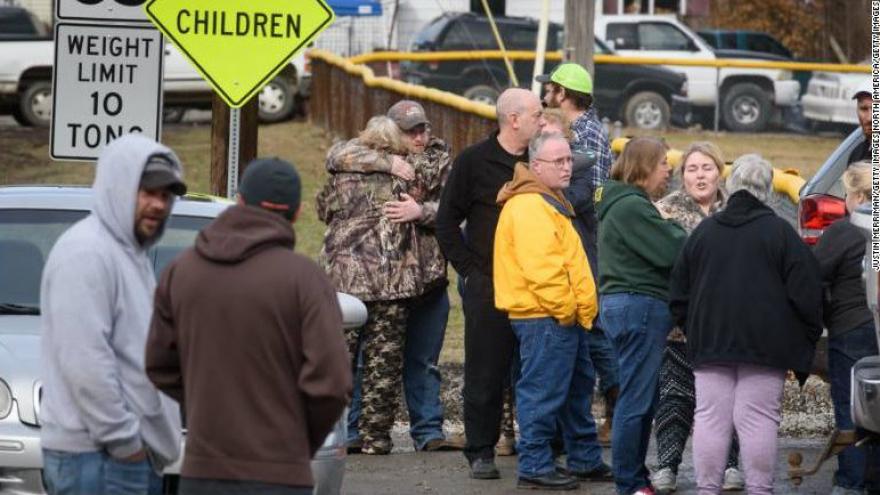 (CNN) -- Four people, who were all in their 20s, were shot and killed Sunday at a southern Pennsylvania car wash.

The shooting happened about 3 a.m. ET in the village of Melcroft, 42 miles southeast of Pittsburgh, according to Pennsylvania State Police. Officers found four bodies and two injured people -- including the suspected gunman, identified as Timothy Smith, 28.

As of late Monday morning, Smith remained on life support and wasn't expected to survive a gunshot wound to his head, said Trooper Robert Broadwater, spokesman for the Pennylvania State Police.

"It is a possibility that the gunshot wound to Smith was self-inflicted, however that determination has not been made at this point," according to the police report.

Smith was wearing a body armor carrier without the ballistic panels inserted. He had several magazines of ammunition and three firearms -- an AR-15 semiautomatic rifle, 9 mm handgun and .308-caliber rifle, police said.

Smith apparently shot the victims with the AR-15 and the 9 mm, police said.

Citing the ongoing investigation, officials said at a press conference that they couldn't comment on the relationship between Smith and the four victims and haven't released a potential motive.

One of the victims, Chelsie Cline, had briefly been involved with Smith, but broke things off months ago, her sister Sierra Kolarik told CNN Pittsburgh affiliate WPXI.

Broadwater would not say how the shooter and victims knew each other, but said the families had been helpful in piecing those relationships together. Cell phone records will help investigators in that respect, as well as with nailing down the shooter's motive, he said.

The victims, Cline, 25, William Scott Porterfield, 27, Courtney Sue Snyder, 23, and Seth William Cline, 21, were shot after they arrived at the self-serve car wash in two cars.

Porterfield and Chelsie Cline arrived together, got out of the car and walked to the side of the business, where they were both killed, police said.

Snyder and Seth Cline arrived in a pickup truck, and they were both shot inside their vehicle while it was stopped.

While shots were being fired into the front of the vehicle, a woman who had been riding in the back seat was able to hide and survived with minor injuries from breaking glass, police said.

"She is cooperating with the investigation," said Sgt. Jeremy Barni of Pennsylvania State Police. "Obviously it's a traumatic experience for her."