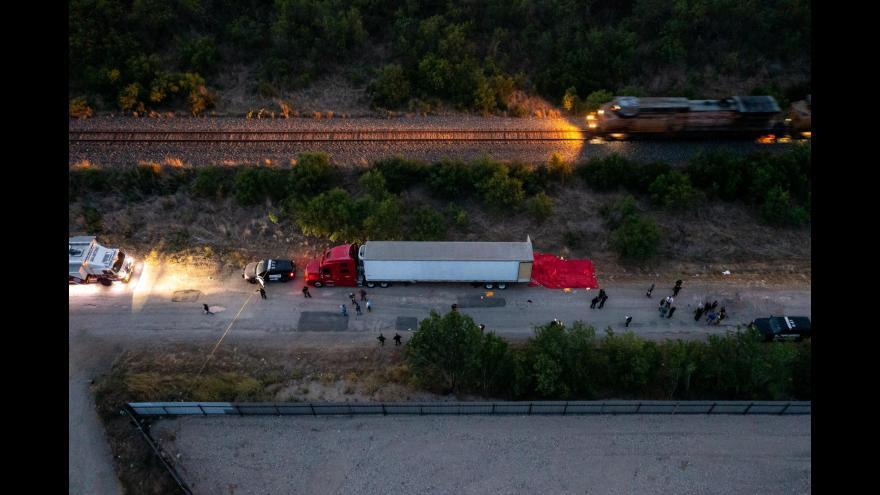 Four men have been indicted in connection with the smuggling operation that left 53 migrants dead after they were trapped in the back of a semitruck in San Antonio, Texas in June.

(CNN) -- Four men have been indicted by federal grand juries in connection with the smuggling operation that left 53 migrants dead after they were trapped in the back of a sweltering semitruck last month, a tragedy one Homeland Security Investigations agent called the deadliest human smuggling incident in US history.

If convicted, the men could face the death penalty on the most serious charges, the DOJ said.

Authorities were able to connect Zamorano and Martinez to the operation through surveillance footage and phone communications obtained through a search warrant, the DOJ said.

Juan Claudio D'Luna-Mendez, 23, and Juan Francisco D'Luna-Bilbao, 48, both citizens of Mexico, are also charged with one count each of possession of a firearm while unlawfully present in the US, according to the DOJ. If convicted, the agency says they could face up to 10 years in prison.

CNN has reached out to attorneys for each man for comment.

D'Luna-Mendez and D'Luna-Bilbao were initially charged the same day the migrants were found, after officers found the license plate on the truck was registered to an address in San Antonio, CNN has previously reported.

While conducting surveillance on the home, police saw both men at the residence and found a firearm in the console of a truck D'Luna-Bilbao was driving.

Both men are Mexican nationals who were residing in the US illegally, according to the affidavit.

In addition to the 53 people who died, nearly a dozen others were hospitalized for heat-related conditions after being stuck inside a refrigerator tractor-trailer that was found abandoned on the outskirts of San Antonio.

Authorities were alerted to the scene on June 27 after an employee working in a nearby building heard cries for help. When they arrived, authorities found the tractor-trailer full of people, some on the ground and in nearby brush, "many of them deceased and some of them incapacitated," according to the DOJ.

Fire officials said patients on the scene were hot to the touch and suffering from heat stroke and exhaustion. The truck had no apparent working air conditioning and there was no sign of water inside, according to San Antonio Fire Chief Charles Hood.

Temperatures on the day the truck was found ranged from the high 90s to low 100s, according to the National Weather Service.