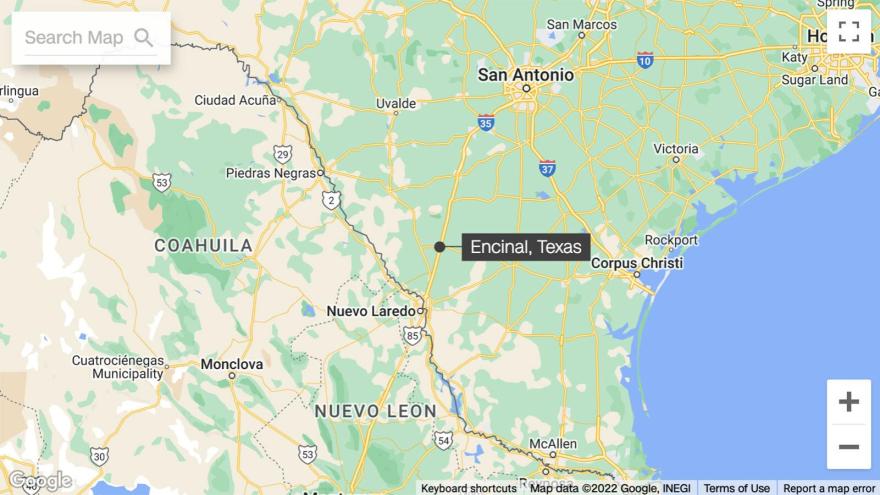 Four migrants were killed and three people critically injured during a chase and crash in Encinal, Texas, in what authorities described as the second deadly human smuggling incident this week near the southern border.

(CNN) -- Four migrants were killed and three people critically injured during a highway chase and crash in Encinal, Texas, in what authorities described as yet another deadly human smuggling incident this week near the southern border.

The crash occurred Thursday on Interstate 35 about 40 miles north of Laredo, according to a tweet Thursday from Lt. Chris Olivarez, a spokesman for the Texas Department of Public Safety (DPS).

Troopers are investigating the fatal crash in which the driver, who is suspected of human smuggling, evaded law enforcement and struck a commercial vehicle, according to a tweet from DPS' South Texas Region.

The driver was been airlifted to a hospital, according to Olivarez.

I-35 is a major north-south route in the central United States for traffic and commerce from the southern border. The route is often exploited by smugglers at a time when record numbers of migrants are being intercepted at the US-Mexico border.

On Monday in San Antonio, about 120 miles north on I-35 from Encinal, 53 migrants died in what a Homeland Security Investigations' official called the deadliest human smuggling incident in US history.

A worker near the interstate called San Antonio police after finding a tractor-trailer abandoned under the hot sun on a back road, with dozens of dead migrants inside. Some victims could be younger than 18.

Authorities in Mexico, Guatemala and Honduras have said they are collaborating with the US in trying to identify the people who died in San Antonio.

More than a dozen people were found alive inside the tractor-trailer and hospitalized for heat-related conditions, authorities said.

Four people have been arrested in connection with the human smuggling incident.

Homero Zamorano Jr., 45, who is originally from Brownsville but resides in Pasadena, Texas, was arrested Wednesday on criminal charges related to alleged involvement in human smuggling resulting in death, according to a US Department of Justice statement.

Zamorano has a lengthy criminal record dating back to the 1990s, public records show.

Laredo Sector Border Patrol surveillance footage showed the tractor-trailer passing an immigration checkpoint, according to the DOJ. The driver could be seen wearing a black shirt with stripes and a hat.

Zamorano matched the driver in the surveillance footage, the DOJ said.

CNN has been unable to determine whether he has an attorney.

Another suspect, Christian Martinez, 28, was arrested on Tuesday in Palestine, Texas, and charged with one count of conspiracy to transport undocumented migrants resulting in death, the DOJ said.

Two other men, Juan Claudio D'Luna-Mendez and Juan Francisco D'Luna-Bilbao, have been charged with "possession of a weapon by an alien illegally in the United States," according to criminal complaints filed Monday.

Authorities located the men after responding to the semi-truck incident, according to the affidavit.