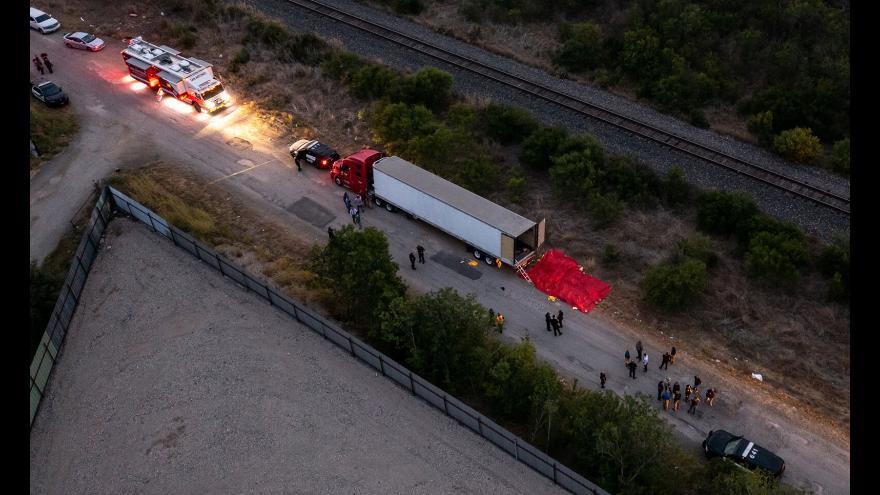 In this aerial view, members of law enforcement investigate a tractor trailer on June 27, 2022 in San Antonio, Texas. More than 50 people were found dead in an abandoned tractor trailer.

(CNN) -- Four people have been arrested and charged after 53 migrants died in what one Homeland Security Investigations agent called the deadliest human smuggling incident in US history.

The migrants were found in sweltering conditions inside a semitruck in San Antonio on Monday after an employee at a nearby building heard cries for help. More than a dozen people were found alive inside the tractor-trailer and hospitalized for heat-related conditions, according to San Antonio authorities.

Homero Zamorano Jr., 45, who is originally from Brownsville but resides in Pasadena, Texas, was arrested Wednesday on criminal charges related to alleged involvement in human smuggling resulting in death, according to a US Department of Justice news release. Zamorano has a lengthy criminal record dating back to the 1990s, public records show.

Christian Martinez, 28, who was arrested on Tuesday in Palestine, Texas, was charged with one count of conspiracy to transport undocumented migrants resulting in death, the DOJ said.

If convicted, both Zamorano and Martinez could face up to life in prison or could face the death penalty. CNN has been unable to determine if Martinez has an attorney.

Zamorano, with his hands and feet in restraints, made his first court appearance before a federal judge in San Antonio on Thursday. At least four US Marshals were in the courtroom as Zamorano was read the charges he faces. Zamorano said that he was not impaired due to mental health conditions, medication or alcohol, after being asked by the judge.

When asked by CNN, Zamorano's attorney said he did not wish to comment.

State prosecutors have filed a motion requesting that Zamorano be detained without bond. His detention hearing is set for July 6 at 11 a.m. CT in San Antonio federal court.

When police arrived on scene Monday, they discovered multiple people inside the tractor-trailer, some on the ground and in nearby brush, "many of them deceased and some of them incapacitated," according to the DOJ release.

"SAPD officers were led to the location of an individual, later identified as Zamorano, who was observed hiding in the brush after attempting to abscond. Zamorano was detained by SAPD officers," the release said.

Laredo Sector Border Patrol also provided Homeland Security Investigations agents with surveillance footage that showed the tractor-trailer crossing through an immigration checkpoint, according to the release. The driver could be seen wearing a black shirt with stripes and a hat.

"HSI agents confirmed Zamorano matched the individual from the surveillance footage and was wearing the same clothing," the release read.

An investigation revealed that communications occurred between Zamorano and Martinez concerning the smuggling event, according to the release.

Two other individuals, Juan Claudio D'Luna-Mendez and Juan Francisco D'Luna-Bilbao, have been charged with "possession of a weapon by an alien illegally in the United States," according to criminal complaints filed Monday. Authorities were able to locate the men after responding to the semi-truck incident, according to the affidavit.

The attorney for D'Luna-Mendez said he does not comment on pending cases. CNN has reached out to the D'Luna-Bilbao's attorney and has not heard back.

No water or working AC inside trailer, fire chief said

The refrigerated semitractor-trailer had no visible working air conditioning unit and there was no sign of water inside, San Antonio Fire Chief Charles Hood told reporters Monday. It's not clear how long people inside the truck had been dead, he said.

High temperatures Monday in the San Antonio area ranged from the high 90s to low 100s, according to the National Weather Service.

"None of these people were able to extricate themselves out of the truck," Hood said. "So they were still in there, awaiting help, when we arrived ... meaning just being too weak -- weakened state -- to actually get out and help themselves."

"In the past, smuggling organizations were mom and pop. Now they are organized and tied in with the cartels. So you have a criminal organization who has no regard for the safety of the migrants. They are treated like commodities rather than people," Larrabee told CNN in a phone interview.

The discovery came as US federal authorities launched what they described as an "unprecedented" operation to disrupt human smuggling networks amid an influx of migrants at the US-Mexico border.

Business owners in the area where the trailer was found told CNN they were in shock.

"They were human beings, it was terrible," said Israel Martinez, 68, co-owner of USA Auto Parts. "We (migrants) come to this country for a better life and yesterday reminded many of us that sadly, some of us achieve it but many others don't do it."