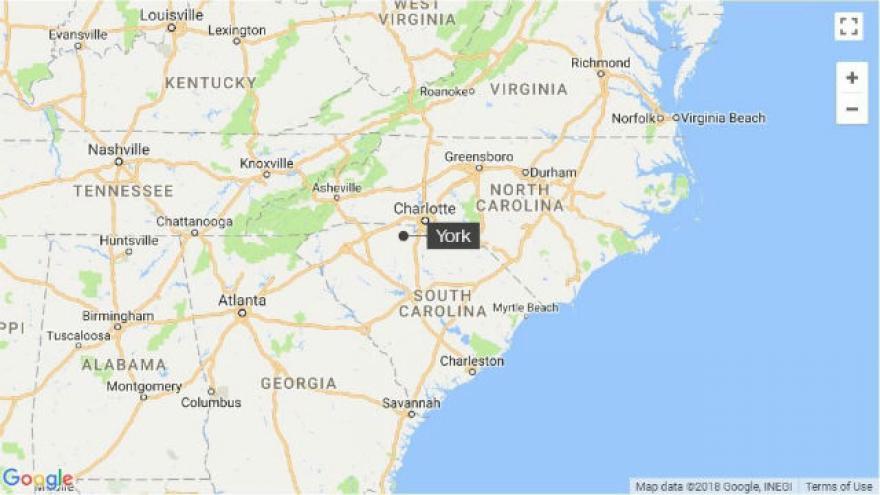 A man shot and injured four law enforcement officers early Tuesday, January 16, 2018, near a South Carolina home, a sheriff\'s spokesman said, after deputies initially were called there for a complaint of domestic violence. Photo courtesy from Google

(CNN) -- A man shot and injured four law enforcement officers -- one of them critically -- early Tuesday near a South Carolina home, a sheriff's spokesman said, after deputies initially were called there for a complaint of domestic violence.

The man suspected of firing the shots, Christian Thomas McCall, first struck one deputy near the home outside the city of York and then hit the others a couple hours later, York County Sheriff's Office spokesman Trent Faris said.

McCall, 47, was injured when officers returned fire during the second exchange, which ended a nearly six-hour ordeal in which officers were looking for him, Faris said.

The wounded officers were taken to a hospital with gunshot wounds, including two by helicopter, Faris said.

They are, according to York County Sheriff Kevin Tolson:

• Sheriff's Sgt. Randy Clinton, the first deputy who was shot

Doty, who has been with the sheriff's office for 12 years, was in critical condition and "hanging onto life," Tolson said Tuesday afternoon. The injuries to Clinton and Brown do not appear to be life-threatening, the sheriff said.

"We need your continued prayers," Doty said. "I certainly want to thank the public for the outcry of support that we have felt thus far."

One officer was recovering from surgery, and the others either were undergoing or awaiting surgery, he said.

McCall also was taken to a hospital and was in surgery late Tuesday morning, Faris said. Information on his condition was not released.

Sheriff's deputies initially went to the home outside York, a city of about 7,000 people roughly 12 miles south of the North Carolina state line, after 10 p.m. Monday, after someone called authorities to say a male was hitting a female there, Faris said.

The suspect, McCall, left the home on foot before deputies arrived, Faris said, and police dogs were brought in to search for him.

During the search, McCall fired a gun from somewhere near the home shortly after 1 a.m. Tuesday, hitting Clinton, a deputy who handles one of the dogs, Faris said.

More officers arrived and searched near the home.

Shortly after 3:30 a.m., McCall fired again, and officers returned fire, Faris said. McCall, as well as two deputies and the York officer, were injured in that shootout.

Asked about the woman who was allegedly hit, Tolson said only that she was not seriously injured.

The county solicitor, Kevin Brackett, told investigators that they have probable cause to seek warrants charging McCall with three counts of attempted murder for the shootings of Clinton, Brown and Cummings, Brackett said.

Brackett said that because of Doty's condition, it wasn't yet appropriate to decide on a charge in his shooting. No charges were immediately filed.

McCall also could be charged with the possession and use of a firearm in the commission of a violent crime, and a first-degree domestic violence charge, Brackett said.