4 states may be able to reopen in early May 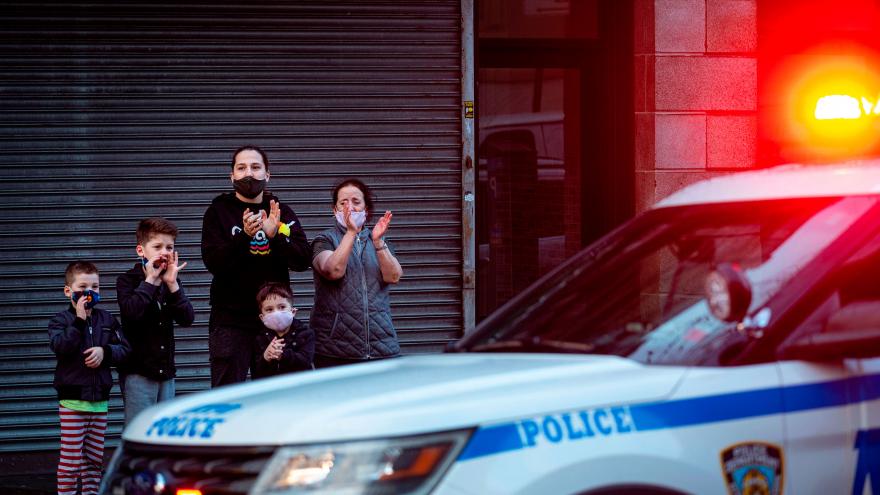 (CNN) -- At least four states may be able to loosen social distancing measures next month, an influential model tracking the coronavirus pandemic says.

The model's new projections show that Vermont, West Virginia, Montana and Hawaii could open as early as May 4.

Other states including Iowa, North Dakota, South Dakota, Nebraska, Utah, Arkansas and Oklahoma may need to wait until late June or early July.

Dr. Christopher Murray, the model's maker and director of the Institute for Health Metrics and Evaluation at the University of Washington, said the challenge will be figuring out how to reopen the US economy and allowing people to get back to work without sacrificing mitigation.

"Each state is different," Murray said. "Each state has a different public health system, and different capabilities. This is not a 'one decision fits all' situation."

The model is now estimating a total of 60,308 deaths in the US by August 4. That's about 8,500 fewer deaths than predicted on Monday.

As of Friday, the pandemic has killed more than 36,700 people in the US and infected more than 699,000, according to a tally by Johns Hopkins University.

The university's daily death tallies have surged recently, after some states began to report probable Covid-19 deaths. These are deaths where patients had symptoms of the disease but no lab test confirming it. It's not always clear when those deaths happened, so it is difficult to compare JHU's death count day by day.

As some states extended their stay-at-home orders earlier this week, Jacksonville, Florida, beaches and parks reopened on Friday.

Beaches will be open from 6 to 11 a.m. and from 5 to 8 p.m. daily with some restrictions, according to the city's website. Activities such as sunbathing or any type of group activity will not be allowed at beaches during the restricted hours and items like towels, blankets, chairs, coolers and grills will not be permitted on the beach.

Texas and Vermont have announced plans to reopen some sectors in the coming weeks.

Texas Gov. Greg Abbott announced a statewide task force of medical and economic experts to oversee the reopening of the state, with early May as a target date. Schools will be closed for the remainder of the school year.

"We have demonstrated that we can corral the coronavirus," Abbott said, pointing to a statistic that Texas has the "second-most recoveries from Covid-19 of all states in America."

There are more than 17,300 coronavirus cases reported so far in the state of 29 million people, and 428 coronavirus-related fatalities. An estimated 4,190 patients have recovered from the virus.

Some states 'can't wait for feds any longer'

Vice President Mike Pence said there are enough Covid-19 tests to reopen states under the White House guidelines as governors have been asking for federal help for testing.

"Our best scientists and health experts assess that states today have enough tests to implement the criteria of phase one if they choose to do so," Pence said Friday during a White House coronavirus briefing.

Pence said that the administration is going to continue to scale testing as needed, calling on states to manage testing.

While the American Clinical Laboratory Association, which represents commercial labs such as LabCorp and Quest Diagnostics, has said capacity is not an issue, others said critical shortages are hampering testing.

Laboratories are "working day and night to expand testing capacity but are severely hampered by shortages of needed reagents, swabs for testing, PPE, and specialized equipment designed by companies to be used with their own machines," the Association of American Medical Colleges said in a a Monday letter to the White House Coronavirus Task Force.

Connecticut Gov. Ned Lamont said he's taking it upon himself to make sure his state has everything they need to make it happen.

"I can't wait for the feds any longer," Lamont said.

Earlier, New York Gov. Andrew Cuomo said states generally don't have enough money to pay for testing and his state doesn't have a "system" to deal with the kind of volume needed.

New York has by far the most coronavirus cases in the US. Unlike hospitalizations and ICU admissions, the number of deaths -- 630 Thursday, against 606 the day before -- "refuses to come down dramatically," the governor said.

The White House gave all 50 governors a suggested three-phase approach to easing social distancing. President Donald Trump, in a retreat from his earlier claims that it was his call, told governors that when and how to reopen is up to them.

Trump tweeted that Minnesota, Michigan and Virginia should "liberate." Those states have Democratic governors. During Friday's White House coronavirus briefing, Trump addressed his tweets, saying the governors who are implementing federal guidelines for stay-at-home orders to deal with the coronavirus are being "too tough."

When asked whether those states should lift their orders, Trump said "No, but I think elements of what they've done are too much. It's just too much."

Michigan had a large protest earlier this week over its stay-at-home order.

"His unhinged rantings and calls for people to 'liberate' states could also lead to violence," Inslee said in a statement. "We've seen it before."

How the federal guidelines would work

The federal three-phase guidelines to reopen the economy rely on "gating" criteria that states would have to pass before starting each phase.

The criteria include a "downward trajectory" of Covid-19 cases in a 14-day period, and a return to pre-crisis conditions in hospitals, according to a document outlining the plan.

In the first phase, schools currently closed should remain so, and employees who are able to telework should keep working from home. Large venues, including some restaurants and gyms, could operate under strict social-distancing protocols, but bars should remain shuttered.

Phases 2 and 3 would gradually decrease the recommended restrictions. Vulnerable populations would remain sheltered in place until phase 3.

The phased approach encourages all individuals to "strongly consider" using face coverings in public. And the document encourages employers to use social distancing, temperature checks, testing and sanitation practices in their workplaces.

The guidelines are "sound," Dr. Tom Frieden, former director of the US Centers for Disease Control and Prevention (CDC), said during a Vital Strategies webinar.

He and many other experts and officials, including governors, are stressing that more detailed plans about diagnostic testing, antibody testing and contact tracing are needed before the economy can reopen safely.

"We need to find a way to have testing (that is) widely, easily accessible, it is agnostic to your insurance status, and it is ... aggressive ... where there are potentially no cases," Dr. John Lynch, board member of the Infectious Diseases Society of America, said in a separate webinar.

The CDC plans to build "surveillance sites" in some of its clinics and indigenous population clinics, to "identify and understand how much asymptomatic infection is there," CDC director Dr. Robert Redfield told NBC's "Today" show.

Some states already have said they're banding together in regional groups to decide when to reopen. That includes states on the West Coast; seven states in the Northeast; and a group encompassing Ohio, Illinois, Michigan, Wisconsin, Minnesota, Indiana and Kentucky.

Some governors are warning about the dangers of easing restrictions too soon after Trump unveiled his reopening guidelines and said a shutdown is not a sustainable, long-term solution.

"We must get this right because the stakes are very high. If we don't do it right, the consequences are horrendous," Ohio Gov. Mike DeWine said Thursday. "It's going to be gradual. It's going to be rolling it out one thing after another."

Vermont will start to ease restrictions Monday -- but very slowly and with lots of caveats.

On May 1, farmers markets will be able to operate with strict social-distancing guidelines in place, Scott said.

The number of new cases is dropping in some states, but health officials have also identified new outbreaks. In New Hampshire, for example, clusters were identified at three long-term care facilities.

Nationally, the backbone of the $2 trillion stimulus designed to keep workers employed shuttered after only two weeks, with tens of thousands of businesses not able to get money before it went dry. Talks to refill it have stalled, so far.

In total, 22 million people have filed first-time unemployment claims since mid-March as the pandemic forced businesses to close.

Florida's unemployment system has been so overwhelmed, hundreds of people have been added to the state's call centers to process claims. Staffing is up to 2,000, from 30 a month ago, Gov. Ron DeSantis said.

Where all 50 states stand on reopening