40 Confederate symbols have been removed since the death of George Floyd, SPLC says 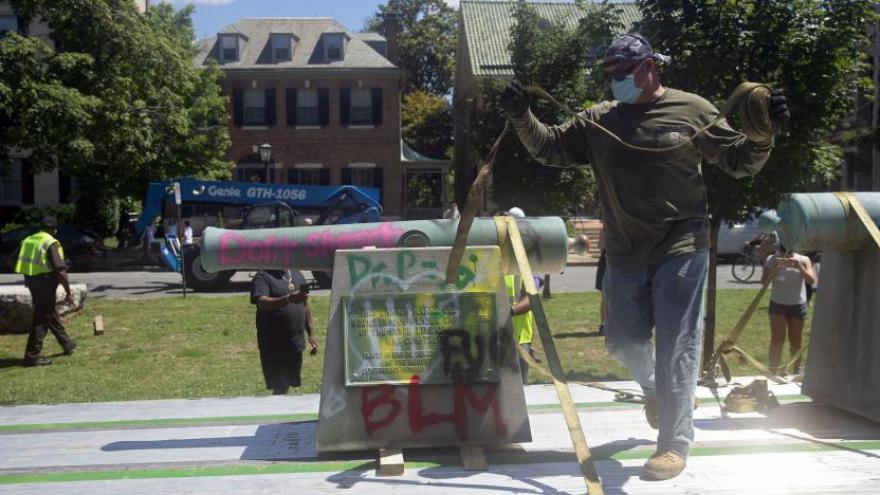 40 Confederate symbols have been removed since the death of George Floyd, SPLC says.

(CNN) -- At least 40 Confederate symbols have been removed from across the US since George Floyd's death in May, according to the Southern Poverty Law Center.

From 100-year-old monuments to a state flag, a total of 45 have been removed or relocated from public spaces, the SPLC reported. And another 14 have been renamed, such as schools and roads.

The controversy surrounding these symbols was once again thrust into national debate following Floyd's death. The 46-year-old Black man spent the last minutes of his life with an officer's knee pressed to his neck. His final words, "I can't breathe," became a rallying cry for those fighting against police brutality and racial injustice -- an injustice many say is reinforced by Confederate symbols.

While some cities have passed laws to protect Confederate symbols, saying they mark history and honor heritage, other cities have made efforts to remove them.

In Richmond, Virginia, Mayor Levar Stoney ordered the immediate removal of several Confederate statues in a video to the public on July 1.

"These statues, although symbolic, have cast a shadow on the dreams of our children of color," Stoney said. "Let me be clear, removing these monuments is not a solution to the deeply embedded racial injustices in our city and nation, but is a down payment."

And on May 31, when protesters took matters into their own hands to remove a 115-year-old monument in Birmingham, Alabama, Mayor Randall Woodfin told demonstrators he would "finish the job" for them.

The conversation on removal has been one the nation continues to revisit. More than 125 Confederate symbols have been removed since Dylann Roof killed nine African Americans in a Charleston, South Carolina, church in 2015. And the conversation was reignited after white nationalists marched in 2017 to protest the removal of a Robert E. Lee statue in Charlottesville, Virginia, where a counterprotester was killed amid violent clashes between demonstrators.

Nearly 1,800 Confederate monuments, parks, schools, state holidays and other symbols of the Confederacy remain in public spaces across the South and the nation, according to the SPLC.