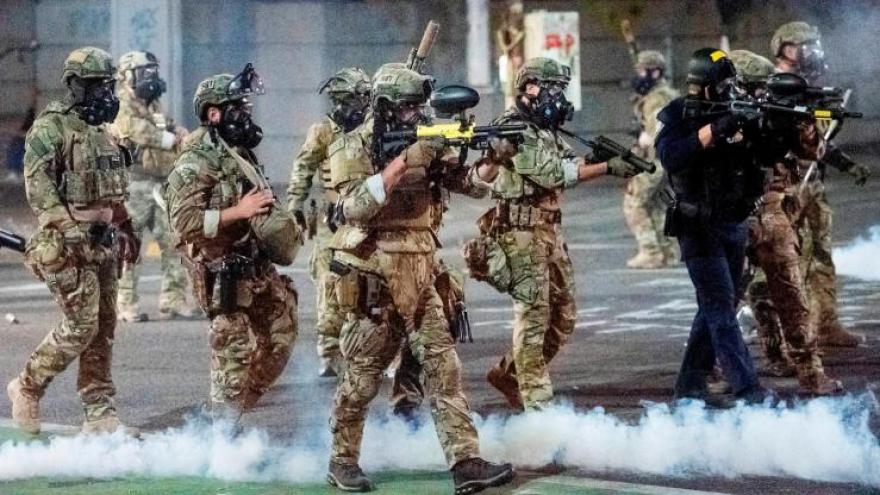 (CNN) -- There have been 43 federal arrests in Portland, Oregon, where there's been unrest in a portion of the city, since July 4, acting Homeland Security Secretary Chad Wolf said Tuesday.

The federal presence in Portland has come under increased scrutiny by local officials and lawmakers who have urged the Trump administration to pull back.

While the protests are generally peaceful, there have been moments of violence late at night and in the early hours of the morning. Unrest has persisted in an area around a federal courthouse for more than 50 days.

"What is occurring in Portland in the early hours of the morning is not peaceful protesting," Wolf said, insisting that the department respects the rights of peaceful protesters.

On Monday night, there were seven arrests, said Federal Protective Service Deputy Director of Operations Richard Cline. Two of the arrests involved assault on a federal law enforcement officer and the other five were misdemeanor charges, like vandalism.

Cline and acting Customs and Border Protection Commissioner Mark Morgan walked through the different uniforms used by personnel, displaying photos of each uniform on a screen. In recent days, reports out of Portland about unidentified officers arresting protestors raised concern about which agency, and who, was arresting people on the ground.

Wolf was critical of Portland city officials, who he accused of not doing enough to protect federal property. He said if federal forces were to leave as city officials and protesters have demanded, the federal building would be burned to the ground.

"I'm ready to pull my officers out of there if the violence stops," Wolf said, adding that the city is different from others around the country in that they are specifically looking after federal property.

Portland Mayor Ted Wheeler pushed back in a statement to CNN.

"Federally-directed intervention is uninvited, untrained, and unwelcome," Wheeler said. "The acting secretary knows we feel that way, but we're happy to tell him again. The violence was being contained and started to de-escalate before they arrived. They intervened and escalated tensions to new levels."