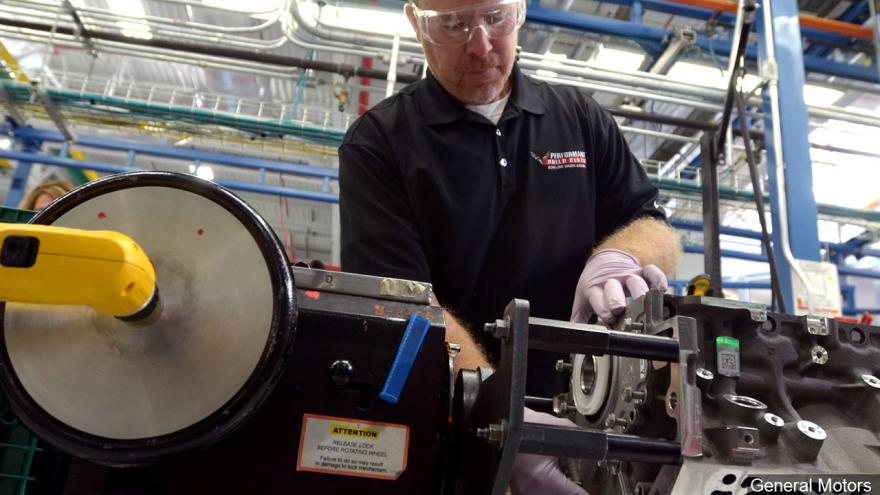 (CNN) -- The United Auto Workers union went out on strike against General Motors Sunday night, the first work stoppage in the US auto industry in 12 years.

The union's 46,000 hourly workers walked out at 31 GM factories and 21 other facilities, spread across nine states, mostly in the center of the country. It's the largest strike by any union against any business since the last strike at GM in 2007.

The strike started at 11:59 pm Sunday night. The two sides did not formally meet Sunday after the union declared its intention to strike at a morning press conference, although union spokesman Brian Rothenberg said that the dialogue between the two sides was ongoing. A new meeting of the two sides is set for 10 a.m. Monday.

The union said that GM was putting profits ahead of employees who helped to turn the company around when it went through bankruptcy and federal bailout a decade ago.

The company said it made a substantial offer that includes improved pay and profit sharing for union members, along with investment to bring new jobs. It also promised a "solution" for two of the four plants currently slated for closure: one in Detroit and another in Lordstown, Ohio.

The company did not say what the solution would be. But a person familiar with GM's offer said it included a promise to build a new electric truck at Detroit Hamtramck, and to build new batteries for electric vehicles in Lordstown. That work wouldn't start immediately, so the plants would likely remain dark for some time. Work would start sometime in the next four years if the offer is accepted.

A source close to the UAW with direct knowledge of negotiations said most of the proposals the company disclosed publicly on Sunday came very late in negotiations Saturday.

GM announced plans in November of 2018 to shut the Detroit and Lordstown assembly plants, along with transmission plants in Baltimore and Warren, Michigan.

The UAW has vowed that keeping the plants open would be a key bargaining demand. Late Saturday it said while there had been progress in the talks there was still "significant differences between the parties on wages, health care benefits, temporary employees, job security and profit sharing."

GM says its average hourly employee earns about $90,000 per year, not including benefits. But the number of hourly workers at GM has declined sharply in recent decades, due to a combination of automation, lost market share and outsourcing. But GM still builds the overwhelming majority of cars it sells in the US market in North America. And it has far more factories in the United States than it does in Mexico or Canada.

The union had earlier extended the contracts at two other US automakers with UAW contracts, Ford and Fiat Chrysler, as it targeted GM in an effort to reach a deal that would set a pattern for the industry. The union announced late Saturday while membership would work past the original 12:01 a.m. ET contract expiration early Sunday, there would be no long-term extension of the contract at GM if the two sides did not reach a deal on Sunday.

All three automakers are dealing with slower sales and the need to make huge multi-billion-dollar investments in developing electric and self-driving vehicles that have more long-term potential than current market demand.

It was the need to save money for those efforts that GM halted operations at three US plants — including the assembly line in Lordstown, and announced plans to shut the Hamtramck plant, its last Detroit factory, early next year.

But negotiations come as the union is hit by a scandal involving misappropriation of union funds, and in some cases, union officials accepting bribes from officials at Fiat Chrysler. Nine people associated with the union or Fiat Chrysler have already pleaded guilty to federal charges.

Last week, the Detroit News reported the union's president, Gary Jones, was the unnamed union official identified in the most recent indictment as "UAW Official A." The union has not responded to a request for comment about that report.

Experts say the scandal will make it more difficult to get rank and file union members at the automakers to ratify any tentative deal reached by union leadership. Four years ago the deals all passed by only narrow margins, even though there was no scandal at that time.

The last strike 12 years ago lasted only three days, but some strikes against GM in the past have stretched on for months. For many of the employees hired since 2007, this is their first work stoppage.