46 migrants have been found dead inside a semi-truck in San Antonio and 16 have been hospitalized, authorities say 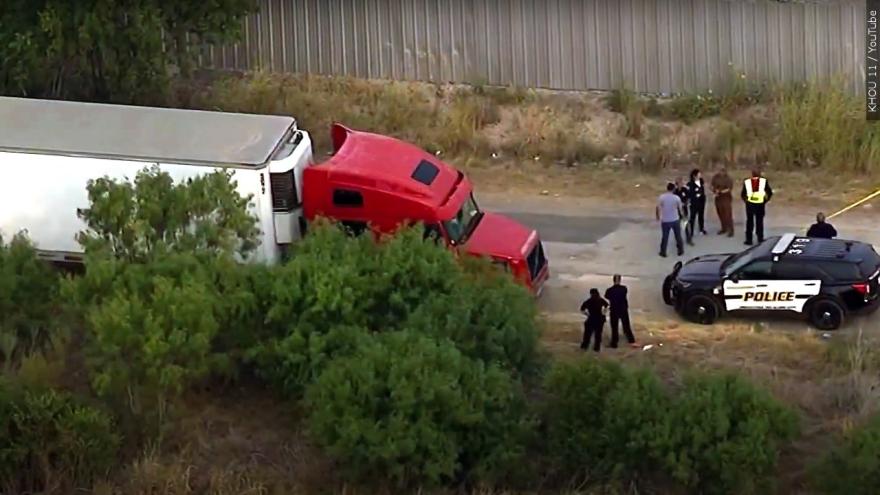 (CNN) -- At least 46 people were found dead inside of a semi-truck in San Antonio Monday, according to authorities, in a scene that Mayor Ron Nirenberg called a "horrific human tragedy."

Earlier on Monday night, city councilwoman Adriana Rocha Garcia referred to the victims as migrants, after she was briefed on the situation by the San Antonio police chief.

Authorities were alerted to the scene just before 6 p.m., when a worker in a nearby building heard a cry for help, San Antonio Police Chief Bill McManus said at a news conference Monday night. The worker found a trailer with doors partially opened and saw a number of people deceased inside, McManus said.

Sixteen people -- 12 adults and four children -- have been taken to nearby medical facilities for further care, according to San Antonio Fire Chief Charles Hood.

Those who were found alive were hot to the touch and suffering from heat stroke and exhaustion, Hood said, and were conscious when transported for care. There was no sign of water in the refrigerated tractor trailer and no visible working air conditioning unit, he said.

High temperatures in the San Antonio area ranged from the high 90s to low 100s on Monday, according to the National Weather Service.

Officials said they are hopeful that those transported for treatment will recover. Three of the migrants found were taken to Methodist Hospital Metropolitan and are in stable condition, according to a spokesperson for Methodist Healthcare.

Three people are in police custody, McManus said, but added it's unclear if they are connected to the situation.

The 60 firefighters that were on scene are being put through a critical incident stress debriefing, Hood said.

"We're not supposed to open up a truck and see stacks of bodies in there. None of us come to work imagining that," the fire chief said.

"It's tragic," Mayor Nirenberg said Monday. "There are, that we know of, 46 individuals who are no longer with us, who had families, who were likely trying to find a better life. And we have 16 folks who are fighting for their lives in the hospital."

The US Department of Homeland Security's investigation unit was alerted by San Antonio police to "an alleged human smuggling event" and is leading the investigation, a spokesperson from Immigration and Customs Enforcement said Monday.