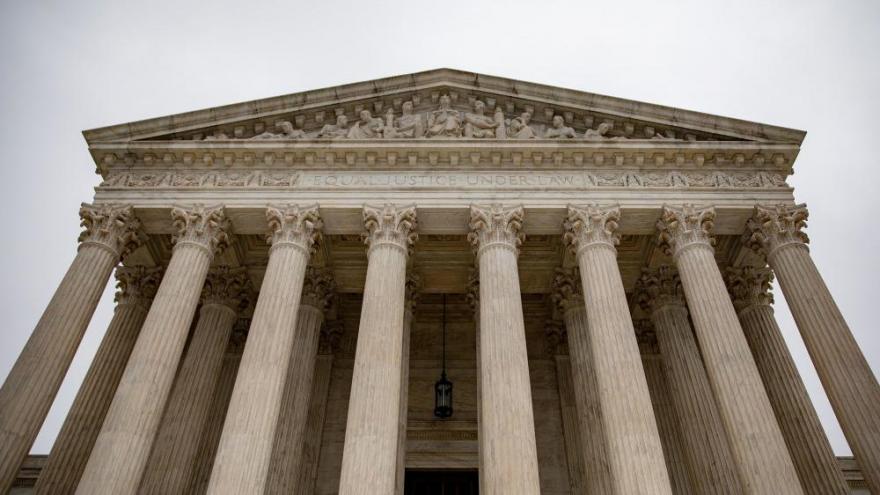 The Supreme Court Monday in a 5-4 vote cleared the way for the Trump administration to make it more difficult for immigrants who rely on public assistance to obtain legal status. An overcast sky hangs above the U.S. Supreme Court on December 16, 2019 in Washington, DC.

(CNN) -- The Supreme Court in a 5-4 vote Monday cleared the way for the Trump administration to make it more difficult for low-income immigrants seeking to come to or trying to remain legally in the United States.

The so-called public charge rule, unveiled in August, impacts people who rely on public assistance, including most forms of Medicaid, food stamps and housing vouchers.

It made national headlines last summer when then-acting Director of US Citizenship and Immigration Services Ken Cuccinelli, in his defense of the rule, revised the iconic poem on the Statue of Liberty's pedestal, saying: "Give me your tired and your poor who can stand on their own two feet and who will not become a public charge."

Advocates and several states immediately opposed the rule, arguing that the changes would penalize immigrants who rely on temporary assistance from the government and impose costs on the states.

Monday's vote split along ideological lines, with the five conservative justices in the majority.

The order was also issued while Chief Justice John Roberts was presiding over the impeachment trial of President Donald Trump in the US Senate across the street from the Supreme Court.

The Trump administration's immigration policies have repeatedly met with legal challenges, resulting, in some cases, in lower courts blocking the policies from taking effect across the country, as happened with the public charge rule.

Monday's order means the rule can go into effect in every state, pending appeal, except for Illinois which is covered by a separate injunction.

The rule will affect people who are trying to obtain lawful permanent status, otherwise known as a green card. To that end, the rule has the potential to reshape legal immigration by limiting access to green cards for lower-income immigrants.

A New York judge last fall issued a nationwide injunction blocking the rule. Solicitor General Noel Francisco appealed that ruling to the Supreme Court, asking the justices to allow the rule to go into effect while the appeals process played out.

Justices Neil Gorsuch and Clarence Thomas wrote separately to criticize nationwide injunctions -- court orders that block a policy across the country -- like the one that had been issued in the case.

It is an issue of deep concern for Francisco and Attorney General William Barr, who have complained that the government has been stymied by injunctions blocking their policies for months until the court process plays out.

In a speech to the American Law Institute last year, Barr said that "nationwide injunctions" have "frustrated presidential policy for most of the President's term with no clear end in sight." As an example, he noted injunctions that blocked the Trump administration's decision to rescind the Obama-era Deferred Action for Childhood Arrivals program.

At the time, Barr noted, "We are more than halfway through the President's term, and the administration has not been able to rescind the signature immigration initiative of the last administration, even though it rests entirely on executive discretion."

The Court has since taken up the DACA issue and will rule before July.

Gorsuch and Thomas noted that the issue surrounding the public charge rule had been percolating through several courts within a "hodge-podge" of jurisdictions but that one judge was able to block the rule nationwide.

"By their nature, universal injunctions tend to force judges into making rushed, high-stakes, low-information decisions," Gorsuch, joined by Thomas, wrote. They urged the Supreme Court to step in at an "appropriate juncture" to take up a case concerning the "rise" of nationwide injunctions.

The "public charge" provision dates back at least to the Immigration Act of 1882. Federal lawmakers at the time wanted to make sure that immigrants would be able to take care of themselves and not end up a public burden.

Under current regulations put in place in 1996, the term is defined as someone who is "primarily dependent" on government assistance, meaning it supplies more than half their income.

But it only counted cash benefits, such as Temporary Assistance for Needy Families or Supplemental Security Income from Social Security. The administration's new rule widens the definition of who is expected to be dependent on the government by including more benefit programs.

It's hard to know exactly how many people would be affected by the regulation because it's largely subject to the discretion of the officer who will take into account whether someone is likely to become a public charge.

Opponents of the rule, such as Susan Welber, a staff attorney at the Legal Aid Society, said that the government was trying to exclude "as unworthy and unwelcome anyone who is predicted to receive even a small amount of food, health or housing assistance at any point."

"We are very disappointed in the Supreme Court's decision, and the irreparable consequences it will have for immigrants and their families across the nation, but we continue to believe that our legal claims are very strong that we will ultimately prevail in stopping this rule permanently," Welber said in a statement Monday.

This story has been updated with details of the rule and the court's order.