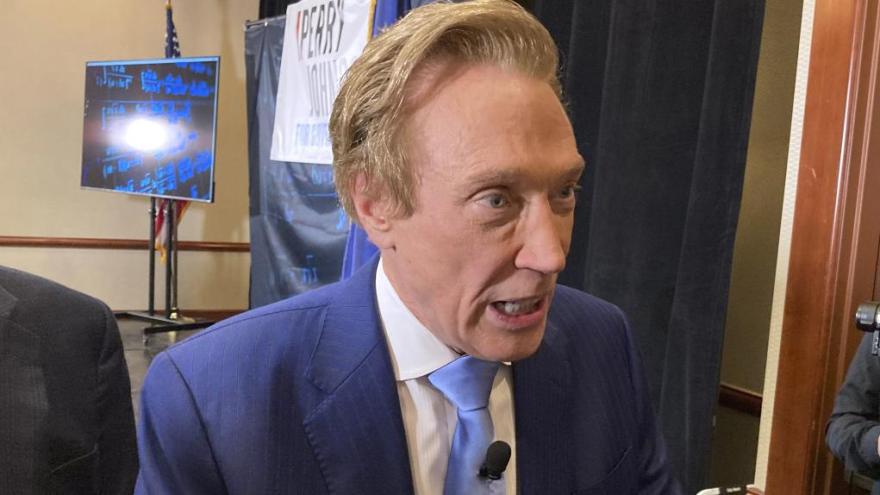 The elections bureau staff found that Republican candidates for Michigan governor James Craig and Perry Johnson, seen here on February 23, had too few valid signatures to qualify for the ballot.

(CNN) -- Five Republican candidates for Michigan governor could be deemed ineligible to appear on the primary ballot after the Michigan elections bureau found invalid signatures on their nomination petitions.

The development could scramble the fast-approaching primary on August 2 and winnow the crowded field of 10 Republicans jockeying for the nomination to take on Democratic Gov. Gretchen Whitmer.

The elections bureau staff found that two leading candidates -- former Detroit Police Chief James Craig and businessman Perry Johnson -- had too few valid signatures to qualify for the ballot. The bureau staff also recommended that three other GOP candidates be excluded from the ballot -- Michael Brown, Donna Brandenburg and Michael Markey -- for a similar reason.

A gubernatorial candidate in Michigan needs at least 15,000 valid signatures to qualify for the ballot.

Michigan's Board of State Canvassers -- made up of two Republicans and two Democrats -- is slated to meet Thursday to decide whether to adopt the election bureau's recommendations.

In a report released late Monday, elections bureau staff said they had identified 36 petition circulators who submitted at least 68,000 invalid signatures across multiple petition drives for various offices in what the report described as a widespread case of forgeries in signature gathering. The invalid signatures extended beyond those collected for gubernatorial candidates.

"The Bureau is unaware of another election cycle in which this many circulators submitted such a substantial volume of fraudulent petition sheets consisting of invalid signatures, nor an instance in which it affected as many candidate petitions as at present," the report said.

The report said the agency "does not have reason to believe that any specific candidates or campaigns were aware of the activities of fraudulent-petition circulators."

In a statement, Johnson called the state's petition process "fatally flawed," saying it "easily allows criminals to victimize candidates for public office and their thousands of supporters who legitimately sign petitions."

Johnson said candidates need a way to compare signatures gathered by circulators with the official signatures on Michigan's voter file.

The Michigan governor's race, along with contests for state attorney general and secretary state, is expected to be competitive this fall, four years after Democrats swept all nonjudicial statewide offices.