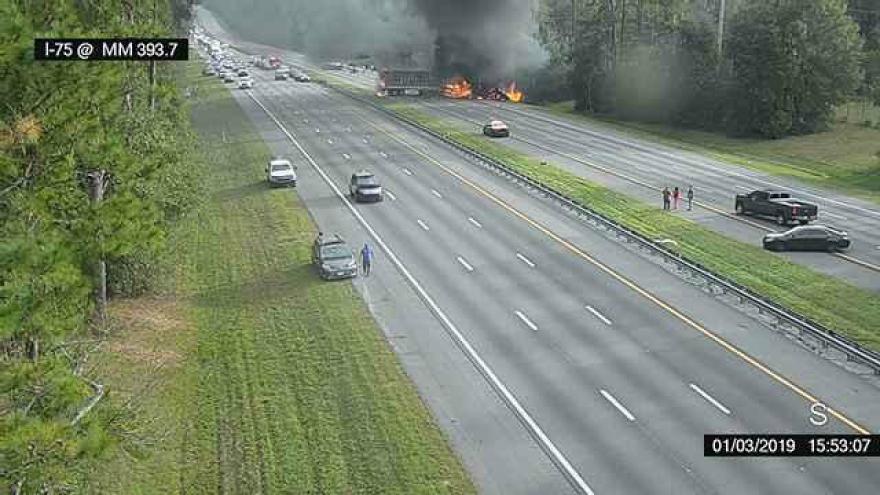 Seven people are dead and several have been transported from the scene of a fiery multivehicle crash on Interstate 75 southbound near Gainesville, Florida, according to authorities. Photo courtesy Alachua County Fire Rescue

(CNN) -- A Louisiana congregation was in mourning after five children riding in a church van bound for Disney World were killed in a fiery Florida crash.

Bryan Ross, affiliated with Avoyelles House of Mercy, said that the group, which included the pastor's wife, had set off from Marksville on Thursday morning.

The multivehicle crash happened on Interstate 75 near Gainesville, according to authorities.

Riordan said preliminary information indicates that a tractor trailer and a car traveling northbound on I-75 collided with each other and went through a guardrail, entering the southbound lanes. Those two vehicles then struck the large passenger van and another semi-truck. A fifth vehicle struck some of the occupants or debris in the roadway, Riordan said.

Three girls and two boys in the van died. The condition of the pastor's wife was unknown.

A photo posted by the Alachua County Fire Rescue showed a tractor-trailer in flames with a vehicle under its left side.

As many as eight others were hurt, the lieutenant said. Some of the patients transported from the scene have critical injuries, according to the fire and medical service.

The FHP will issue a detailed statement on the accident after the families of the victims have been notified.