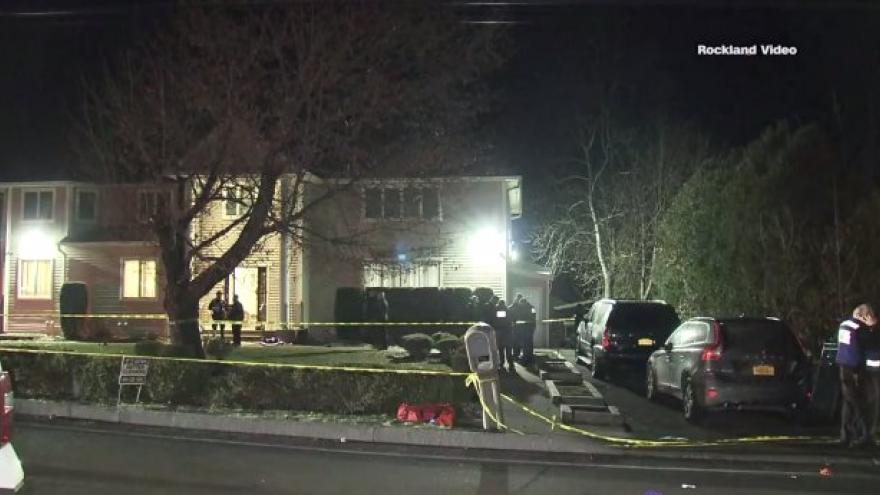 (CNN) -- A man walked into a rabbi's home during a Hanukkah celebration in a New York suburb Saturday night and began stabbing people, witnesses say. Five victims were taken to nearby hospitals, according to police.

The Orthodox Jewish Public Affairs Council for the Hudson Valley Region said in a tweet that victims inside the Monsey residence were Hasidic Jews. Two people are in critical condition, co-founder of the council, Yossi Gestetner, told CNN.

The attacker pulled out a knife that was "almost like a broomstick," said Aron Kohn, who attended the Hanukkah celebration.

Kohn said there were at least 100 people in the home at that time, as the rabbi was "lighting the candle" on the seventh night of Hanukkah.

Kohn added that the suspect tried to run into a nearby synagogue, but someone closed the doors.

Rockland County -- where the stabbing took place -- has the largest Jewish population per capita of any US county, according to New York state. More than 30% of its residents are Jewish.

He said a suspect, described as a tall black man, was apprehended by police.

A latest in a string of attacks

New York Gov. Andrew Cuomo said the stabbing was "the latest in a string of attacks against members of the Jewish community in New York this week."

"Let me be clear: anti-Semitism and bigotry of any kind are repugnant to our values of inclusion and diversity and we have absolutely zero tolerance for such acts of hate," the governor said in a statement.

He directed the state's Hate Crime Task Force to investigate the incident. The Anti-Defamation League (ADL) of New York also said they were heading to the scene to learn more and coordinate with law enforcement.

And last week, New York Mayor Bill de Blasio said the city's police department would be boosting its number of patrols after at least eight possible anti-Semitic incidents in a week.

Police will increase visits to houses of worship and 'other critical areas in the community," he said.

In a statement to CNN, Israel's President Reuven (Ruvi) Rivlin expressed being "shocked and outraged" by the stabbing.

"We are praying for the rapid recovery of those injured. The rise of anti-Semitism is not just a Jewish problem, and certainly not just the State of Israel's problem. We must work together to confront this evil, which is raising its head again and is a genuine threat around the world," the statement said.

In response to the attack, Prime Minister Benjamin Netanyahu said Israel would work with local authorities to deal with incidents of anti-Semitism.

"Israel condemns in every sense the latest anti-Semitic incidents and the brutal attack in the middle of Hanukkah at the rabbi's house in Monsey, New York. We send wishes for a speedy recovery to the injured," he said at the start of the weekly cabinet meeting. "We will work together in every way with the local authorities in order to help eliminate this phenomena. We offer our help to all countries."

'We cannot overstate the fear people are feeling'

As authorities began investigating the scene of the stabbings, officials began sharing messages of solidarity and resilience.

New York Attorney General Letitia James said there was "zero tolerance for acts of hate of any kind and we will continue to monitor this horrific situation."

"I stand with the Jewish community tonight and every night," James said in a tweet.

After Saturday's stabbing, de Blasio said "many Jewish families in our city have close ties to Monsey. We cannot overstate the fear people are feeling right now."

"We will NOT allow this to become the new normal," de Blasio tweeted. "We'll use every tool we have to stop these attacks once and for all. The NYPD has deployed a visible and growing presence around Jewish houses of worship on the streets in communities like Williamsburg, Crown Heights and Boro Park."

The ADL's CEO Jonathan Greenblatt said it was "heart-wrenching to see the holiday of Hanukkah violated yet again" following last week's "hateful assaults."

"We are outraged because the answer is clear: the Jewish community NEEDS greater protection," Greenblatt tweeted.

"Whether worshiping in synagogue, shopping in the supermarket or celebrating at home, Jews should be safe from violence. We need authorities to provide increased protection NOW and ensure that the full force of the law is brought down on those who perpetrate such horrific crimes," Greenblatt said.