5 ways the stimulus package is expected to reduce poverty 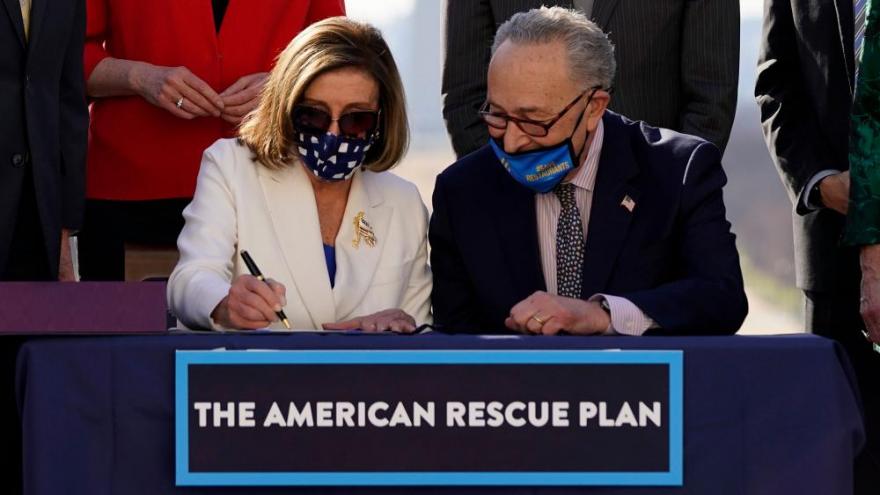 (CNN) -- President Joe Biden's sweeping $1.9 trillion relief package represents one of the largest federal efforts to reduce poverty in the last half century.

The massive legislation, which the President signed Thursday, provides aid to low-income Americans in numerous ways. Attention has focused on the third round of direct stimulus payments, but the bill also offers parents a guaranteed stream of income and gives childless workers a bigger tax break. And it will extend enhanced food stamp benefits and federal help for the unemployed, along with providing housing assistance and more generous health insurance subsidies.

The package's key measures are expected to slash the poverty rate by about a third and reduce the share of children in poverty by more than half, according to estimates from both Columbia University and the Urban Institute.

The provisions would cut the poverty rate among Black Americans by 38%, Hispanic Americans by 43% and White and Asian Americans by around 24%, according to calculations by Christopher Wimer, co-director of the Center on Poverty & Social Policy at Columbia University, and a team of researchers.

"This is one of the biggest, most fundamental changes to anti-poverty policy that we've seen since the 1960s, for sure," Wimer said.

In total, 16 million fewer people will be living in poverty in 2021, according to the Urban Institute, which looked at the impact of the child tax credit, stimulus payments, unemployment benefits extension and food stamps boost.

But there's one big catch. The benefits are all temporary -- a mix of one-time infusions and assistance that lasts no longer than a year.

Already, Biden and Democratic lawmakers are planning a push to make several of the measures, particularly the enhanced child tax credit, permanent. Advocates for the poor are hopeful that they can do so.

"Getting this far is a huge win and a sign of progress in the conversation, as well as immediately putting money in people's pockets," said Elizabeth Lower-Basch, director of the income and work supports team at The Center for Law and Social Policy, a left-leaning group.

"I certainly don't think it's a done deal, but I think there's a lot more opportunity than there has been in the time that I've been working on these issues," she continued.

Here's how the package would fight poverty:

One of the most consequential provisions is the expansion of the child tax credit, which will be in effect for 2021.

The enhanced portion of the credit will be available for single parents with annual incomes up to $75,000 and joint filers making up to $150,000 a year.

The key change is that the tax credit will become fully refundable so that more low-income parents could take advantage of it. Until now, it has only been partially refundable -- leaving 23 million children unable to get the full credit because their families' incomes are too low.

Plus, households could receive the half the credit on a monthly or periodic basis, from July through December, rather than as a lump sum once a year. This is aimed at making it easier for them to cover their expenses. The other half would be claimed on their 2021 tax returns.

By itself, this component could cut child poverty nearly in half, Wimer said.

Another round of stimulus payments

The relief package will also put more money into the pockets of lower-income Americans, as well as some people higher up the income ladder.

Related: How much will your stimulus check be? Use this calculator

This infusion comes on top of the $600 checks approved in December, giving those eligible a total of $2,000 each between the two measures.

The rebates would produce the largest projected reduction in poverty of the four policies examined by the Urban Institute.

Continued help for the unemployed

Those who have lost their jobs will continue to receive federal support through September 6. The relief package extends the $300 weekly boost to unemployment benefits and two key pandemic jobless benefits programs.

The bill also calls for making the first $10,200 of unemployment payments tax-free for households with annual incomes under $150,000.

Freelancers, gig workers, independent contractors and certain people affected by the pandemic can receive benefits through the Pandemic Unemployment Assistance program, while the Pandemic Emergency Unemployment Compensation program increases the duration of payments for those in the traditional state unemployment system.

Food stamp recipients will see a 15% increase in benefits continue through September, instead of having the enhancement expire at the end of June.

This amounts to about $25 more per person per month, or just under $100 per month for a family of four.

A year into the pandemic, hunger remains a pressing problem for many Americans.

Some 22.5 million adults, or 10.5%, said their household sometimes or often didn't have enough to eat in the past seven days, according to the most recent Census Household Pulse Survey, which covers February 17 to March 1.

Among households with children, the figure was 14.4%.

Workers without children will benefit from an enhancement to the earned income tax credit. It's one of the nation's largest anti-poverty programs, but most of the benefits flow to employed families.

The package nearly triples the maximum credit childless workers can receive to $1,502, up from $543.

And it extends eligibility to more people. The minimum age to claim the childless credit will be reduced to 19, from 25, and the upper age limit will be eliminated.

This is the largest expansion to earned income tax credit since 2009.

This story has been updated to note that President Joe Biden has signed the bill.