50 years ago today, the shooting of 4 college students at Kent State changed America 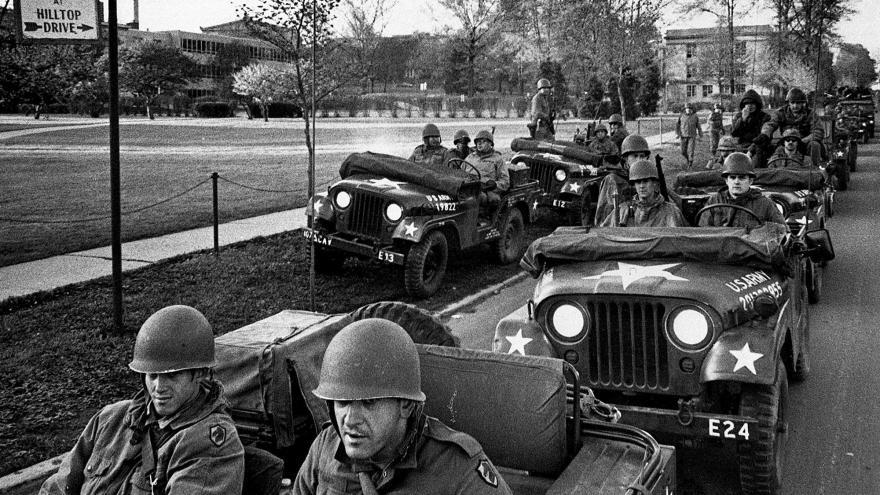 Guardsmen patrol the empty Kent State University campus on May 6, 1970.

(CNN) -- Fifty years ago today, the Ohio National Guard fired on Kent State University students as they protested against the Vietnam War. Four students were killed. Nine were injured.

The incident on May 4, 1970, now known as the Kent State massacre, dramatically changed the nation.

It prompted a nationwide student strike that forced hundreds of colleges and universities to shut down. Life magazine and Newsweek dedicated cover stories to the incident. The New York Times famously showcased the now-iconic photograph of a young woman screaming as she knelt over the body of a Kent State student.

The shootings turned the tide of public opinion against the Vietnam War, and some political officials even argued that it played a role in the downfall of the Nixon administration. Today, the incident symbolizes the political and social divides brought on by the Vietnam War.

Kent State is commemorating the event with a virtual program that includes a candlelight vigil, a radio play, interactive apps that allow users to explore the events surrounding the shooting and video interviews with Kent State students.

When Richard Nixon was elected president of the United States in 1968, it was in part because he had promised to end the war in Vietnam. So when he announced two years later that the US had invaded Cambodia, anti-war activists around the nation soon erupted in protest.

One such protest occurred on May, 1, 1970, on the campus of Kent State University in Kent, Ohio. Students spoke out against the war and buried a copy of the Constitution to symbolize that Congress had not officially declared war, according to an article from the university.

Then in the evening, what started as a peaceful protest in the streets of downtown Kent turned into a violent confrontation between demonstrators and local police. The city's mayor declared a state of emergency, and the massive police force that had been called eventually used tear gas to disperse the crowd.

Fearing further disruptions, the mayor asked Ohio's governor the next day to send the state national guard to Kent. Confrontations between guardsmen and protesters continued on May 2 and May 3, with an ROTC building on campus eventually burning to the ground. It's unclear who was responsible for the fire.

On May 4, students again gathered for another rally to demonstrate both against the war and the presence of the Ohio National Guard on campus, despite an attempt by university leaders to inform the campus that such gatherings were banned. Approximately 3,000 people had gathered in the middle of campus by 11 a.m., according to the university.

Just before noon, the guardsmen ordered the protesters to disperse. When the crowd refused to leave, the guardsmen fired tear gas at students and began following them directly. After several standoffs, the troops headed back to the top of a steep hill, where they turned toward the demonstrators and fired into the crowd for 13 seconds.

Four students were killed, and nine were wounded. The university was immediately closed, and millions of students on campuses across the country protested the incident.