50 years of zombies: Designing the undead to explain the living 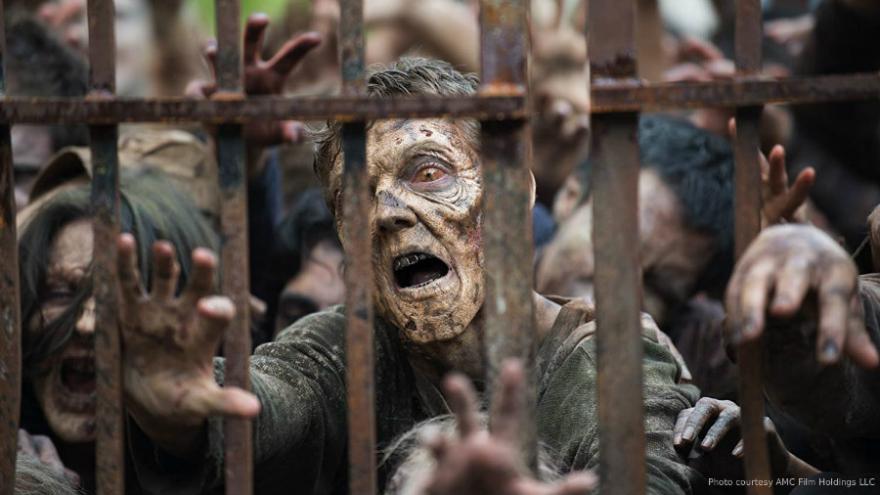 (CNN) -- America, fall 1968. Martin Luther King Jr., dead. Robert F. Kennedy, dead. The Vietnam War raged on, while at home racial and social inequality burned deep. From the Democratic National Convention to the streets of Baltimore, a country staggered towards a presidential election in paroxysms of violence.

On Oct. 1, a month before the vote, an unassuming indie flick called "Night of the Living Dead" premiered in Pittsburgh, Pennsylvania. Horror was never the same again. Directed by George A. Romero on a tiny budget, the movie told the story of an undead apocalypse gripping the US. With its taboo-breaking gore and documentary-like approach, the movie sent the modern zombie lurching into the nation's imagination, terrifying audiences and beguiling them with subtext.

If 1967 was defined by the Summer of Love, 1968 was the morning after the night before.

"There was a good deal of anger that the '60s didn't work," said Romero in 2012, five years before his death. "There was a bit of rage, a bit of disappointment."

"Night of the Living Dead" communicated many of the nation's anxieties -- albeit unintentionally, most agree. Tom Savini and Greg Nicotero, the special effects makeup pioneers and Romero's long-time friends and collaborators, spoke to CNN in separate phone calls. They described "coincidental" color-blind casting and "subliminal choices" that resulted in ubiquitous symbolism and allegory, despite Romero having "no political motivations."

Focusing on a small cast of survivors who barricade themselves in a farmhouse against the zombie onslaught, the group "for better or for worse come to represent what America is," said Gregory Waller, director of cinema and media studies at Indiana University, in a phone interview.

Inside the house, discord reigns as the nuclear family is torn apart. The young couple fly the coop, only to go up in flames. White turns on black; black turns on white. Most poignantly, Romero's young lead, played by African American actor Duane Jones, overcomes the zombies only to be shot dead by white vigilantes before the credits roll. That allegory was topical in 1968. Fifty years on, it still is.

The zombie acted as a catalyst. But at this nascent stage, how best to read it?

"(Romero) took elements of the voodoo zombie genre that began with the RKO Val Lewton movies, mixed in some vampirism and cannibalism, and created a super strain of the undead," director and genre buff Edgar Wright told CNN via email.

In appearance, the zombie was nearly human, with lumbering gait, mouth agape and eyes vacant. The way to destroy them was clear (destroy the brain), as was the way they were created (zombie bite or corpse reanimation after the zombie advent).

There was no precedent, said Nicotero: "(Romero) didn't define the rules. He invented the rules."

But the semiotics of zombies were far from concrete. Romero had created a demon that refused to explain itself and was impossible to reason with. You could never ask a zombie why. It just was. It was this blankness, said Waller, that made the zombie and the genre "remarkably flexible."

In "Night of the Living Dead," Romero dressed his zombies as white-collar workers and housewives in their nighties, suggesting a nation sleepwalking through a disaster. It also showed that aesthetics were vital in constructing a metaphor. The zombie form has since become a palimpsest ready to be overdrawn, and for 50 years the undead have been appropriated by every filmmaker willing to grapple with them.

So what has the zombie ravaged so far -- and where is it staggering to next?

Shortly after "Night of the Living Dead," a slew of low-budget European zombie movies materialized. Few had as much to say. It took Romero himself to dig deeper into the genre, with his 1978 sequel "Dawn of the Dead" posing the question: Do these blank, rapacious faces also reflect something awful about ourselves?

"Dawn of the Dead" took on class and consumerism. Beginning in an urban housing project, it showed how even during a zombie apocalypses, it was the poorest who suffered most acutely. Later, survivors hole up in a shopping mall, where zombies wander aimlessly and humans overindulge alongside them. One character describes the undead as "pure motorized instinct." Another muses that "this place was important in their lives."

"It's like (Romero) had read the stuff that people had written about the first movie," Waller speculated.

Savini oversaw special effects makeup for the sequel, as well as performing stunt work and playing the anarchic biker, Blades. Romero was now using color film stock, and with hundreds of zombies on screen, there was a greater need to differentiate them from humans. So Savini made them gray, a nod to the movie's black and white predecessor.

"That kind of backfired," Savini said -- the crew couldn't create consistent lighting in the mall, turning zombies blue or green, but rarely ever the gray he wanted. Nonetheless, a new aesthetic had been established.

Savini described his time as a US Army combat photographer in Vietnam as "a lesson in anatomy." Gore popped with new clarity as he used prosthetics to mutilate faces and separate flesh from bone. "Nobody ever said art had to be in good taste," Roger Ebert quipped with admiration.

By the time "Day of the Dead" came along in 1985, Romero had turned his creation on Reagan-era politics, dragging mad scientists and army brutes into the mire. The existential threat was something to be conditioned and educated by one camp, annihilated without prejudice by the other. Interestingly, it painted zombies in a sympathetic light, labeling humans as the more dangerous, irrational party.

"Tom really wanted to show that there had been an advance in the decline and decomposition of the zombies," added Nicotero, who was Savini's assistant at the time.

Every zombie now looked individual, a corpse wearing its own backstory. Savini said this angered some fans who expected more of the same after "Dawn." But this new approach helped when shaping the most famous zombie in the Romero cannon: Bub.

Trained by Richard Liberty's modern-day Frankenstein, Bub, played by Howard Sherman, learned to appreciate music, salute his military superior and fire a weapon. He demonstrated that the zombie was not beyond redemption or beyond civility. For that, Bub couldn't be "decrepit in body," because "he's becoming more human" explained Savini. Bub, memorably, realizes his humanity by shooting his oppressor.

Since the original "Dead" trilogy, Romero's grip on the zombie loosened as other filmmakers weighed in. By the early 21st century the undead were running in Danny Boyle's "28 Days Later" (2002) and Zack Snyder's "Dawn of the Dead" remake in 2004 -- much to Romero's chagrin. ("George sold bumper stickers that said 'Fast zombies suck,'" Savini recalled.) At the box office, meanwhile, Romero's "Land...," "Diary..." and "Survival of the Dead" (2005-2009) were running to play catchup.

One title that did win critical approval was "Shaun of the Dead" (2004), Wright's rom-zom-com and self-declared "valentine" to Romero. With its nucleus of late-20s slackers, Wright said the zombie "stand(s) in for the perils of living in your own solipsistic bubble of problems." But "Shaun of the Dead" was one of few films to resemble Romero's claustrophobic "morality plays," as he called them.

An increasingly crowded marketplace has since filled with zombie Nazis, zombie strippers, zombies on a plane and zombies on a train. This popularity has come at a price, argued Waller. With proliferation, the genre's social commentary "gets less and less cogent, to my mind," he said, "just because there are so many versions of this story."

"The dead are everywhere these days," Romero lamented in 2016. "As far as I'm concerned, I'm content to wait until sort zombies die off."

They haven't yet. The hit TV show "The Walking Dead" and spin-off "Fear the Walking Dead," executive produced by Nicotero, have 12 seasons between them so far. For his own sake (and arguably the fans'), Nicotero has ensured that his writers stick to Romero's unofficial guidelines. "I'm very fond of the rules," he said.

"We've never talked about where the zombie apocalypse comes from," he added. "The truth of the matter is: it doesn't matter. It's not about how it started, it's about how the events reshaped the world."

But today of all days, it feels pertinent to ask: Is there any fresh ground left for the undead to cover? After moldering for half a century, the zombie could be forgiven for feeling dead on its feet. Wright admitted to feeling tired of the genre. "I think we should give them a little rest so they can come clawing back in a more surprising way," he suggested.

"We're are now parodying ... the walking dead we have in our society, staring at phones," said Savini. Nicotero also compares zombies and technology, describing a virus-like spread: "Before you know it, it's taken over."

Technology's slow creep into our lives -- and our surrender to it -- feels ominous. If a zombie is known for anything, it's a lack of respect for personal space. So what more fitting a metaphor for the digital age?

At a time when privacy is being eroded, anonymous trolls plague online discourse and silent collectives can be whipped up to destructive ends, we lose something as we pour ourselves out onto the Internet. Too often our likes, our beliefs, our relationships and our common bonds live in cyberspace, not in flesh. The skeptic might argue our identity has been uploaded -- a set of data points to be manipulated and guided through life, directed to consume.

"Maybe there's a little zombie in all of us, eh?" Romero teased back in 1978. Perhaps it's still true. For half a century, they have been a willing metaphor, waiting in the wings. Where the zombie turns next depends entirely on our faults. But rest assured, they will come.

As Wright said: "You can never leave the undead buried for long."