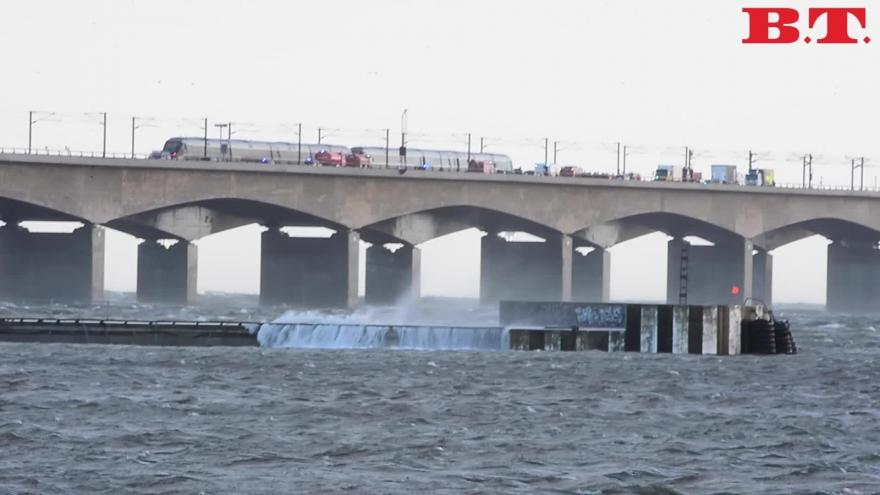 (CNN) -- Six people were killed and 16 injured when a crowded commuter train and a truck trailer that apparently fell from a freight train collided on the Great Belt Bridge in Denmark, authorities said.

The rail accident, which is one of the deadliest in Danish history, took place at about 7:30 a.m. (1:35 am ET) Wednesday in high winds on a bridge linking the islands of Zealand and Funen.

Bo Haaning, of the Danish Accident Investigation Board, confirmed to CNN that the trailer had fallen off the freight train and hit the passenger train, but said it was not yet known whether this caused the accident or happened during it.

The freight train was carrying Carlsberg beer, a spokesman for the brewing company, which has its headquarters in the Danish capital, Copenhagen, told CNN. The train was run by Deutsche Bahn Cargo Scandinavia, said Carlsberg spokesman Kasper Elbjorn.

Passengers have been evacuated but police and rescue teams were still working at the scene.

'There was a lot of confusion, total darkness'

Passenger Jim Nielson, who is from Denmark but lives in Ireland, told CNN he was heading to the airport to catch a flight back after the holidays when the incident occurred.

"I was on the second coach when the crash happened. There was a cargo train coming from Zealand, the opposite direction. It was shaking due to the strong wind," he said.

"One of the containers was blown off the cargo train into the rails, because of the wind. Our driver tried to stop the train, pulling the brake. But the train continued to drive a bit, and crashed into the container blown off from the cargo.

"I saw sparks coming from the wheels. I ducked and bumped my head. Ten seconds later I heard a sudden bang. Then the train came into a halt. There was a lot of confusion, total darkness. Passengers on the first coach took the hardest hit, I believe that's where most of the casualties are."

Nielson spoke from an evacuation center in the city of Nyborg, on Funen, where he was taken with scores of others from the train. "It's a bad way to start the New Year, but I'm glad to be safe," he said.

"We still do not know exactly what happened," he said. "There was a freight train with goods that came off the wagon, and a passenger train then hit it. How it happened we cannot say. What we do now is run an investigation, which is very thorough, and therefore it will take time before we can say exactly what happened."

None of the injuries were life threatening, Bræmhøj said. Police have yet to share the identities of those killed.

Jan Wildau, of Deutsche Bahn Cargo Scandinavia, confirmed that one of its freight trains was involved but was unable to say exactly what happened. "We drive beer daily between Fredericia and the capital," he said. "We have never had anything like this happen before."

No one was injured on the freight train, which had only the driver on board, he said.

'We heard a giant crash'

Heidi Langberg Zumbusch was also on board the train and in the second carriage with her sister and two nieces, aged 11 and 18.

"We had just got on the train in Nyborg, and it felt like we barely made it out before we heard a giant crash, and then all the windows where we were sitting exploded. They exploded in towards us, and we all fell to the floor," she said.

"We were very scared, and also, it was only 7:30 so it was pitch black and dark still. We had no idea how far out over the water we were."

Lamberg Zumbusch said she and her relatives had decided to take the train rather than drive because of the windy conditions. They felt something hit the train and could see beer cases as they were led away by responders, she said.

"They started bringing people out of the first compartment, the first one on the entire train. I could see that some of the wall was torn down and those people who came out were quite beaten up. Of course, that was the compartment where some of them didn't come out," she said.

"We were very, very lucky. We were going to be in that first compartment, but just as we were getting on the train rolled a bit further and we got into the second wagon."

The crossing has now reopened to road traffic in both directions but rail services remain suspended, police said.

Prime Minister Lars Løkke Rasmussen said the accident had "shaken us all" and thanked responders for their efforts.

"Ordinary Danes on their way to work, or going home after the Christmas holiday, have had their lives shattered. It is deeply tragic," he said in a statement. "My thoughts are with the victims of the accident and their families."

Haaning of the Danish Accident Investigation Board declined to comment on whether the high winds were a factor in the crash.

Kim Agersoe Nielsen, technical chief at the company which oversees operations for the bridge, told CNN that wind conditions at the time of the accident were below the level at which the freight train would have been required to lower its speed or stop running.

The 18-kilometer-long fixed link across the Great Belt, as the strait between the islands of Funen and Zealand is known, is a major transportation route for Danes.