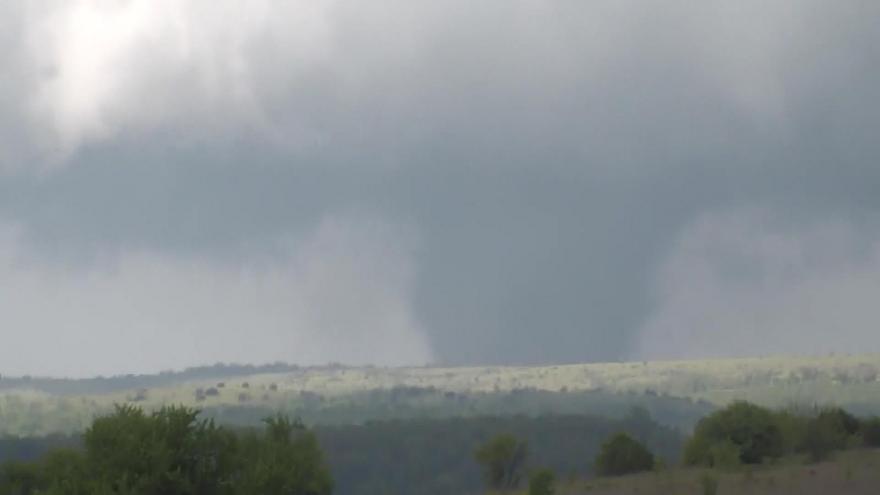 (CNN) -- At least six people were killed Wednesday and more than a dozen injured as severe storms ripped through Southern Oklahoma, Texas and Louisiana, officials said.

Three people died and 20 to 30 people were injured in Onalaska, Texas, the Polk County Office of Emergency Management said in a statement.

Onalaska, in Polk County, is about 90 miles north of Houston. Polk County Judge Sydney Murphy issued a declaration of disaster Wednesday night after the county was hit. The declaration noted there was significant damage to residential structures, commercial structures and public infrastructure.

"We will be sending crews tomorrow morning to survey the path of the Onalaska tornado," the National Weather Service in Houston said on Twitter.

The storms also damaged parts of the Alexandria campus of Louisiana State University.

"All resident students safe. There is damage to DeWitt Livestock building and a camper flipped over. The Oaks and students are ok, but no power on campus," the university tweeted.

A tornado touched down in Marshall County near the state's border with Texas around 5 p.m. local time, said Robert Chaney, director of Marshall County Emergency Management.

Several vehicles were thrown into trees and there was damage to two steel manufacturing companies, Chaney said.

A number of people were hurt, Chaney said, but it's unclear how severe their injuries were.

"There would have been a lot more death," Chaney said, adding the sirens and county system alerted residents of the danger.

The National Weather Service had issued a tornado warning for several southeast Oklahoma counties on Wednesday. A severe thunderstorm capable of producing a tornado and golf ball-sized hail was reported just before 5 p.m. and was moving east at 40 mph, the weather service said.