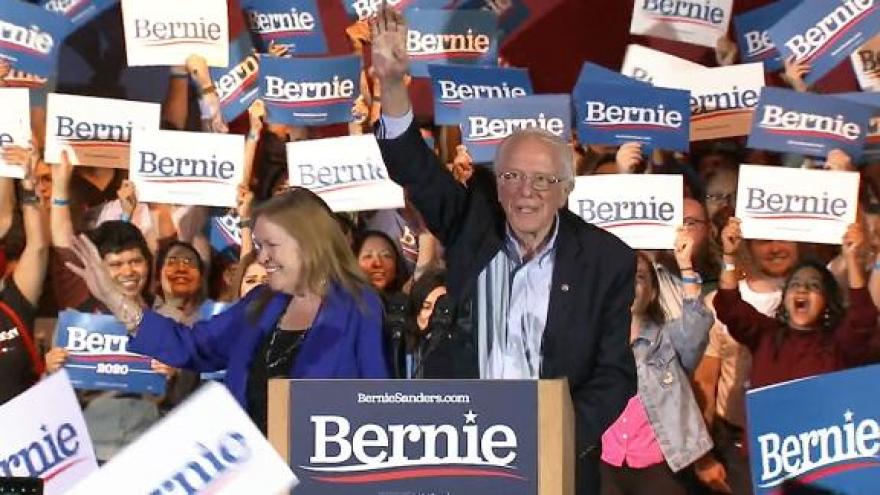 (CNN) -- Bernie Sanders solidified his status as the leading candidate for the Democratic nomination with a commanding win Saturday in Nevada.

Sanders dominated among Latinos and young voters, entrance polls showed. But he was broadly successful across demographic groups -- reaching parity with his rivals among moderate voters.

Still, Sanders is far from clinching the Democratic nomination. A second-place finish in Nevada could prevent Joe Biden's standing from further weakening next week in South Carolina, where the former vice president is hoping his support among black voters will carry his campaign to victory. And former New York City Mayor Michael Bloomberg's $434 million of television advertisements looms large on Super Tuesday, when 14 states vote on March 3.

But Sanders has the largest grassroots army, demonstrated a diverse coalition in Nevada, has more money in his campaign bank account than anyone who isn't a billionaire and has a head start in California and Texas, two Super Tuesday states.

The Vermont senator answered some major questions he faced Saturday. Perhaps most important among them: He won five of the seven casino caucus sites -- revealing that members of the powerful 60,000-member Culinary Union broadly backed him, despite the union leadership opposing Sanders because they favor the special health care plan they'd negotiated over his "Medicare for All" proposal.

Here are six takeaways from the Nevada caucuses:

Sanders gets a win -- and validation -- in Nevada

Nevada gave Sanders more than a clear victory on Saturday -- it delivered a striking validation of his campaign's strategy.

In a state with a Latino population of about 30% and a strong base of organized labor, no one else in the field came close.

The results here suggest that Sanders also is poised for similar successes in Super Tuesday states like California, the primary's crown jewel, and Texas, another delegate-rich state where the Latino vote could be decisive.

Sanders was so confident in a Nevada victory that he left the state to campaign in California on Friday and then spent Saturday hopscotching around Texas, with stops in El Paso and San Antonio. On Sunday, he will hold a rally in Austin.

Next up on the primary calendar, though, is South Carolina, another state where Sanders has shown signs of gaining steam in recent polling. A strong finish in the Palmetto State, where Hillary Clinton blew him out in 2016, could begin to clear the field even before the Super Tuesday states weigh in.

It's still a jumble behind the clear Democratic front-runner, with Biden and former South Bend, Indiana, Mayor Pete Buttigieg jousting for second place as results continue to come in.

In speeches from Las Vegas on Saturday, Biden and Buttigieg previewed new attacks on Sanders.

Biden referenced a report that Sanders had considered a primary challenge to former President Barack Obama. "I promise you, I wasn't talking about running in the Democratic primary against him in 2012," he said.

Buttigieg's entire speech was a contrast with Sanders. "We can prioritize either ideological purity or inclusive victory," he said. "We can either call people names online or we can call them into our movement. We can either tighten a narrow and hardcore base or open the tent to a new, broad, big-hearted American coalition."

But neither speech solved the Sanders opponents' biggest problem: It remains a large, and largely bunched together, field, with Minnesota Sen. Amy Klobuchar also siphoning votes away from the moderate candidates and Bloomberg waiting to make his mark on Super Tuesday. Unless those opposed to Sanders coalesce around a clear alternative -- and quickly -- his march to the Democratic nomination could be impossible to stop.

Biden vows to fight on in South Carolina

Biden claimed Saturday in Las Vegas that he's "alive and we're coming back and we're going to win."

But make no mistake: This is not going well for the former vice president.

He's now finished fourth in Iowa, fifth in New Hampshire and is hoping for a distant second in Nevada. In three runs for the Democratic presidential nomination over 32 years, Biden still has never won a state. One illustration of how far his fall has been: In nearly every poll of Nevada in 2019 and January 2020, Biden was ahead of Sanders.

Unable to consolidate moderate Democratic voters, Biden is likely to struggle with donors, as well, who are split between the former vice president and Buttigieg. He's also being sidelined by Bloomberg's presence in the race.

Biden on Saturday predicted he will win in South Carolina, where a huge advantage with African-American voters has kept him in the lead in polls. Anything short of a clear victory there would almost certainly be a fatal blow to his campaign.

Massachusetts Sen. Elizabeth Warren might have gotten a big bounce out of eviscerating Bloomberg on the debate stage Wednesday night in Las Vegas. Her campaign says it has raised $14 million in recent days, giving her a renewed ability to compete on Super Tuesday.

But that bounce couldn't help her Saturday in Nevada.

About 75,000 early votes -- a vast share of the state's total -- had already been cast, and the early voting window had closed, before the debate had taken place.

Now, the Democratic race moves to South Carolina, where Sanders and Biden have long looked like the strongest contenders, in part because they have stronger support among black voters who make up more than half the Democratic electorate than their rivals. There will be another debate there -- and therefore another opportunity for Warren to take on Bloomberg as a proxy for President Donald Trump in the fall and boost her fundraising again.

But she could be headed into Super Tuesday, the most important day on the Democratic primary calendar, with nothing better than a third-place finish in any of the first four states to vote.

Steyer fails to back up promises

Tom Steyer, after two dismal performances in Iowa and New Hampshire, told his supporters that this race would be won or lost in Nevada -- a state where he spent $15 million on television ads, nearly eight times as much as Bernie Sanders and far more than any other contender.

Steyer did not win. He is likely to finish far behind the likes of Sanders, Biden and Buttigieg.

The billionaire now turns his campaign to South Carolina, a state where he has already invested over $21 million on ads. But, after his behind-the-pack performance in Nevada, Steyer's campaign is limping into what could be his final state.

Steyer's performance could also foretell issues for Bloomberg, the former New York mayor who has spent nearly half a billion dollars on television, digital and radio advertising. Unlike Steyer, though, Bloomberg has also spent millions on staff to build a national operation of well over 2,000 people across the country.

Why do caucuses exist?

Nevada has performed far better than Iowa, where a faulty app, an unprepared state party and confused volunteers plunged the caucuses there into chaos earlier this month. Nevada has not experienced those same issues and CNN was able to project a winner on caucus night.

But the process here in Nevada has been anything but smooth. The biggest issue: Results from Nevada's over 2,000 precincts took hours to come out.

Sanders' advisers fought to keep caucuses as part of the nomination process after the 2016 election, and that strategy has largely paid off for the Vermont senator.

But slow results have stifled possible momentum for other candidates who performed well in Iowa and Nevada and allowed candidates like Klobuchar, who performed poorly in Nevada, to claim, "As usual, I think we have exceeded expectations."

Even more critically, issues around caucuses have called into question the credibility of the nomination process, allowing Republicans to attack Democrats for the caucus mishaps.