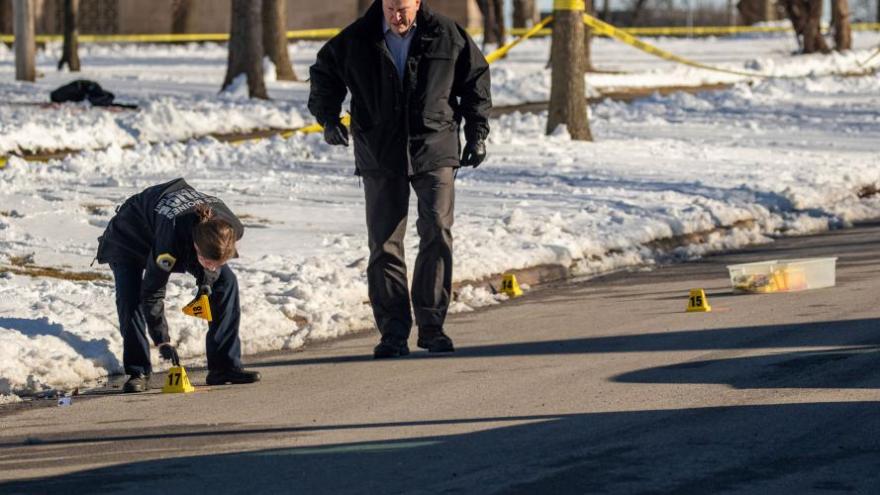 Multiple agencies are helping with the investigation into the shooting outside East High School in Des Moines.

(CNN) -- Six teenagers were arrested and charged with murder following a drive-by shooting outside a high school in Des Moines, Iowa, that left one teenager dead and two others in the hospital, police said Tuesday.

The shooting took place Monday on the grounds of East High School, though not within the school building. Gunshots were fired by multiple shooters from multiple vehicles, police said.

A 15-year-old boy who did not attend the school was killed, and police said he was the intended target of the shooting. Two female students also were shot and remain hospitalized -- a 16-year-old in serious condition and an 18-year-old in critical condition, according to police.

The incident is at least the 13th shooting at an American campus with K-12 students in 2022, according to a CNN tally.

After the shooting, Des Moines police detectives carried out five residential search warrants and six vehicle search warrants and recovered six firearms, police said in a news release. Six Des Moines residents between the ages of 14 and 17 have been charged with one count of murder and two counts of attempted murder, according to police.

Police said they started receiving multiple calls reporting gunfire at the school at 2:48 p.m. and found the three victims outside when they arrived. All three were rushed to hospitals.

"While this incident occurred outside of a school, it could have occurred in any one of our neighborhoods," Des Moines police said on Facebook. "The school is where the suspects found their target. The rapid response by DMPD officers, and the swift action by the school staff placing the building in lockdown and sheltering students and staff in place, certainly had a positive impact on safety and scene management."

East High School Student Kaylie Shannon told CNN affiliate KCCI that she was in a car outside the school when she heard shots.

"I was just sitting in my friend's car and then all of the sudden I heard 11 gunshots and some boys screaming," Shannon said.

The school went under lockdown for more than 40 minutes, but students were dismissed around 3:30 p.m. when police gave an all clear, according to a statement from Des Moines Public Schools.

Sgt. Paul Parizek called the incident "a punch in the gut," KCCI reported. "The kids in that school are our community's most precious cargo," he said.

"I think we can all agree an event like this is everyone's worst nightmare. Tonight, hug your students and love them," Principal Jill Versteeg said in the statement.

Shootings in and near schools have become too common, Superintendent Thomas Ahart said.

"Our staff and students are forced to train for these incidents and the trauma associated with the repeated drills and incidents will remain with them for years to come. It's unfortunate that our state and our country have become a place where firearms are far too easily accessible. We remain committed to protecting our students and staff, but real change to gun laws and access would go a long way to help us," Ahart said in the statement.

The Bureau of Alcohol, Tobacco, Firearms and Explosives (ATF) of Kansas City went to the scene to assist in the investigation, the agency tweeted.

Other agencies assisting with the investigation include the Iowa State Patrol, Polk County Sheriff's Office, the FBI and the Des Moines Public Schools Department of Public Safety.