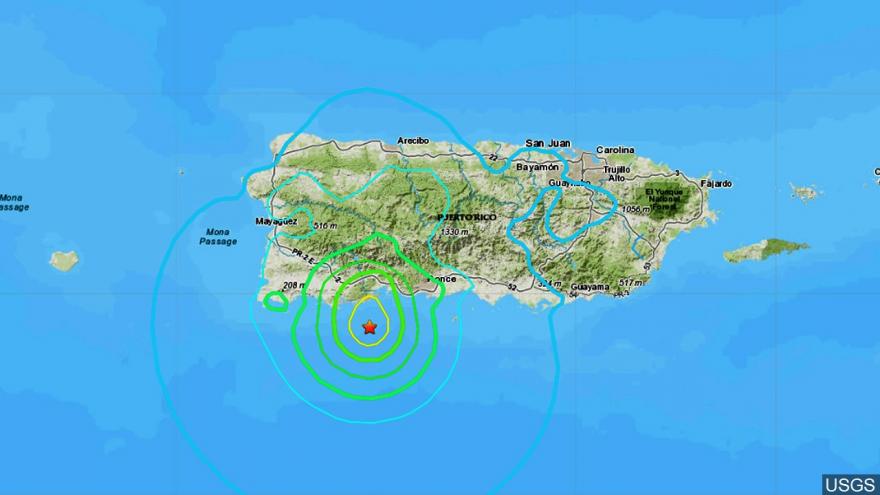 (CNN) -- A 6.4-magnitude earthquake rocked Puerto Rico early Tuesday morning, just one day after a 5.8 magnitude quake shook the island, according to the US Geological Survey.

The 6.4 quake struck at 3:24 a.m. local time about 6 miles south of Indios, Puerto Rico, the USGS said. The mayor of Guayanilla, just north of Indios, reported damage to homes and a church. There were no immediate reports of injuries, Mayor Nelson Torres said in a phone interview with CNN affiliate WAPA.

Puerto Rico Governor Wanda Vazquez Garced urged citizens to remain calm as the government responds to the most recent quake in a statement posted on Twitter.

"I hope all are well. We are getting our information from @NMEADpr and @DSPnoticias," the tweet said. "The entire government is active and in action. I ask our people to remain calm and urge you to remain safe."

No tsunami is expected following the earthquake, the US National Tsunami Warning Center said.

The quake's magnitude was adjusted slightly downward in the hours after it struck, after initially being recorded as a 6.6.

Puerto Rico has experienced a flurry of earthquakes since December 28, according to data from the USGS, ranging in magnitude from 4.7 to Sunday's 5.8.

All of the earthquakes appear to have been foreshocks to the most recent quake, CNN Meteorologist Pedram Javaheri said.

On Monday, the early morning quake in the same area caused some damage, including rock slides and a home collapse in Guayanilla, Puerto Rico, Director of Emergency Management Carlos Acevedo said.