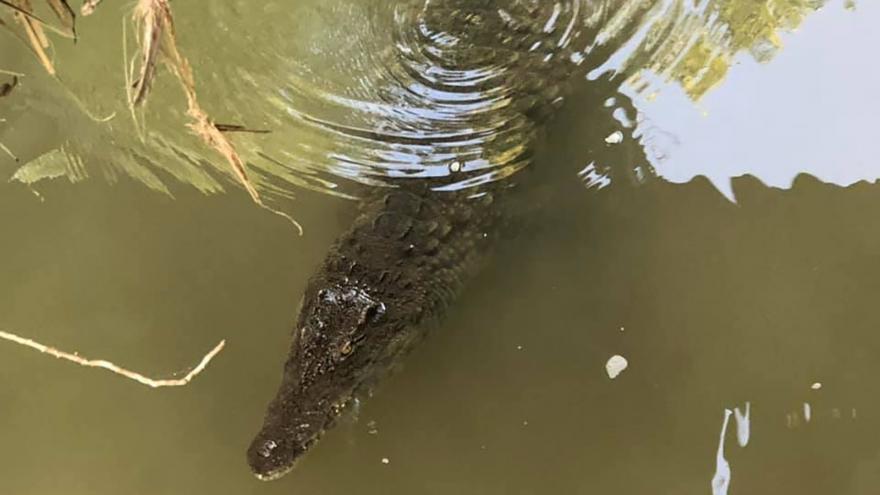 Officials think the crocodile was probably somebody\'s pet, but they did not find a microchip ID. Source: Rich Dennis
By David Williams, CNN

(CNN) -- It sounds like a scene from a monster movie.

Children from a church group were playing in a creek in West Alexandria, Ohio, on Wednesday evening when one of their leaders spotted a 7-foot-long crocodile swimming nearby.

There were 16 kids -- all first- through sixth-graders -- playing in Bantas Fork Creek, and adults were in the water and on a small bridge to keep an eye on them, according to Rick Turnbull, who helps teach the children.

Another adult "saw something in the water, a shadowy object moving, and he yelled down to the person on that side of the bridge and shouted 'get the kids out of the water,' " Turnbull said.

Rich Denius was in the water with one of his sons and helped get the children to safety.

"Give Jesus all the glory for protecting these kids," Denius said.

The crocodile was about 20 feet away by the time everyone got out of the creek. Turnbull said it swam right under the bridge they were standing on.

"He wasn't afraid of us. He swam under it, popped his head up and looked at us," he said.

A wildlife officer was called in and shot the animal. Turnbull said the kids had been taken out of the area before that happened.

It was probably a pet

Crocodiles are not native to Ohio, and the state's veterinarian said it was probably a pet that someone dumped when it got too big.

"This was the first sighting, so he probably hadn't been in there very long," Dr. Tony Forshey said.

The crocodile was 7½ feet long and weighed 171 pounds, he said.

Forshey said officials scanned the animal for a microchip ID but didn't find one, and there weren't any signs of other crocodiles in the area.

It's an unforgettable lesson

Turnbull said the church group takes the children down to the creek a couple of times each summer, when the water's warm, to study nature as part of their religious lessons.

On Wednesday, they discussed how some fish will gather together near a light source to protect themselves from predators.

"It was wild that we'd had a lesson about predators lurking in the shadows," he said.

West Alexandria is about 20 miles west of Dayton, so they also talked about the need to be aware of their surroundings -- especially after last week's shooting in a popular Dayton nightlife district.

Turnbull also stressed the importance of obeying people in authority, which really paid off because when the time came, the children climbed out of the creek without complaint.

"It's a lesson that these kids will never forget," he said.