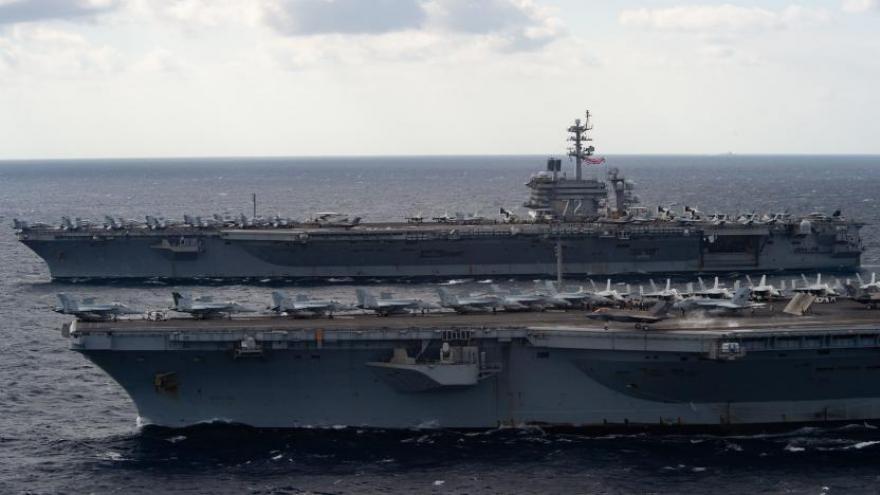 The pilot of a US F-35 jet ejected as his jet crashed on the deck of the USS Carl Vinson aircraft carrier in the South China Sea injuring seven, the US Pacific Fleet said in a statement Monday.

(CNN) -- The pilot of a US F-35 jet ejected as his jet crashed on the deck of the USS Carl Vinson aircraft carrier in the South China Sea, injuring seven, the US Pacific Fleet said in a statement Monday.

The pilot was conducting routine flight operations when the crash happened. They safely ejected and were recovered by a military helicopter, Pacific Fleet said. The pilot is in stable condition.

Six others were injured on the deck of the carrier. Three required evacuation to a medical facility in Manila, Philippines, where they are in stable condition, according to Pacific Fleet. The other three sailors were treated on the carrier and have been released.

The cause of what the statement called a "inflight mishap" is under investigation.

The crash is the first for an F-35C, the US Navy's variant of the single-engine stealth fighter, designed for operations off aircraft carriers.

The F-35A, flown by the Air Force, takes off and lands on conventional runways, and the F-35B, the Marine Corps version, is a short-takeoff vertical landing aircraft that can operate off the Navy's amphibious assault ships.

Versions of the F-35 are also flown by US allies and partners, including Japan, South Korea, the United Kingdom, Australia, Italy, Norway, the Netherlands and Israel. More countries have orders in for the jet.

The US Navy variant "features more robust landing gear to handle carrier takeoffs and landings, folding wings to fit on a crowded flight deck, larger wings, a slightly larger payload, and a slightly longer operating range," according to the aircraft's manufacturer, Lockheed Martin.

The F-35C was the last of the three variants to become operational, doing so in only 2019.

Carl Vinson was the first of the US Navy's 11 aircraft carriers to deploy with the F-35C when it left San Diego last August.

"This deployment marks the first time in U.S. naval aviation history that a stealth strike fighter has been deployed operationally on an aircraft carrier," Lockheed Martin said.

The addition of the F-35C to Carrier Air Wing 2 aboard Carl Vinson for its current deployment marks the first time a US carrier has flown with what the Navy calls its "air wing of the future," which also includes F/A-18E/F fighters, EA-18G electronic warfare aircraft, E-2D airborne early warning aircraft and CMV-22 tilt-rotor transports.

Monday's crash in the South China Sea was the second of an F-35 this year.

On January 4, the pilot of a South Korean F-35 made an emergency "belly landing" at an air base on Tuesday after its landing gear malfunctioned due to electronic issues, according to the South Korean Air Force.

In previous years, F-35s have been involved in at least eight other incidents, according to records kept by the crowdsourced website F-16.net.

In May 2020, the pilot ejected safely when a US Air Force F-35 crashed on landing at Eglin Air Force Base in Florida. The Air Force attributed the crash to a variety of factors involving the pilot and the plane's systems.

In April 2019, a Japanese F-35 crashed into the Pacific Ocean off northern Japan, killing its pilot. The Japanese military blamed that crash on spatial disorientation, "a situation in which a pilot cannot sense correctly the position, attitude, altitude, or the motion of an airplane," according to the journal Military Medicine.

When the latest crash occurred, Carl Vinson and its escorts were operating in the South China Sea along with the USS Abraham Lincoln Strike Group in dual-carrier operations that began on Sunday, according to Navy social media accounts.

The 1.3 million-square-mile South China Sea has been the site of frequent naval activity in the past several years as China has asserted its claims over almost all of the area by building up and militarizing islands and reefs.

The US military asserts its right to operate freely in what are international waters. Carrier deployments like the current one exercise those rights.

The two strike groups along with a Japanese helicopter destroyer staged a large exercise on Saturday in the Philippine Sea, the part of the Pacific Ocean between Taiwan and the US island territories of Guam and the Northern Mariana Islands.

A day after that exercise, China sent 39 warplanes into Taiwan's self-declared air defense identification zone, the largest such incursion of Chinese warplanes into that zone this year.