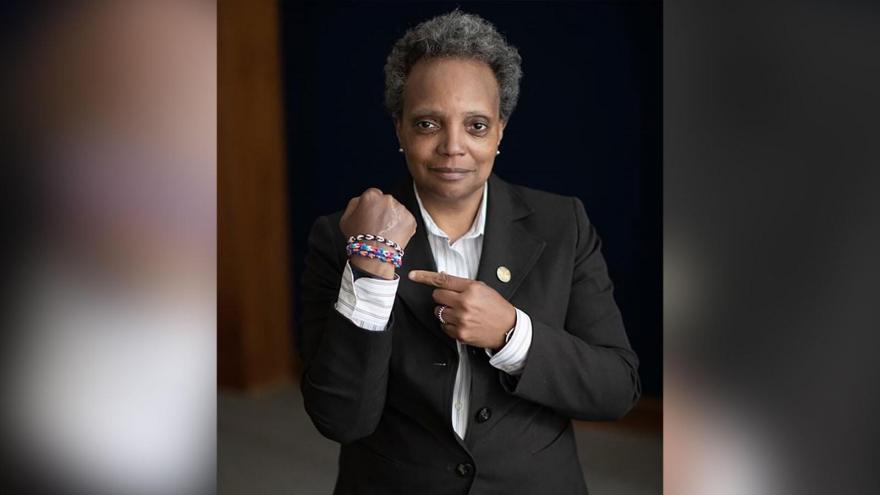 The Chicago second grader began the project with an apparent knack for entrepreneurship -- she sold the most cookies in her Girl Scout troop last year -- and a desire to spread kindness in response to bullies who made fun of her height.

"When I was 3 years old, I got bullied for being the shortest kid in the class, and my mom wrote a book about it, and it was my moment I knew I wanted to spread kindness everywhere," Hayley said.

When asked whether she understands what a significant financial contribution she's made to her hometown hospital, she smiled.

"It's definitely more than the tooth fairy gives!" she said.

Hayley has now sold bracelets to customers as far as Italy, as well as to Chicago Mayor Lori Lightfoot, the Chicago White Sox and Miguel Cervantes, who played the lead role in Chicago's production of "Hamilton."

Hayley's bracelet making has become a community effort. She says she's gotten her friends involved, teaching bracelet making at her summer camp, and later to friends over Facetime and Zoom.

"Every day the campers had the choice to help Hayley make bracelets, and she would come home with hundreds. It was really helpful to us," said Lori Orlinsky.

Added Hayley: "Yeah, because that's when we were really in a tight squeeze."

Hayley chose to donate to the Lurie Children's hospital, having spent time in their intensive care unit at birth. She wanted to give back after hearing that health care workers were running low on PPE.

"$20,000 is a pretty incredible amount to raise, especially for a 7-year-old," said Tracey McCusker, an associate director for the hospital's foundation. "This kind of fundraising effort allows the hospital to use the money for a variety of different things. It was definitely needed at a time, when we really needed to respond rapidly to Covid-19."

McCusker says the money has been used for PPE, but it has also helped fund the hospital's telehealth services, development of a diagnostic test and Covid-19 research. Additionally, McCusker says the hospital has used some of the money to provide low-income communities with PPE and safety information they need to help combat the virus.

"Her support is helping, of course, inside of our hospital, but I would certainly (say) in our greater community as well," McCusker said.

Hayley says she wants to keep making bracelets until the pandemic is over, and she is already planning special designs for the holidays. As her donations near the $21,000 mark, her mom says she's most proud of her daughter for being a uniting force during divided times.

"It was just a time when the world was at odds with each other and we had people from all walks of life donate," Orlinsky said. "This is proof that in really trying times we can all come together under a little girl with a beautiful mission."