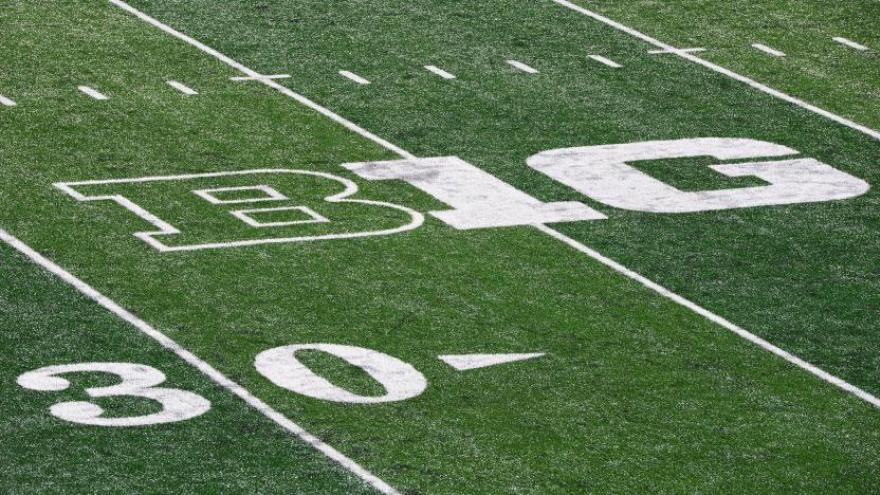 Eight players from the University of Nebraska football team are suing the Big Ten Conference, requesting an order to invalidate the Big Ten's decision to not play football this fall. In this image, the Big Ten logo is displayed on the field on November 12, 2016, at Memorial Stadium in Bloomington, Indiana.

(CNN) -- Eight players from the University of Nebraska football team are suing the Big Ten Conference, requesting an order to invalidate the Big Ten's decision to not play football this fall.

The 13-page lawsuit was filed Thursday in Lancaster County District Court in Nebraska.

The plaintiffs in the suit are Nebraska football players Garrett Snodgrass, Garrett Nelson, Ethan Piper, Noa Pola Gates, Alante Brown, Brant Banks, Brig Banks and Jackson Hannah. They are seeking damages of less than $75,000 and for the fall season to be restored, the lawsuit says.

While Big Ten Commissioner Kevin Warren has previously said that the vote by the Big Ten Council of Presidents and Chancellors was "overwhelmingly in support of postponing fall sports and will not be revisited," the lawsuit says that the council did not vote on whether to cancel the fall football season. The lawsuit references University of Minnesota President Joan Gabel and Michigan State University President Samuel Stanley, Jr. as being quoted that the council did not vote on the decision to cancel or postpone the 2020 fall football season.

The lawsuit says this is "a case in which a powerful collegiate athletic conference contends that its student athletes have no rights."

"Even though its decision significantly and directly affects the rights and opportunities of student athletes at its member institutions, the Big Ten has rejected calls for transparency and refuses to provide documents supporting its claim that a vote was taken or that a proper process was followed," the lawsuit states. "As a result of the failure of process, the Student Athlete Plaintiffs have been irreparably harmed."

CNN has reached out to the Big Ten for comment on the lawsuit.

The conference announced August 11 that it was postponing the 2020-21 fall sports season -- just six days after it had released a football schedule -- because of the Covid-19 pandemic.

Warren said that day that for his conference, "it became abundantly clear that there was too much uncertainty regarding potential medical risks to allow our student-athletes to compete this fall."

On August 19, Warren said in an open letter that the Big Ten created a Return to Competition Task Force to plan for the return of fall sports competition as soon as possible.

"In evaluating winter/spring models, we will explore many factors including the number of football games that can reasonably be played from a health perspective in a full calendar year while maintaining a premier competitive experience for our student-athletes culminating in a Big Ten Championship," Warren said in the letter.