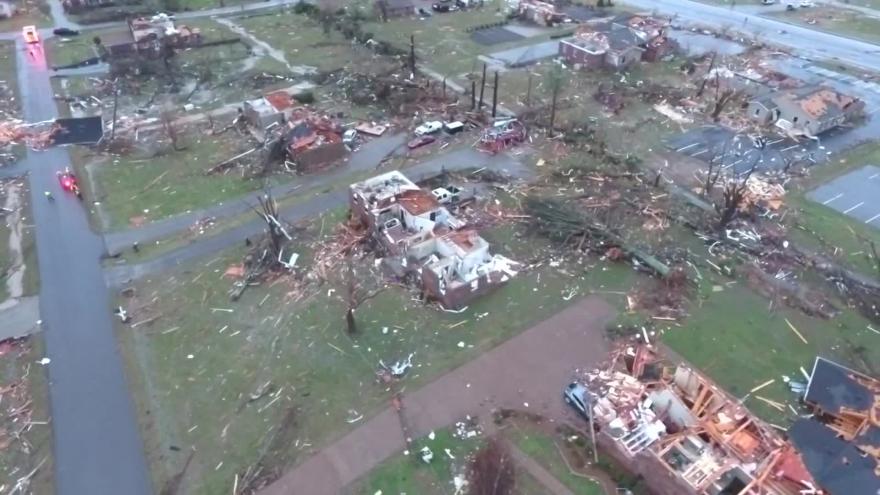 Gov. Bill Lee said at a press conference earlier Tuesday morning at least nine people have died in Tennessee as a result of overnight tornadoes that struck throughout the state.

Just filmed a #tornado pass north of my building and just north of the state capital! Wow! pic.twitter.com/HUd40rvdsD

Deaths were reported in Benton, Davidson, Putnam, and Wilson counties. Two people were confirmed dead in Wilson County along with a third person who died as a result of a medical issue. Four people died in Putnam County. One death was reported in Benton.

Two people were reported dead in East Nashville, according to Metro Police.

"Last night was a reminder about how fragile life is," Nashville Mayor John Cooper said at a Tuesday morning news conference.

Lee said only essential state employees should report to work on Tuesday because of the weather. He said don’t travel into Nashville if you don’t have to.

Lee said he spoke with The White House this morning. He said The White House asked what they can do. The state is still assessing damage and will apply for federal help once assessed.

Two shelters have been opened in Nashville at East Magnet High School in East Nashville and at Centennial Sportsplex.

In Nashville, 30 fire department personnel were injured while responding to calls on Tuesday morning, according to Nashville Fire Department Chief William Swann.

The most heavily damaged areas include Germantown, East Nashville, Donelson, and Hermitage.

In Nashville, Bridgestone Arena will open at 11 a.m. to provide meals for those impacted by the tornadoes.

Putnam County officials later said at least three people have died from the storm and then a short time later, Benton County authorities confirmed another person was killed inside a mobile home that overturned on Ballard Rd. At least 25 homes in Benton County have been damaged and three or four of the homes are total losses.

Another person was reported dead around 6:24 a.m., but the Tennessee Emergency Management Agency (TEMA), did not know where the person died.

Highway 70 west of Cookeville Charleton Square Plunk Whitson Echo Valley Prosperity Point N. Mcbroom Chapel Double Springs Utility District The area south of Buffalo Valley and north of Peach Orchard appears to be okay. Power is out in the areas and authorities are going house to house on foot to check on everyone in the affected areas. Residents are asked to keep the roadways free while authorities render first aid, find missing people and work to clear roads.

As the storm moved through the western counties of Middle Tennessee into the Metro Nashville area, NWS spotter and viewer reports of a possible storm began coming in.