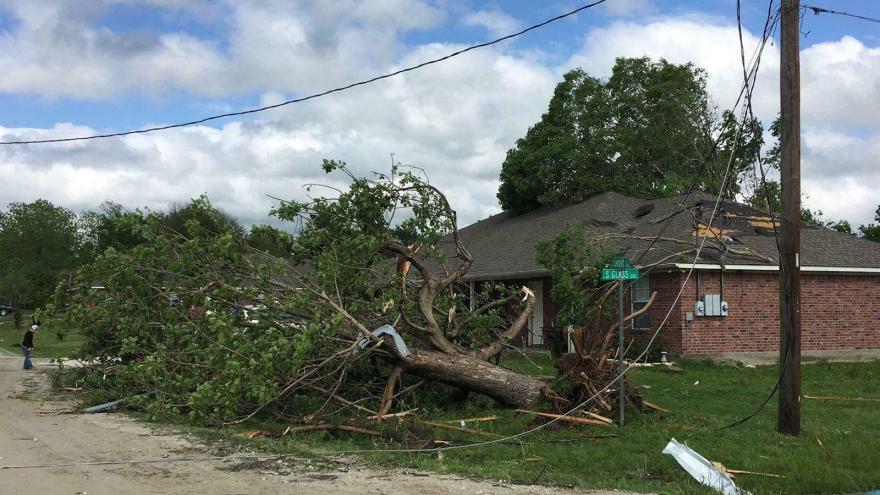 (CNN) -- Storms that killed at least two people in Texas and one in Louisiana crossed the Mississippi/Alabama state line early Sunday, moving the risk of life-threatening winds, strong tornadoes and large hail to a large section of the United States.

By Sunday, the number had gone down to 80 million.

"All accompany this system that is marching eastward. New York, Washington DC and Atlanta all within the zone. Greatest risk near Ohio River Valley and S. Appalachia," CNN Meteorologist Derek Van Dam.

Tornadoes embedded in the storms pose a significant risk overnight since they are difficult to see and people are less likely to receive warnings while they're asleep, Van Dam said.

One thunderstorm cell near Columbus Air Force Base in Mississippi has a potential "debris ball" signature on radar, which indicates the potential for significant tornado damage that can be detected by radar, he said.

The Storm Prediction Center has issued an enhanced risk (level 3 out of 5) stretching from eastern Alabama through the southern Appalachians and into the Ohio Valley.

The main line of storms will begin to push into this area late Sunday morning and trek to the east in the afternoon. The center said it expects the threat of severe weather to increase throughout the day.

"Potential for widespread severe thunderstorms Sunday across much of the Eastern US. Damaging winds are expected to be the primary threat, but a few tornadoes are also possible. Some storms may also produce large hail or torrential downpours resulting in localized flash flooding," the National Weather Service tweeted.

Texas experienced the beginning of the dangerous and severe storms Saturday.

Two children, ages 3 and 8, were killed when a tree fell on their car as storms hammered east Texas. They were in the back seat with their parents in the front, said Angelina County Sheriff's Department Capt. Alton Lenderman. The children were pronounced dead at the scene.

A preliminary damage survey found that a tornado with peak intensity of EF-3 and winds up to 140 mph touched down in Robertson County, according to the National Weather Service in Fort Worth.

There were reports of multiple injuries in the Robertson County town of Franklin, the NWS said, and CNN affiliate KWTX reported widespread damage there. Trees were pulled up by the roots, roofs torn off buildings and the cinder block foundation was all that was left of a mobile home in the town, which is southeast of Waco.

The entire town of Franklin and neighboring Bremond lost electricity, with 3,088 customers cut-off across the county early Sunday.

To the north, dime-sized hail pounded the Dallas-Fort Worth area.

Meantime a 13-year-old boy drowned in a drainage area in West Monroe, Louisiana, late Saturday afternoon, according to the Ouachita Parish Sheriff's Office.

4 tornado safety tips that could save your life

CNN meteorologist Chad Myers said the warm air present during Saturday afternoon enhanced the atmosphere's instability, creating more energy for storms to tap into and aiding in their development.

He said the threat for severe weather is greatest at such times but that the risk remained even after warm temperatures dropped.

"The storm is so vigorous that tornadoes are still possible after dark," Myers said.

The Mississippi Emergency Management Agency warned of a confirmed tornado around Saturday night.

"A confirmed large and extremely dangerous tornado was located near Longview, or near Starkville, moving northeast at 35 mph. This is a particularly dangerous situation. Take cover now!" it tweeted.

There were multiple confirmed fatalities and multiple injuries in Monroe County from severe weather overnight, the Mississippi Emergency Management Agency said without providing any additional details.

Police in Monroe County earlier described the destruction from the storm Saturday evening.

"It looks like a storm came up through Louisiana and into Mississippi and exploded in Monroe County," Monroe County Sheriff Cecil Cantrell told CNN.

"We were hit really, really, hard. We have a lot of flooding, there are several trees down. We are just a mess," Cantrell said.

"Central Alabama, don't let your guard down as you head off to bed. Severe thunderstorms that have produced damaging tornadoes in central MS will begin moving into our state in the next couple hours. Get those weather radios and phone apps TURNED ON," its Birmingham office said.

Georgia's Augusta National Golf Club is included in the slight risk area Sunday as the Masters golf tournament concludes. Tournament organizers have moved up tee times for Sunday because of the storm threat.

The storms are expected to move through the Augusta area during the afternoon and evening.

The tornado threat will be lower by then, but damaging winds could still present hazardous conditions.

Correction: This story has been updated to clarify the number of people who will be affected by the storm Sunday.