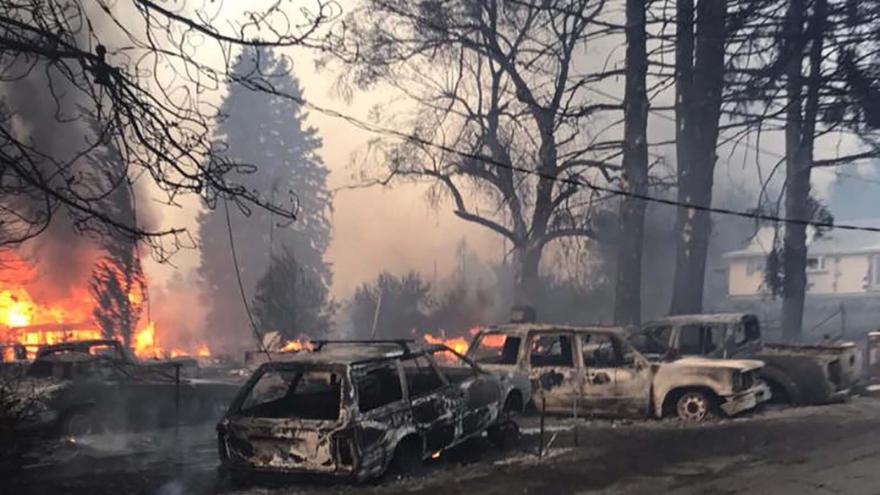 A fire destroyed 80% of Malden, Washington as the Whitman County Sheriff's Office, which posted this photo, reported.

(CNN) -- A small town in eastern Washington is in ruins after a fast-moving wildfire swept through Monday, and teams are still working to account for all residents, county officials said.

About 80% of the homes and buildings in Malden, about 35 miles south of Spokane, have been completely destroyed, including the fire station, post office, city hall and library, the Whitman County Sheriff's Office said in a news release.

Homes in nearby Pine City were also damaged or destroyed, according to the sheriff's office.

"The scale of this disaster really can't be expressed in words," Whitman County Sheriff Brett Myers said in a statement. "The fire will be extinguished but a community has been changed for a lifetime. I just hope we don't find the fire took more than homes and buildings. I pray everyone got out in time."

More than 75 large wildfires are burning across the United States, according to the National Interagency Fire Center. California has been hit hardest, with entire communities there ordered Monday to evacuate.

In eastern Washington, fires fueled by high winds and dry ground spread quickly Monday, engulfing structures and damaging property as nearly every fire district in the county responded. Just after noon, another fire moved in, and deputies went door to door to evacuate residents, according to the news release.

Whitman County Emergency Management, the sheriff's office and Fire Incident Command are working on a plan to take inventory of the damage and account for residents who were in their homes or in the communities when the firestorm hit.