9,000 NYC workers on unpaid leave for not complying with vaccine requirement. 91% did get at least one dose 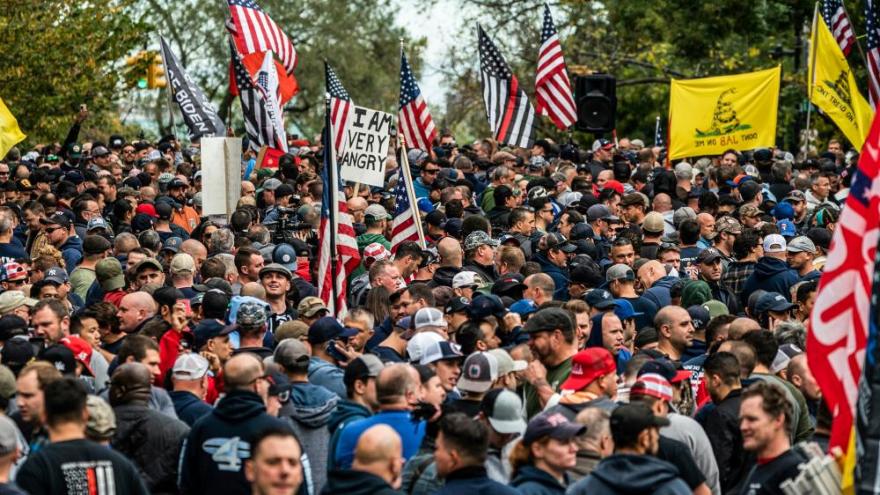 NYC mayor vows consequences for firefighters if they skipped work to protest vaccine mandate after 2,300 called out sick.

(CNN) -- About 9,000 of New York City's 378,000 municipal employees were on leave without pay as of Monday because they haven't complied with a Covid-19 vaccine mandate for city workers, the mayor said Monday.

Members of the fire and police departments and other city workers had until 5 p.m. Friday to show proof they have received at least one vaccine dose or request an exemption; otherwise, they would be placed on unpaid leave. The same mandate was already in effect for city health care and education workers.

About 91% of the city's employees have received at least one dose, including large percentages of first responders, Mayor Bill de Blasio said Monday.

The number of city employees on leave appears to be less than 3% of the municipal workforce. About 12,000 other employees, meanwhile, have applied for a religious or medical exemption, and the city will decide those cases in coming days, De Blasio said.

De Blasio said Monday the mandate has not resulted in service interruptions for the city police, fire and sanitation departments. However, hundreds of firefighters called in sick Monday as the vaccine mandate went into effect -- and the city's fire commissioner said he believed many called in sick to protest the mandate.

As for city police, the NYPD has an 84% vaccination rate, up from 70% when the citywide vaccine mandate was announced October 20, de Blasio said.

NYPD Commissioner Dermot Shea said the department's vaccination percentage was 85%, with the vast majority of the remaining unvaccinated requesting accommodations for religious or medical reasons.

About 2,300 city firefighters have called in sick since the vaccine mandate went into effect, fire Commissioner Daniel A. Nigro said at a news conference Monday.

Nigro said he believed many people calling in sick were protesting the vaccine mandate.

De Blasio said Monday that any firefighters feigning illness to protest the vaccine mandate are "doing an immense disservice" to the city,.

"The folks who are out sick and really aren't sick -- the folks who are faking it -- are doing an immense disservice to the people of this city and to their fellow members of service," de Blasio said during an interview on Spectrum NY1, adding, "We will make sure there are consequences for that."

The FDNY-Firefighters Association, which opposes the mandate, suggested firefighters could be taking sick leave due to reactions to receiving the vaccine over the weekend.

But the mayor said the city was looking into whether the firefighters' union had coordinated any "sick-out."

"If the union coordinates -- in any way -- a job action, that is a violation of the Taylor Law," de Blasio said, referencing a New York state law that prohibits public employees from striking.

The mayor said the city was willing to "go to court immediately" over any alleged Taylor Law violation.

"There's a certain point where responsible, decent people who say they believe in American values need to recognize there's been due process, democracy has happened," de Blasio said of the mandates. "The people spoke."

"There's a lot of members of the fire department -- there's a lot of redundancy," he said, adding that scheduled training and maintenance was canceled Monday in order to maximize the number of on-duty firefighters. "Response time has been very strong."

Nigro, the FDNY commissioner, said at a news conference earlier Monday that 18 fire units were out of service out of 350, though no firehouses had closed.

"Once the members come to their senses and stop using medical leave improperly, they can help out not only the citizens of the city but their brothers and sisters who are staffing these units," Nigro added.

Union is 'not anti-vaccine,' leader says

According to city figures Monday morning, 77% of FDNY firefighters had received a vaccine, up from 58% when the vaccine mandate was announced on October 20. Emergency Management Services employees within the FDNY have an 88% vaccination rate, up from 61%.

FDNY-Firefighters Association President Andrew Ansbro said Monday morning that he didn't know how many firefighters would not be permitted to work due to still being unvaccinated, stating the FDNY does not share those numbers with them.

"I don't have access to numbers of who's gone sick, but I do know that hundreds of firefighters have received their Covid vaccination in the last several days. No one should be expected to work less than 100%. Everyone knows the vaccine causes mild flu-like symptoms regularly, so these members are not coming to work feeling those symptoms," Ansbro said.

He said the vaccine mandate is "causing an exodus" of firefighters from the department and the remaining firefighters are "going to have to work to the breaking point" to make up for the staffing shortages. Ansbro maintained the union is "not anti-vaccine, we are anti-mandate."

FDNY-Fire Officers Association President Jim McCarthy said Monday morning "all we are asking for is extra time" regarding the city mandate, so their members can have more time to make decisions on whether to get the vaccine, to file any religious or medical exemptions, or potentially decide to retire.