9 dead after gunmen open fire at Coptic church near Cairo 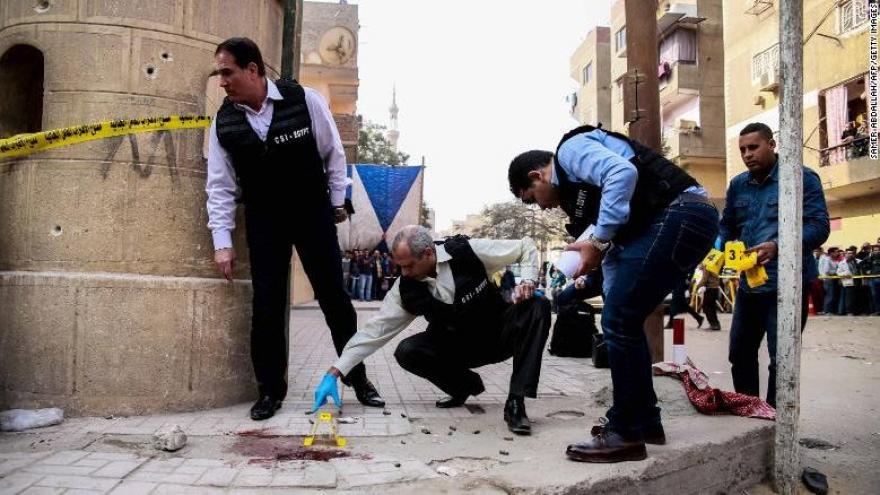 (CNN) -- Nine people were killed Friday after gunmen opened fire at a church near Cairo, officials said, the latest in a string of attacks on minority Coptic Christians in the country this year.

The Ministry of the Interior said on its Facebook page that the suspected attacker was 33-year-old Ibrahim Ismail Ismail Moustafa, and he was known to have participated in five different attacks between 2016 and 2017. The ministry's statement called the suspect "a well-known terrorist who participated before in attacks on police men and civilians."

Witnesses told CNN that people were gunned down outside the church on their way out after a service. A CNN reporter at the scene saw bullet holes and broken glass in the church's facade, and pools of blood on the ground.

The assault was carried out at the St. Mina Coptic Church in Helwan, a district on the southern outskirts of the Egyptian capital. A witness told CNN that he saw two attackers, but officials have given conflicting accounts of how many people were involved.

Father Aghathon Riad told CNN that about 10 minutes after Mass ended, the sound of shots rang out.

"I went downstairs to check what was happening," he said. "I instructed the people in the ground floor to go upstairs. I took some of them to my office."

Police guards exchanged fire with the attackers, delaying their approach to the door, he said.

Bullets shattered glass, but no one inside the church was hurt, Riad said.

One suspected assailant was arrested with a machine gun, ammunition and a bomb that he had planned to use in the church, the Interior Ministry told state media.

Among the nine killed were eight Christians and a police officer, who was Muslim. Five others were wounded, including two in critical condition, the Health Ministry said.

Father Ebram Mikhail, the archbishop of the Helwan district, told CNN that worshipers still inside the church could hear the machine gun firing rounds for about 15 minutes.

Badr Mohamed Badr, a fruit seller, witnessed the attack from his stall and said he saw a shooter on a motorcycle fire a gun at a police officer. He said he saw two attackers, one watching the road and the other firing a machine gun.

A security cordon was put up at the scene and officials were inspecting the site.

Egyptian President Abdel Fattah el-Sisi gave his condolences to the relatives of victims in a statement released by his office.

"The Presidency of the Republic reiterates that these desperate terrorist attempts will not undermine the resolve and the entrenched national unity of the Egyptian people, but will only increase their determination to continue on the path to eliminate terrorism and extremism from their country," the statement read.

Friday evening, crowds of Coptic Christians packed the Helwan district's archbishopric to attend a funeral service for victims of the attack.

According to state-run media outlet Ahram Online, the head of the Coptic Orthodox Church, Pope Tawadros II, expressed his sympathy to the victims.

"All condolences to their families and to the police, the church and to Egypt, which will still be strong and capable of defeating insensitive and dark and violence forces which have no conscience," Tawadros said.

Coptic Christians make up the majority of Egypt's roughly 9 million Christians and are the largest Christian community in the Middle East.

In May, gunmen killed at least 28 Coptic Christians aboard a bus traveling along a desert road on the way to a monastery.

On Palm Sunday, 49 people were killed in bombings at two churches in Tanta and Alexandria. ISIS claimed responsibility for the attacks, though it offered no proof of its connections to it.