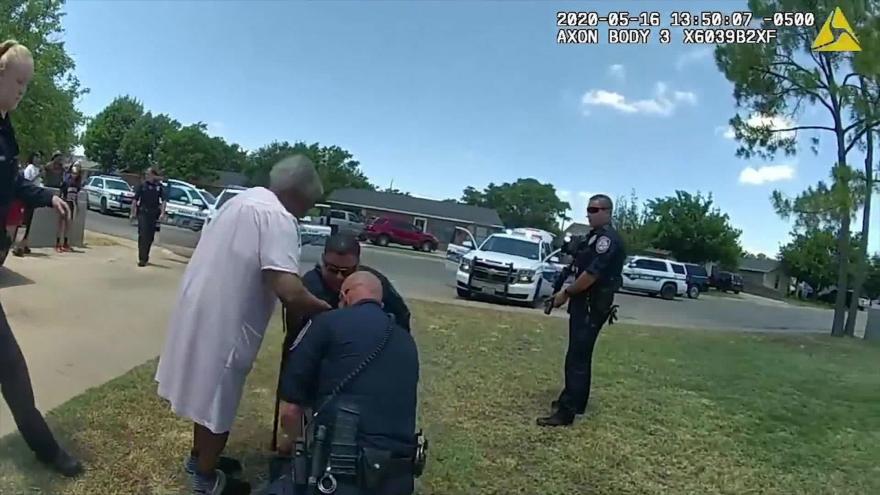 Midland police officers stopped Tye Anders, 21, on May 16 for running a stop sign, the department said in a statement.

(CNN) -- When police stopped a Texas man for an alleged traffic violation, the confrontation turned tense, videos of the incident show.

Midland police officers stopped Tye Anders, 21, on May 16 for running a stop sign, the department said in a statement.

What happened next left a family shaken, a young man on the ground and his grandma attempting to intervene in the tense confrontation that followed.

Anders, who is black, had been driving in a way that aroused suspicion, "making several extreme attempts to elude and avoid me," a Midland police officer wrote in an affidavit obtained by CNN affiliate KWES and other media. CNN has put in a public records request for the affidavit.

The Midland Police Department released footage on Facebook from an officer's dash cam video and a 36-minute bodycam video on May 22, six days after the incident. The video does not show the alleged traffic violation; police say it "occurred prior to activation of the video system."

In the dashcam video, officers say Anders drove for two blocks after the cruiser's lights went on. Anders then can be seen pulling into his grandmother's driveway.

Anders was charged with evading in a motor vehicle while police were attempting to detain him, according to a statement from Midland police.

Justin Moore, an attorney for Anders, says his client was racially profiled, and that there was no justification for his arrest.

After Anders pulls into the driveway of his grandmother's home, police can be seen and heard on bodycam video asking Anders to get out of his car, but he initially refused. He stayed in the car for over five minutes before exiting, according to timestamped police bodycam video.

When Anders did leave the vehicle, an officer can be seen on video drawing their gun and pointing it at him, according to police bodycam footage.

"I do not fault the officers for drawing their weapons," James A. Gagliano, CNN law enforcement analyst, said. "When he (Anders) wasn't compliant they (police) had to be suspicious that there was something more there because he was running away from a ticket for running a stop sign. That's not normal behavior."

Police said they asked Anders to walk toward them to be detained, but Anders refused and can be heard in body cam video asking, "Why'd you stop me?" with his hands in the air.

Moments later, Anders can be seen on bodycam video dropping to his knees to lie down on the front lawn.

"We're not going to shoot you," an officer can be heard saying to Anders.

The incident happened over a week before the death of George Floyd in Minneapolis after being held down by police while being arrested. Video shows Floyd pleading that he is in pain and can't breathe. Then, his eyes shut and the pleas stop. He was pronounced dead shortly after.

"This was a case of police officers not just doing their job," he said of Anders' arrest, "but going above and beyond to be patient and to let this play out when this young man put his hands down by his waist and refused to comply."

In the police video and in one from a bystander provided to CNN by Anders' attorney, Anders shouts, over and over, "I'm scared, I'm scared, I'm scared," and, "Put your guns down" while he's lying down on his stomach in the front lawn parallel to the driveway he stopped his car in.

"Hey dude, just stand up, stand up man," an officer can be heard saying to Anders. "All we need you to do is stand up."

At one point, Anders' 90-year-old grandmother appears in police bodycam video in an attempt to defuse the situation. Officers approached the elderly woman, and moments later she appeared to fall across her grandson.

It's not clear from the footage how the woman fell. Midland police say she "appeared to lose balance and fall."

Moore claims she was "forced to the ground by overly aggressive Midland PD officers."

At least five police cruisers and five other officers can be seen in police bodycam video.

In the affidavit, the officer writes about calling for backup when Anders refused to get out of his car. The officer called for "additional units to assist" when "Anders family members now began driving up to the scene and exiting the residence."

In the bystander video, a woman nearby is also screaming at the officers: "He's scared. Y'all have guns on him." And later, "We're black. They shoot black people."

Moore claims the police stopped Anders with no justification.

"Racial profiling and pretext stops have been at pandemic levels in this country for generations," Moore said in a statement. "This incident falls within this age-old trend of following black men and arresting them for fabricated reasons."

After helping the elderly woman get up, the officers were able to arrest Anders. After he was handcuffed and in the back of a squad car, Moore claims Anders was "struck multiple times in the face."

In police bodycam video, officers can be seen and heard telling Anders to place his legs in the car while explaining why he was pulled over. However, Anders kicks his legs out the door while screaming several times, "I did not run no stop sign."

Police say a sergeant grabbed Anders around the head to "lay him flat and control his movements" and used "physical strength to pull his (Anders') body back in the vehicle. No strikes were thrown."