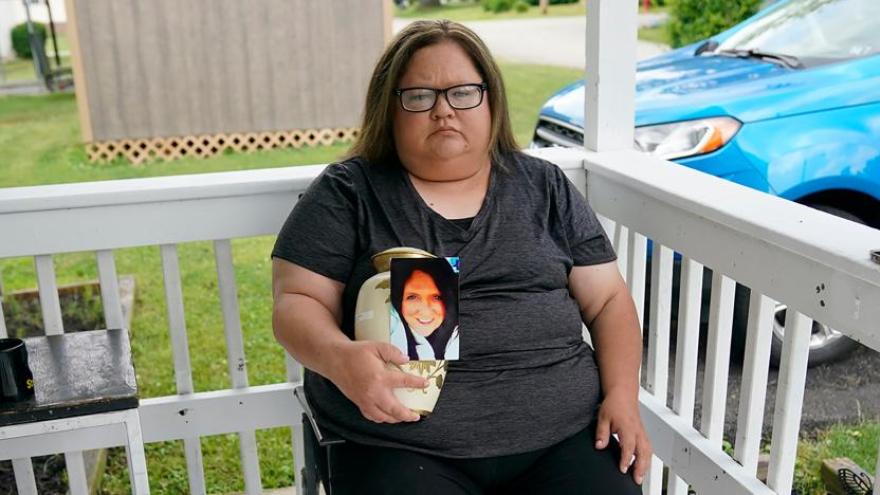 Kelly Titchenell holds a photo of her mother Diania Kronk, and an urn containing her mother's ashes.

(CNN) -- Two years after a 911 dispatcher in rural Pennsylvania refused to send emergency medical assistance to an ailing woman, he was charged with involuntary manslaughter, according to court records.

Dispatcher Leon Price was also charged with recklessly endangering another person, official oppression, and obstruction of the administration of law or other government function related to the July 2020 incident, according to the records.

Around July 1, 2020, Kelly Titchenell called Greene County 911 emergency dispatch to get medical help for her mother, who was jaundiced, incoherent and bleeding because of a hole in her esophagus, according to a civil lawsuit filed by Titchenell in Pennsylvania's Western District court.

When Price answered the 911 call as a dispatcher, Titchenell told him that her mother, 54-year-old Diania Kronk, needed to go to the hospital because she was turning yellow, making noises and had been lying in bed for days, the complaint said.

At the time, Kronk was living at her boyfriend's house in Sycamore, Pennsylvania, where there was no cell service, according to the complaint.

Titchenell says in the complaint that she told the dispatcher, "She is going to die if she doesn't go to the hospital."

Price allegedly told Titchenell that her mother may refuse to go with emergency personnel to the hospital, the complaint said. He instructed her that before an ambulance could be dispatched, she would need to call back from her mother's house and confirm she wouldn't refuse services, the filings allege.

Price turned himself in on June 29 on the charges, and was arraigned and released on $15,000 bail, Greene County District Attorney David Russo told CNN.

Price can't formally enter a plea until after his preliminary hearing dates in August and September, a court clerk told CNN. But until then, a not-guilty plea was automatically entered following the informal arraignment hearing, Russo said.

CNN reached out to Price and his attorney for comment but did not hear back.

Titchenell filed a federal lawsuit against Price, Greene County and two other employees of the county's emergency communication dispatch center over the incident, according to court documents.

The suit alleges that Price did not have the authority to deny services to Kronk and says "his actions were a direct and/or proximate cause of" Kronk's death. Titchenell is seeking punitive damages for her "emotional injury," court records show.

It is still unclear why Price didn't listen to her plea to send an ambulance to Kronk's house, Titchenell told CNN, adding that her mother was not in the right state of mind during the 911 call.

There were emergency medical service vehicles available for deployment at the time of the call, according to the complaint.

"These parties will be vigorously defending that matter," attorney Marie Jones, who is representing Greene County and the two other employees, told CNN.

CNN was unable to identify an attorney for Price in the lawsuit.

"I have no animosity toward Mr. Price. I hope he can find peace and forgiveness," Titchenell's attorney, Lawrence Bolind Jr., told CNN. "Unfortunately, what happened to Ms. Kronk must not happen to anyone else in the commonwealth. That is why the civil lawsuit was filed."

Officials plan to evaluate the county's emergency call policies as part of the trial.