Duck boat tragedy investigation could take a year to complete 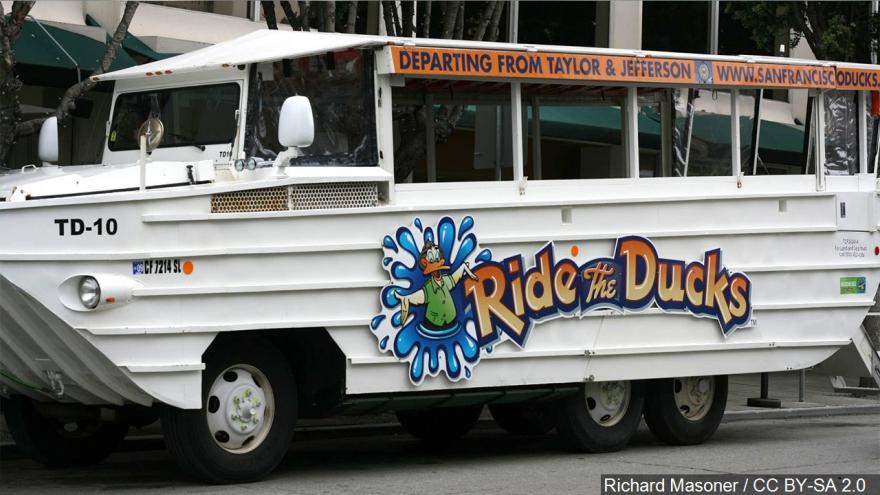 (CNN) -- The investigation into the sinking of a duck boat that killed 17 people in southwestern Missouri --- including nine from one family -- could take up to a year to complete, the National Transportation Safety Board said.

The Ride the Ducks Branson amphibious tour boat had 31 aboard when it sank Thursday evening during an intense squall on Table Rock Lake near Branson. Fourteen survived, but the rest -- ranging in age from 1 to 76 -- perished.

Video recorded by a nearby witness shows huge waves -- pushed by furious winds that had arrived ahead of the storm -- crashing head-on into that boat and another duck boat just ahead of it. It's unclear why the doomed boat took on water and sank while the other pushed on safely to shore.

Also unclear is what the boat's two-person crew knew about the storm before it arrived. It had barreled toward that area for hours from northeastern Kansas, with a severe thunderstorm warning being issued for the Branson area about a half-hour before the boat sank.

The NTSB urged witnesses to share any videos or photos and warned it could be awhile before there's a final conclusion on the case.

"We will do an analysis of the facts and approximately one year later -- one year from now -- we should have a probable cause and a report for the general public," the NTSB's Earl Weener said Friday night. "We can expect to have a preliminary factual report in a couple of weeks to a month."

Mourners light candles for the victims

Dozens of people left flowers, cards and balloons at a vigil Friday at the Ride the Ducks building in Branson. Mourners lit candles around cars left in the parking lot overnight -- believed to belong to the victims.

"I look at my family here, and this could've been us," Ed Brown, who was at the vigil, told CNN affiliate KMIZ.

After all 17 bodies were recovered, the Stone County Sheriff's Office released the names of those who died.

Nine members of one extended family from Indiana -- all with the Coleman surname -- died.

Two others from that family were on the boat and survived: Tia Coleman and her 13-year-old nephew.

Coleman told CNN affiliate KOLR that when she was in the water, she couldn't see or hear anyone. She said she yelled, screamed and then let go.

"And I started floating ... to the top. I felt the water temperature rise to warm ... and I saw the big boat that sits up there," she told KOLR from a hospital bed, referring to a riverboat docked nearby. "And when I saw they were throwing out life jackets to people and I said, 'Jesus keep me, just keep me so I can get to my children. Keep me, Lord.' "

The driver of the boat was also among the dead. A second member of the crew, the boat's captain, survived.

Among the issues facing investigators will be what the crew knew about the approaching storm system. According to weather data, the storm traveled hundreds of miles before it hit the lake, prompting severe-weather alerts as it moved along.

Radar shows the first wind gusts arriving at the lake ahead of the storm, at 6:59 p.m. Authorities received the first 911 call about the boat's sinking at 7:09 p.m., the sheriff said.

The storm was part of the same upper-level weather system that produced damaging wind gusts earlier Thursday in Kansas and spawned destructive tornadoes in Iowa.

On Friday, CNN asked Jim Pattison Jr., president of Ripley Entertainment Inc., the duck boat business's parent company, what the crew knew about the thunderstorm warnings when the tour embarked.

"My understanding was that when the boat went in the water, it was calm," Pattison told CNN's "New Day." "And partway through coming back is when ... the waves picked up and then obviously swamped the boat."

A tour lasts about 70 minutes, with about half on land and half on water, the company's website says.

The boat sank 40 feet down and then rolled to an area 80 feet deep, Stone County Sheriff Doug Rader said.

Life jackets were on the boat, but there is no regulation mandating that duck boat passengers wear them, Pattison said Friday.

Asked whether passengers were able to access them, Pattison said: "We don't know that yet."

In addition to the life jackets and the weather situation, investigators will look at the boat and the actions of the crew, officials with the NTSB and US Coast Guard said.

'They are death traps and sinking coffins'

Duck boats are amphibious vessels that travel on both land and water, and are popular among tourists in major cities. The boats' history dates to World War II when such vessels were a common sight due to their versatility.

In Branson, a popular family vacation destination about 200 miles southeast of Kansas City, Missouri, they are driven along city streets for part of the tour before the driver uses a ramp to enter the lake.

Thursday's sinking in Missouri isn't the first time trouble with these tour vessels have turned fatal. At least 39 people have died in duck boat accidents in the past 20 years. Accidents in and out of the water have marred their popularity and forced some companies to shut down their businesses.

The NTSB issued recommendations after one of those accidents -- the sinking of a duck boat in Hot Springs, Arkansas, in 1999. Thirteen of the 21 people aboard died.

The NTSB determined that the vehicle sank because it took on water quickly and didn't have reserve buoyancy, meaning there was nothing to help it float. The agency said that the boat's canopy was a major impediment to the passengers' survival.

Of the seven people found dead inside the vehicle, four were found trapped in the canopy.

"The safety board is particularly concerned that both adults and children wearing life jackets are at risk of being drowned if entrapped by the overhead canopy," the report reads.

On Friday, US Sen. Claire McCaskill, D-Missouri, said the recommendations were never enacted into law. She said she and her colleagues would take a look at legislation, possibly as early as next week.

"I'm not going to rest until we get something in the law on a national basis that does a better job of regulating the safety of amphibious vehicles," she told CNN on Friday.

Jeffrey Goodman, who has represented people injured in past duck boat accidents, said the vessels should be banned.

"They are dangerous on land and on water. They are death traps and sinking coffins," he told CNN.

The NTSB and multiple duck boat companies declined to comment on the safety issue.

Ride the Ducks Branson said it was deeply saddened and has closed the business due to the investigation and to allow the community and families time to grieve.