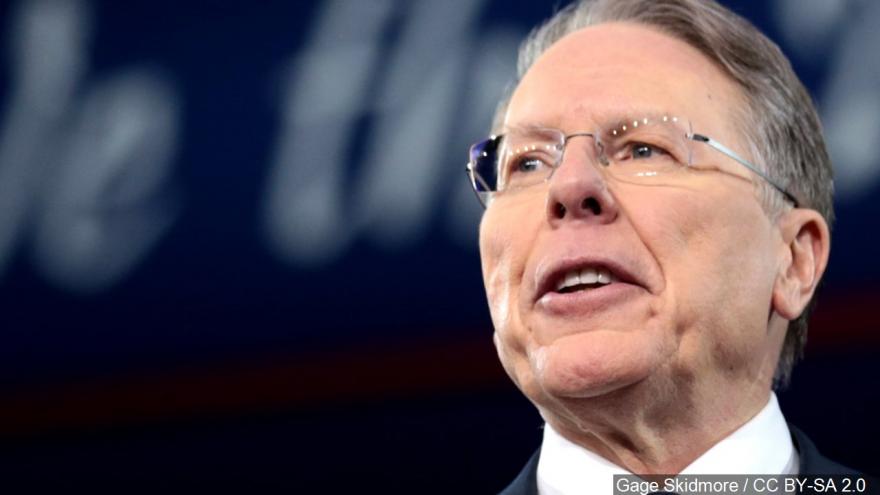 INDIANAPOLIS (AP) — The National Rifle Association, facing internal turmoil over its financial management, increasingly partisan tone, and legal threats from government regulators, beat back efforts to overhaul its operations. Wayne LaPierre, the public face of the gun lobbying group for decades, fended off a backlash and was re-appointment Monday as the gun lobby's CEO.

It was unclear if the debate that has roiled the 5-million-member organization in recent weeks would still lead to significant changes in its operations. In recent days, retired Lt. Col. Oliver North lost a bid for a second term as president and the next likely successor was passed over in favor of Carolyn Meadows. But most of the board remained intact and despite a very public tussle with its longtime public relations firm, which has received tens of millions of dollars to steer its message, the board did not formally sever ties with it.

Despite the turmoil, LaPierre struck a cheery tone in a statement after the board meeting: "United we stand. The NRA board of directors, our leadership team, and our more than 5 million members will come together as never before in support of our country's constitutional freedoms."

For the past two decades, the NRA has faced criticism from among its ranks that its leaders had become corrupted by the millions of dollars flowing into its coffers. The criticism has included allegations of self-dealing and excessive personal spending. Now the pressure has increased, with New York's attorney general opening an investigation that could threaten the group's tax-exempt status.

The NRA's charter was originally filed in New York, giving authorities there broad latitude to investigate its operations. Newly elected New York Attorney General Letitia James has made no bones about her dislike of the NRA, calling it a "terrorist organization."

"I never thought this thing would ever get to the level it got," Joel Friedman, an NRA board member since 2002, told The Associated Press before the 76-member board met to decide whether organizational changes were needed to stave off punitive action by New York authorities.

Just last year, an investigation by the previous New York attorney general led President Donald Trump's charitable foundation to dissolve amid allegations it was operating as an extension of Trump's business empire and presidential campaign.

The prospect of scrutiny by New York authorities led the NRA last year to hire an outside law firm and to ask its vendors to provide documentation about its billings. The NRA in recent weeks sued Ackerman McQueen, the Oklahoma-based public relations firm that has earned tens of millions of dollars from the NRA since it began shaping the gun lobby's fierce talking points in the past two decades. The NRA accused Ackerman McQueen of refusing to provide the requested documents.

Ackerman McQueen turned the NRA from an organization focused on hunting and gun safety into a conservative political powerhouse. The firm created and operates NRATV, an online channel whose hosts often venture into political debates not directly related to firearms, such as immigration and diversity on children's TV.

The NRA has faced some financial struggles in recent years, losing a combined $64 million in 2016 and 2017, and that has prompted some to question whether the large sums spent on public relations and NRATV are worth the money. In its lawsuit, the NRA said some of its members have questioned NRATV's weighing in on "topics far afield of the Second Amendment."

The turmoil boiled over Saturday when retired Lt. Col. Oliver North, a conservative stalwart aligned with the public relations firm and host of NRATV's "American Heroes" segment, was essentially ousted from his role as NRA president after trying to force LaPierre out.

According to LaPierre, North tried to strong-arm him into resigning by threatening to expose damaging information about the NRA's finances — specifically, allegedly excessive staff travel expenses — as well as sexual harassment allegations against an employee and accusations that LaPierre had charged tens of thousands of dollars in wardrobe purchases to his expense account.

North's own contract with Ackerman McQueen raised alarm bells within the NRA about the costs and possible conflicts of interest. LaPierre, in a letter to the board, noted that of the 12 TV episodes Ackerman McQueen promised to deliver, only three have aired.

NRA insiders in recent weeks have described an operation with warring factions, a place where some are compensated richly, driving expensive cars and wearing fancy clothes, while most rank-and-file are paid so little that they hold down more than one job and risk being ostracized or fired if they question expenses.

"Right now, it looks like the NRA has become like a self-licking ice cream cone," Allen West, a retired Army lieutenant colonel, conservative commentator and relatively recent NRA board member said in a video interview with the website Tactical Rifleman. "A lot of money is being raised just to scratch the backs of certain — a cabal of cronyism."

Trump weighed in Monday in defense of the NRA against New York authorities.

"The NRA is under siege by Cuomo and the New York State A.G., who are illegally using the State's legal apparatus to take down and destroy this very important organization, & others. It must get its act together quickly, stop the internal fighting, & get back to GREATNESS - FAST!" he tweeted.