A 14-year-old fell to his death from the new drop tower ride at Florida's ICON Park, authorities say 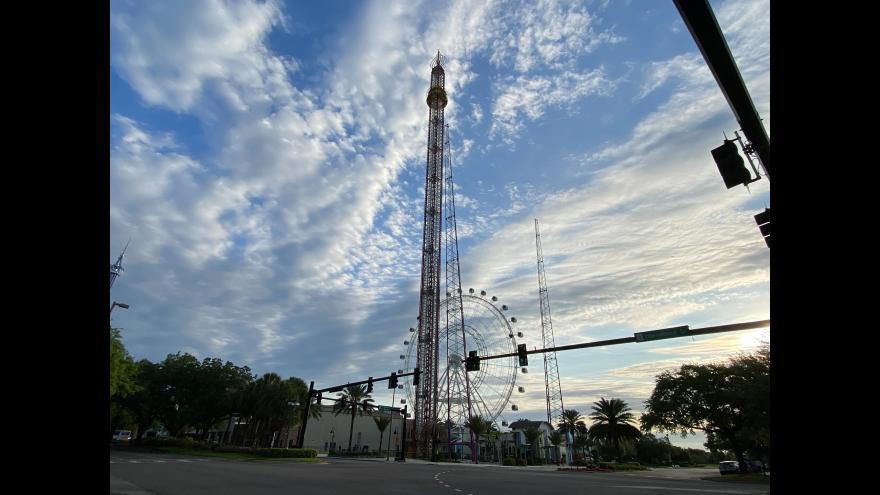 A 14-year-old boy died on March 24 after he fell from a drop tower amusement ride at the Orlando area's ICON Park entertainment complex, authorities said. The Orlando FreeFall ride at ICON Park recently opened in January.

In video circulating on social media that purportedly shows the incident, a person falls from their seat about five seconds into the ride's drop down the tower, as the vehicle decelerates before it reaches the ground.

Deputies were called to ICON Park around 11 p.m. Sampson was taken to a hospital, where he died from his injuries, the sheriff's office said. Details about what led to the fall were not immediately released.

Sheriff's investigators will determine whether the incident was an accident or intentional, and from an initial investigation, "it appears to be a terrible tragedy," Orange County Sheriff John Mina said.

'I want to know what really happened'

Sampson was an honor roll student and an aspiring football player, his father Yarnell Sampson told CNN. Tyre was visiting Orlando with his football team over spring break, his father said.

His son "was a very good young man. He was a big teddy bear, a gentle giant," the elder Sampson said, adding Tyre was a "kindhearted kid" who would give the shirt off his back to anyone who needed it.

While holding back tears, Sampson told CNN he viewed the video of his son's death on Facebook.

"I saw the video of my son falling down, and I couldn't believe (it). My life stopped," Sampson said.

He added, "I want to know what really happened. You know what, you know, why a 14-year-old young man with a bright future has been taken away from us."

The FreeFall is a 430-foot-tall tower and ride, with a vehicle encircling the tower that takes up to 30 riders to the structure's top. When the vehicle reaches the top, "it'll tilt forward 30 degrees and face the ground before free falling nearly 400 feet at speeds reaching over 75 mph," ICON Park's website says. The ride opened around Christmas last year, the company said.

The document from the Florida Department of Agriculture and Consumer Services noted the drop tower passed inspection on December 20, 2021. No deficiencies were listed in the report.

The ride was scheduled to be inspected again by FDACS in June, midway through the permit year, according to the department.

FDACS also stated the owner/operator is responsible for inspecting the amusement ride prior to opening each day of operation.

The boy was secured in the ride's seat, an official with the company that operates the ride told CNN affiliate Spectrum News 13.

"Yes (he was secured in the seat). That's what we know at this time. So again, we operate the ride with all the safety precautions in mind and everything is in place and this is why we're doing an investigation," John Stine, sales and marketing director for the Slingshot Group, which operates the ride and two others at the park, told Spectrum News 13.

In an interview with CNN, Stine said the company is heartbroken over Sampson's death.

"We are devastated by what happened to this young guest of ours," Stine told CNN Friday.

The ride has been closed until further notice while the incident is investigated, and the company said it is working with the sheriff's office and officials on a full investigation.

"Right now, the last thing on our mind is getting the ride operational," Stine said. "We want to find out what happened to this young man and safety is paramount for us, both with our guests and our employees."

Stine said there had never been any problem with the drop tower ride. "We've been operational for almost three months. And it's performed wonderfully. And this is what's so perplexing," he said.

ICON Park released a statement saying a "tragedy occurred last night at the Orlando FreeFall and our hearts are heavy with sadness."

"The owner of the attraction is fully cooperating with authorities and ICON Park is doing everything we can to assist," the statement reads.

FDACS will investigate issues surrounding the ride and its safety, Mina said. The agency has statewide responsibility to inspect all amusement rides in Florida, except for those at large parks that have more than 1,000 employees and have full-time inspectors on staff.

Its inspectors will be at the site Friday "with our investigation underway," department spokesperson Caroline Stonecipher told CNN.

The sheriff's office has not gotten previous complaints about the ride, Mina said. But he stressed that FDACS would be responsible for examining any such complaints.

The video purporting to show the incident is recorded from the ground, just outside the attraction's gate. Before the ride begins, riders sit in their seats, with a harness over their shoulders and chest, the video shows.

The vehicle eventually starts its ascent. About two-and-a-half minutes later, the descent begins.

Roughly five seconds into the drop -- perhaps two-thirds down the tower -- a person falls from one of the seats as the vehicle decelerates.

People scream, and the camera pans to show a body on the brick floor at the tower's base.

"Call the ambulance! He just fell," someone yells. As the ride lowers to ground level, riders plead for workers to let them off.

A worker appears and asks ride attendants whether they are sure they checked the rider. They say that they did.

"Our safety harness that goes over the chest of the rider is sufficient, and obviously we're going to look into this further. We're going to work with all the authorities, and that's all we can share at this point," Stine said, according to Spectrum News 13.

ICON Park includes a variety of offerings, including rides such as a 400-foot-tall observation wheel; Madame Tussauds Orlando; and SEA LIFE Orlando Aquarium.

CORRECTION: An earlier version of this story misspelled the victim's name based on information from authorities.