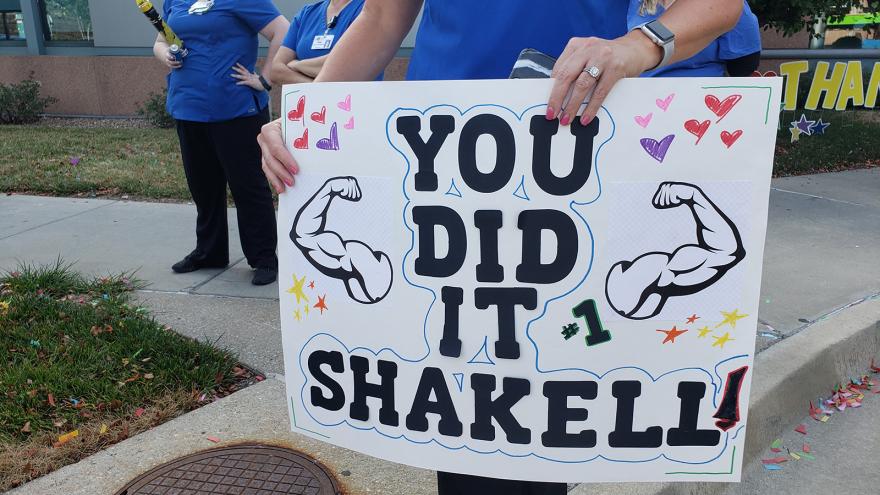 (CNN) -- On Saturday, as people across the country celebrate America's independence, Shakell Avery will celebrate a different kind of freedom.

"It feels amazing," Avery told CNN. "After knowing what all I've been through, it's still kind of hard to wrap my mind around. But I'm very thankful and grateful that I'm still here."

Avery, who turns 24 on July 4, recently returned home after spending 76 days in a Kansas hospital -- many of them sedated and on a ventilator -- battling the novel coronavirus.

"I'm going to be at home, safe and sound with my family," said Avery, a barber from Kansas City, Missouri, when asked how he would celebrate his birthday and Independence Day. "There will be plenty of other birthdays, I'm sure, down the line where I can make up for this one."

For now, Avery is focused on sharing his journey with other people his age and warning them to take the coronavirus seriously, as cases in the US rise among young people.

"You're just as at risk as anybody else," Avery said. "You can be the healthiest person on Earth, and you still risk your life every time you carelessly go out here and act like it's not real."

"It's very real," he said. "I was almost taken away from my family."

By the time Avery arrived at Menorah Medical Center in Overland Park, Kansas, on April 6, he says he had what felt like every Covid-19 symptom, including chills, high fever and body aches. But what worried him most was his shortness of breath.

"Even if I was to take a deep breath it felt like someone was choking me," he said.

Avery says he remembers very little of what came next. Once he arrived at the hospital, Avery remembers getting out of his car and into a wheelchair. He has a faint memory of being wheeled into the intensive care unit.

"I don't want to say I started to panic," he said, "but I was definitely scared. That's not a normal patient room. That's where you're critically ill."

Before getting sick, Avery had taken precautions to ensure his family's safety amid a lockdown, like making sure there was enough food.

'Older people were getting this virus'

Shakell's mother, Willetta Avery, says her son first started getting sick in late March, when some health guidance had not developed into what it is now. At the time, US officials were still discussing whether to issue mask guidance, and the World Health Organization encouraged people to wear masks only if they were sick.

"My take on it was that older people were getting this virus and they were more susceptible as far as getting really sick from it," Willetta Avery said.

"To hear my son was going through this was very, very terrifying," she said, adding that things "got real" when she learned her son needed a ventilator.

"And not knowing much about ventilators ... it scared me to know that he was going to have to be on one of those," she said. "That's when the seriousness of his illness just kind of slapped me in the face."

Willetta Avery remembers getting a call from the hospital at 4:30 a.m. on April 11.

"They were basically telling us Shakell was maxed out on ventilation support, that there was not much else they could do," she said.

The hospital finally allowed her to see her son.

"It was as if I would be seeing him for the last time," she said.

Avery's doctors at Menorah Medical Center collaborated with physicians at Research Medical Center in Kansas City -- both are part of the HCA Healthcare system -- to treat him with convalescent plasma.

The treatment involves the intravenous application of blood serum from recovered patients in the hopes their antibodies can help kick-start a patient's immune response. The method is being tested experimentally against coronavirus infections, and it remains unclear whether it helps.

According to HCA Healthcare, on April 20 Avery became one of the first patients in the region to receive convalescent plasma after they obtained it from a fully recovered Covid-19 patient in New York. Willetta Avery says that after receiving the plasma, her son's condition started to improve.

"I will never forget the first day he opened his eyes after we turned down his sedation," Jessica Knox, a registered nurse at Menorah Medical, told CNN affiliate WDAF. "I called his uncle and was like, 'Oh my God, he's awake, like we've turned a major corner.'"

After Shakell came to, he still had trouble fighting the virus.

"Being independent, you're used to doing everything on your own," he said.

But he needed help getting up and going to the bathroom. He couldn't speak or walk. He also struggled with depression in the hospital, particularly when his family would come visit him at a tent the hospital set up outside his window.

Avery eventually started to improve and he came off the ventilator. He started physical therapy and was sent to a full rehabilitation center, where he was discharged late last month.

Shakell returned to Menorah Medical Center with his family on Tuesday to thank staff for helping him.

Footage from CNN affiliate KMBC shows Avery outside the hospital with a walker -- and a mask -- wearing a black shirt that reads, "I beat Covid-19." Some nurses who greeted his family carried signs that read "Shakell Strong" and "Shakell, you're our hero."

"I was more than grateful," Avery said. "I could have said 'thank you' an infinite amount of times, and it wouldn't have matched the intensity of how grateful I was."

Avery has a message for young people, and he says that he wants to be "as blunt as possible."

"Every time you carelessly step out your door -- no mask or no empathy for anyone else's life -- you're counting your days," he said.

"My advice would simply be to try not to be selfish, but as selfless as possible," he said. "Because you're not just hurting yourself."