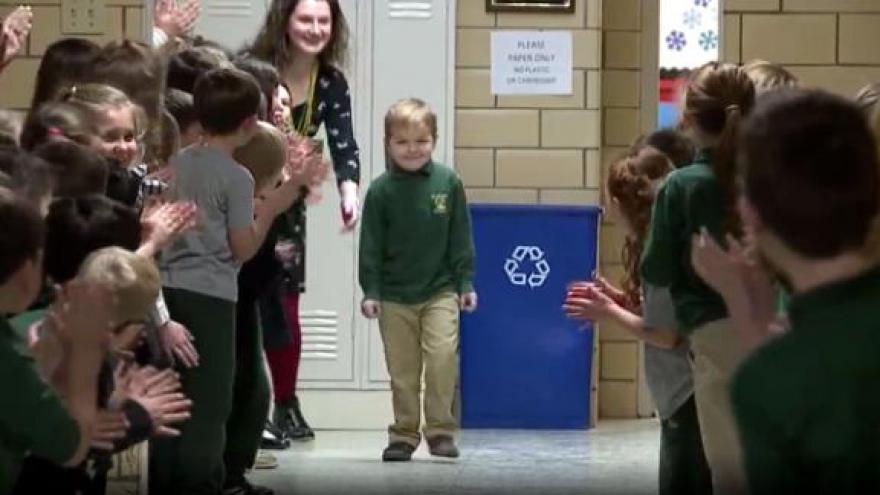 (CNN) -- A 6-year-old boy who has been battling cancer got a surprise standing ovation from his classmates when he returned to school after finishing his last round of chemotherapy.

John Oliver Zippay has been in and out of school for three years after he was diagnosed at age 3 with acute lymphoblastic leukemia in 2016, his father John Zippay told CNN.

On December 27, John Oliver got his last round of chemotherapy. To celebrate John Oliver's return to school in Newbury, Ohio, his classmates welcomed him back with applause, smiles, high-fives and cheers, as seen on video posted on Facebook.

It all started around Halloween of 2016, John and his wife, Megan said, when John Oliver fell and hit his head on the headboard of his bed. He face become discolored and he was lethargic, according to John. After taking their son to the doctor -- and several blood tests later -- their doctor called in the middle of the night urging them to get John Oliver to the emergency room.

"It was a real shock because that's when the word cancer started getting thrown around," John said.

All signs pointed toward a form of leukemia.

John said as soon as he and Megan heard that, "Everything just stopped right there and then."

The couple, along with their older daughter, spent 18 days thereafter in the hospital with John Oliver while he had bone marrow biopsies, blood transfusions and several tests done.

After John Oliver was given his diagnosis, the next three years consisted of all different types of chemotherapy and procedures.

The side effects were very strong and that's what made if difficult for John Oliver to do some of the normal things kids do at that age, let alone be at school on a consistent basis, according to his dad.

Even though the 6-year-old missed so much school he never fell behind academically, St. Helen Catholic School Principal Patrick Gannon told CNN affiliate WJW. "Him having to miss some of the time was tough, but the class was just so happy to see him come back," Gannon said.

Throughout John Oliver's treatment, Megan documented the good days and the bad on a Facebook group for her son's support system to follow along.

"We consider ourselves so lucky and so blessed," John said. "We've had so much support from family, friends, community members, the school and hospital staff."

On John Oliver's last day of chemotherapy, the nurses, family and friends gathered around so that he could ring the bell that patients ring when they finish their last treatment.

"And that's when I told him, 'okay buddy, you gotta ring the bell. Ring it for all the kids who didn't have the chance to ring it' and it's like everything went into slow motion for me," John said. "He rang it so hard, he was so proud."

John said he's really looking forward to seeing his son do all the things that normal kids should be doing at that age now that he is in a healthier stage of life.