A 70-year-old employee known as 'Taco Bell Joe' received a $6,000 tip from his community 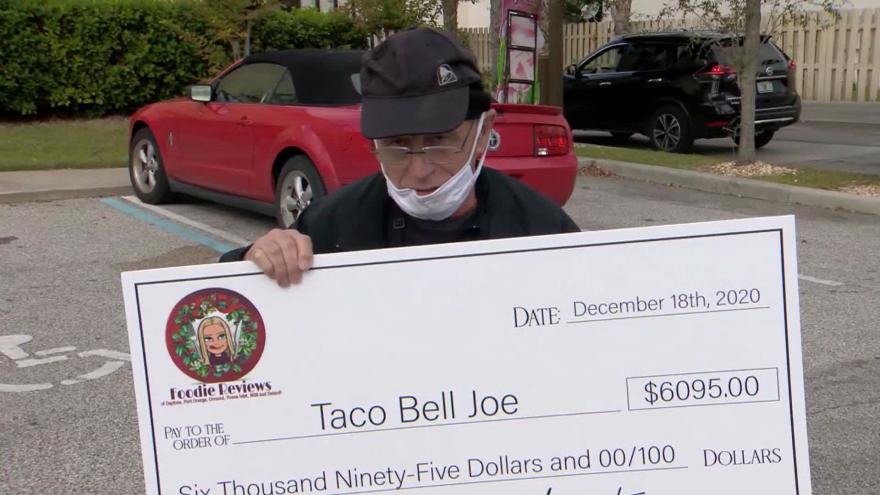 Joe DeCicco holds the $6,000 check. DeCicco has worked at the drive-through window of a Taco Bell in South Daytona, FL, for nearly 20 years. Credit: WESH
By Alaa Elassar, CNN

(CNN) -- A Taco Bell employee so loved by his community that he's known as "Taco Bell Joe" received a $6,095 tip raised by hundreds of his supporters.

For nearly 20 years, Joe DeCicco has worked at the drive-through window of a Taco Bell in South Daytona, Florida. He refers to all his customers as friends, remembers his guests by name and his contagious smile makes it hard for anyone to forget him.

So when Tricia Phillippi started a contest asking people to nominate their favorite local food industry worker -- who would then receive a prize -- it wasn't hard to see why DeCicco won by a landslide.

When Phillippi met him on December 18 and gave him the check, DeCicco was in tears.

"It's my customers that I owe this to. They bring out the best in me. It's them. I couldn't do it without your help," DeCicco, 70, said in a video showing the heartwarming moment. "And I'm going to do my best to live up to it, and spark a light, a little candle in every heart of every person that I meet."

As the coronavirus pandemic began, Phillippi created a Facebook group dedicated to supporting struggling local restaurants. To keep people active, she hosted contests with small awards she paid for herself.

"I had our members nominate their local favorite in the service industry and the person who wins will get a $50 gift card," Phillippi told CNN. "Within literally five minutes, the first nomination was Taco Bell Joe. Comments kept flooding in on him, calling him a legend, saying how much they love him. So when he won, I decided to let people donate to the holiday cash prize, too."

Instead of giving him $50, Phillippi launched a Facebook fundraiser on December 7 and invited people to donate so DeCicco could be surprised with a big tip for the holiday season.

Initially, according to Phillippi, the goal was to reach $300. But within a few hours, the donations surpassed that number. When she raised it to $500, it quickly reached over $6,000 in a matter of days.

"I cried almost every day for weeks because it's not just about Joe, it's about the bigger picture," Phillippi said. "It's crazy how much of an amazing experience he gives people, and it's just a Taco Bell drive-through. This year has been so hard, we're all hurting between the pandemic and politics, so this goes to show you that there is still humanity."

More than 300 people donated to the fundraiser, with many leaving comments recounting their stories of Taco Bell Joe.

One couple mentioned how they would go through the Taco Bell drive-through when they had a bad day because DeCicco lifted their spirits. Another person said they would even bring their out-of-state guests to meet him so they could witness his kindness.

"This job has been an enormous blessing to me," DeCicco said. "It has bought out the best in me. I have wonderful customers, they give me strength, they give me wisdom, they give me vitality. And these wonderful people are the true meaning of Christmas."