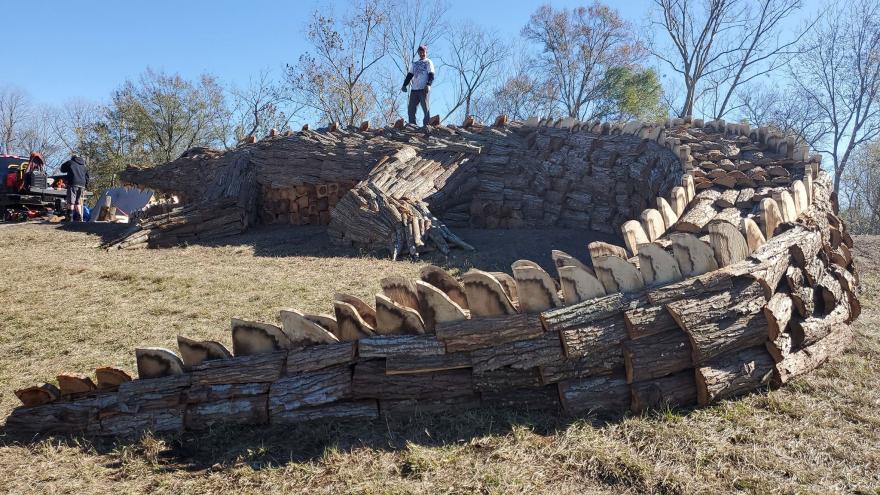 (CNN) -- A group of friends in Louisiana have been following a longstanding tradition of building massive holiday bonfires that are big enough to stop anyone in their tracks. But instead of going tall with their build, they went long with a 78-foot alligator display.

Josh Weidert, 33, and his group of friends have been building Christmas Eve bonfires in Garyville for about 20 years now -- something he said he hopes to continue and pass on to his own children in the way that his family did for him.

Tradition dates to the early 1700s

Christmas Eve bonfires are part of a tradition that Cajuns like to call "lighting a way for Papa Noel," Weidert told CNN. Who they call, the Cajun Santa Clause.

"A little folklore we tell the kids is that the bonfire is to guide Papa Noel down the foggy Mississippi River," Weidert said.

But the truth is, the tradition came about in the early 1700s when German and French settlers came to the area and brought the tradition with them, according to River Parishes Tourist Commission. Weidert. On the way to midnight mass, churchgoers would light fires so whoever was coming back and forth from mass could see and over time that grew and evolved into the Papa Noel story that is told today.

From A-Frames to animals

Weidert started building when he was 13 and said they designs started simple with a traditional A-Frame style bonfires. As his group become more experienced, they had the urge to break out of the mold and transition to atypical builds.

Together the group has constructed guitars, state banks, a memorial to breast cancer, turtles, crawfish, and a pelican -- the state bird of Louisiana.

In 2013, Weidert created a Facebook page, Blood, Sweat and Bonfires to showcase each year's creation.

"Whatever rings a bell with everybody" is how a design is typically chosen, Weidert said. The crew will get together, swap ideas and start putting pen to paper with mockups.

This year, Weidert said he started building the alligator's head at his own home and later transported it to the bonfire site to complete the rest of its body. It was completed on December 18.

Weidert said the goal is to finish the bonfires within three weeks with the team working on the project in their free time. This year's alligator design took about 21 days with time to spare before their deadline.

The materials the team uses are simple -- raw lumber.

"We try to use a lot of dead trees because they burn a lot better, Weidert said. "We'll go out in the woods and harvest our own materials by hand."

In order to continue this annual tradition, every year the team has to apply for a permit from the St. John the Baptist Parish and get an approval before the crew can get to work. This typically happens mid-November.

Weidert recognizes that the bonfires may not be everybody's cup of tea, but those who do appreciate the tradition flock to the area every year in anticipation just to see what the team has created, which he said brings him gratitude and joy.

This year, the alligator bonfire is scheduled to be burned at 7 p.m. on Christmas Eve, weather permitting.