A 9-year-old and her friends have raised nearly $100,000 selling bracelets to help black-owned businesses 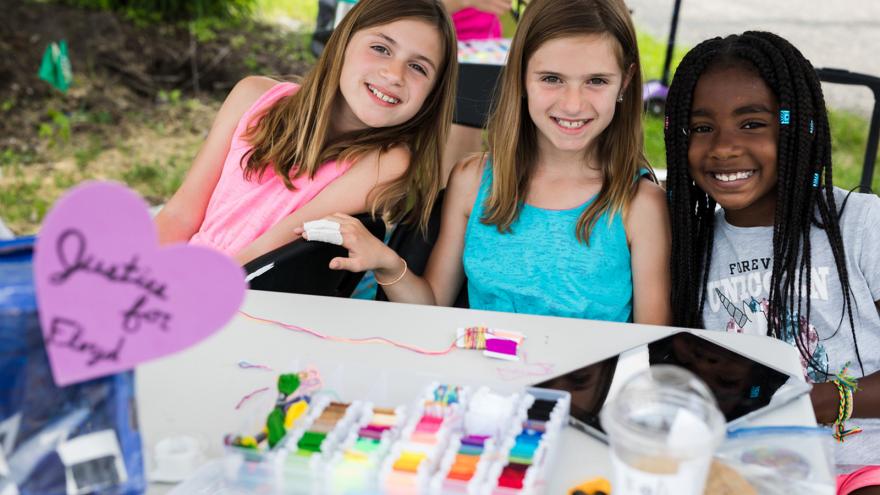 From left to right, Lexi, Mikayla and Kamryn at their stand.
(CNN) -- A group of friends with big dreams and even bigger hearts started a summer business that is helping black-owned businesses and neighborhoods in Minneapolis affected by the coronavirus pandemic and protests following the death of George Floyd.

Fueled by boredom and an itch for something new, 9-year-old Kamryn Johnson and five of her friends who live in neighboring Chanhassen decided to open a stand selling friendship bracelets.

After a lot thinking about where the money would end up going, the group agreed that the proceeds would be donated to businesses and food banks in Minneapolis.

Led by Kamryn, the group named their effort "Kamryn & Friends: Bracelets For Unity & Justice." Since setting up the stand on May 30, the kind kiddos have raised more than $90,000 through sales of the bracelets online fundraising and donations, according to Kamryn's dad, former NFL player Ron Johnson.

"She has a huge heart and simply wanted to be of help in whatever way she could," Johnson told CNN. "She and her friends are finding ways to feed the families of Minneapolis and give back to their community in the way they know how."

While the funds will be going toward helping various businesses damaged during protests, Johnson said the focus is on helping black business owners get back on their feet.

They had already been harmed by the coronavirus pandemic, which forced Minnesota into a statewide shutdown for a month. Then the May 25 death of black resident George Floyd triggered nights of protests and violence in cities across the country.

Scores of businesses in the Twin Cities -- Minneapolis and St. Paul -- were damaged or looted during days of unrest.

'When you look at Minneapolis, there is a huge racial gap in basically every aspect of life," Johnson said. "It's not equal. We want to be there for black businesses, especially those that don't have insurance agents to help them out, to let them know they have people that will protect and fight for them."

A portion of the money is going toward feeding the community and providing families with resources such as diapers and laundry detergent. The kids are donating some of their funds to Minneapolis' Sanctuary Covenant Church's food drive and the Kyle Rudolph food and supply Drive.

When the children first came up with the idea, Johnson said he expected them to raise "maybe $50 or something small." After news of their efforts unexpectedly began to spread, people across the country were donating to the cause.

But that's not the only impact the children are having on the movement.

"Day after day, we're having impactful conversations with so many people. So many of our community members have come by to drop off supplies, or just talk about things like racism and injustice, stuff that we don't talk about very often," Ron Johnson said.

"We want to stay in the fight. We don't plan on giving a bit and then walking away and going about our day. We're fighting for our community and it's not going to end any time soon. This is a fight for racial equality and an end to police brutality. It's something we still need to talk about."

While America is a long way from reaching true equality, for now, Kamryn and her friends will continue spreading joy by selling bracelets for as long as people are willing to buy them.