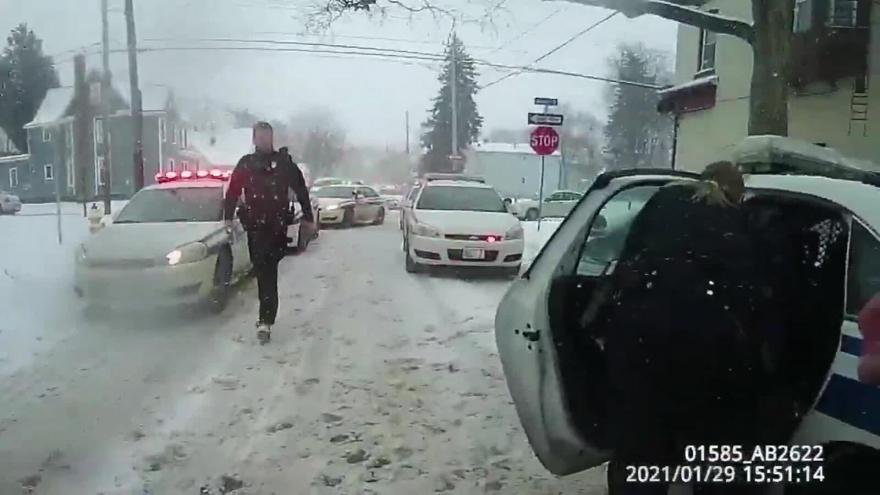 Rochester police officers, who were responding to a report of "family trouble," were seen on body camera video pepper spraying a 9-year-old girl.

(CNN) -- Police officers in Rochester, New York, handcuffed and pepper-sprayed a 9-year-old girl while responding to what a police official called a report of "family trouble" in an incident sharply criticized by city officials.

Two body camera videos of Friday's incident released by the police department on Sunday show officers restraining the child, putting her in handcuffs and attempting to get her inside the back of a police vehicle as she repeatedly cries and calls for her father.

After the girl fails to follow commands to put her feet inside the car, the officers are seen pepper-spraying her.

The girl was transported to Rochester General Hospital, where she was later released, according to Rochester Deputy Police Chief Andre Anderson.

The officers involved were suspended Monday, according to a news release from city officials. CNN has reached out to the police union for comment.

The incident has troubling similarities to the death of Daniel Prude, a Black man who died in March after Rochester police pinned him to the ground and placed a hood over his head as he experienced a mental health crisis.

The police body camera footage of that incident, released in August after city officials intentionally delayed its release, led to protests over the police's treatment of Black people and those experiencing mental health crises. Mayor Lovely Warren later fired the police chief, saying there was a "pervasive problem" in the police department.

CNN has not been able to verify the race of the 9-year-old with authorities or family members.

At a news conference on Sunday, Interim Rochester Police Chief Cynthia Herriott-Sullivan said that the police's treatment of the girl was not acceptable.

"I'm not going to stand here and tell you that for a 9-year-old to have to be pepper-sprayed is OK. It's not," she said. "I don't see that as who we are as a department, and we're going to do the work we have to do to ensure that these kinds of things don't happen."

Warren said the girl reminded her of her own young daughter.

"I have a 10-year-old daughter. So she's a child; she's a baby. And I can tell you that this video, as a mother, is not anything that you want to see. It's not," Warren said. "We have to understand compassion, empathy. When you have a child that is suffering in this way, and calling out for her dad, I saw my baby's face in her face."

Police responded to a report of 'family trouble'

Officers were called to a home on the afternoon of January 29 for a report of "family trouble," Anderson said Sunday.

The girl tried to flee from officers, Anderson said, and video released by police shows an officer chase her and attempt to provide assistance.

Afterward, he said, her mother arrived and the body camera video shows the two arguing. Anderson said officers then decided to remove the child from the situation and transport her to an area hospital.

But the girl refused to get inside a police vehicle, "thrashed around," and kicked an officer, knocking his body camera around, according to Anderson.

The body camera video shows the girl repeatedly crying out for her father, while being physically restrained by officers. She is seen screaming before her head is held down against the snow-covered ground and is handcuffed. A struggle ensues between the girl and officers as they attempt to get her inside the back of a police vehicle.

At one point, one officer says, "You're acting like a child."

"I am a child!" the girl responds.

The officers involved in the incident were not identified by police, nor were the child or her mother.

Anderson said Sunday he was "not making any excuses for what transpired" and that the department is "looking at a culture change." The department is in the process of reviewing many policies and looking to make changes, according to Anderson.

Mayor Warren said she has directed the chief of police to conduct a complete and thorough investigation of the incident and said she welcomes the review of what happened by the city's police accountability board.

After Monday's officer suspensions, she said what happened was "simply horrible."

New York Attorney General Letitia James said in a tweet Monday that her office is looking into the incident as well.

"What happened in Rochester on Friday is deeply disturbing and wholly unacceptable. Such use of force and pepper spray should never be deployed against a child, period. My office is looking into what transpired, but it's clear that drastic reform is needed at (Rochester Police Department)," James said.

Gov. Andrew Cuomo said in his state and across the nation, the relationship between police and community is "clearly not working."

"Rochester needs to reckon with a real police accountability problem, and this alarming incident demands a full investigation that sends a message this behavior won't be tolerated," he said.

As in Prude's case, the law enforcement response to the girl underscores the struggles of police to properly deal with people experiencing mental health crises or threatening suicide.

Warren said Sunday that she had spoken with the girl's mother and that the city's person in crisis mental health team would be reaching out to the family.

"It is clear from the video that we need to do more in supporting our children and families," Warren said.

New York Civil Liberties Union executive director Donna Lieberman said there was "no conceivable justification" for police to pepper spray a 9-year-old, and she called for a broader change in such responses.

"The Rochester Police Department has no business serving as the first responder in a mental health crisis that calls for mental health expertise," she said in a statement. "It's time for a full transformation of community safety, beginning with extracting the RPD from responding to mental health crises and putting trained mental health professionals in charge."

The Rev. Lewis Stewart, president of the United Christian Leadership Ministry of Western New York, said the police response was part of a "pattern of inappropriate and inhumane behavior," including Prude's death.

"This incident ... highlights the urgency of the need to press forward regarding reimagining and reinventing the police and public safety," Stewart said in a news conference Monday morning.

He called on the officers involved to be suspended without pay and federally investigated, and he said the Rochester Police Department should reevaluate its approach to dealing with minors.

"Minors should not be handcuffed. That must be banned," Stewart said. "Children must not be chemically sprayed. That, too, must be banned."

There was a small rally and protest march Monday evening, according to CNN affiliate WHAM. With temperatures in the 20's, dozens of people walked through the streets and stopped at a police precinct.

Correction: Earlier versions of this article gave the wrong day for the incident. It occurred Friday.