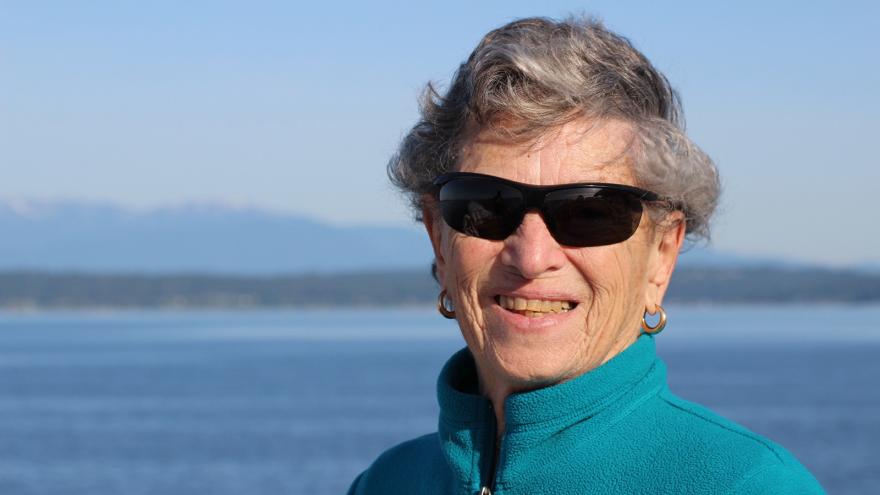 Fran Goldman is an avid walker so she decided a little snow wasn\'t going to stop her from getting her Covid-19 vaccine. - Courtesy Ruth Goldman

(CNN) -- Many people in the US are determined to get their Covid-19 vaccine, but a 90-year-old Seattle resident showed just how motivated she was by walking six miles in snow to make her appointment.

Fran Goldman told CNN that she had been trying to get an appointment since they became available in Washington. She said she and her daughter, Ruth, would try multiple times a day without success. Finally, Goldman found a spot at the children's hospital for Sunday, February 14.

But there was a potential problem.

Forecast of snow creates a challenge

"There was a forecast of snow and some of the clinics were postponing their clinics until later in the week," Goldman said.

"Saturday, I woke up and there was a good 6 to 8 inches of snow on the ground, and I kept checking to see if the clinic I was going to was still open, and heard nothing."

So Goldman started to plan how she would make her appointment three miles away, considering the conditions. Her steep road was not plowed, and several cars had unsuccessfully tried to make the climb. So she knew Uber or driving was out of the question.

"I finally scored a spot; I wanted to keep it," Goldman said. "On a snowy Sunday the bus is not going to be keeping a very good schedule, so I decided 'Well, I will walk.'"

During the pandemic, Goldman said she has used walking as a coping mechanism, and three miles was not that far for her.

Since her normal walks are usually not in the snow, Goldman decided to go two-thirds of the way to see if the trek was possible and about how long it would take. Goldman determined she could make it in about an hour.

Getting the vaccine was important for two reasons

Goldman said the walk was beautiful and peaceful. On part of her journey, she was the only person on a bike trail covered in untouched snow.

When she got to the hospital, she checked in, successfully got her first shot, and walked right back home.

For Goldman, walking felt somewhat unremarkable, but she was determined to get her vaccine for two important reasons.

"Personally, so I feel more comfortable being out and able to go do my own shopping, which I miss, and spend more time with family and friends," Goldman said. "As a citizen, I think it's important for all of us to create immunity so we can get back to life as it was or as close to it as we can."