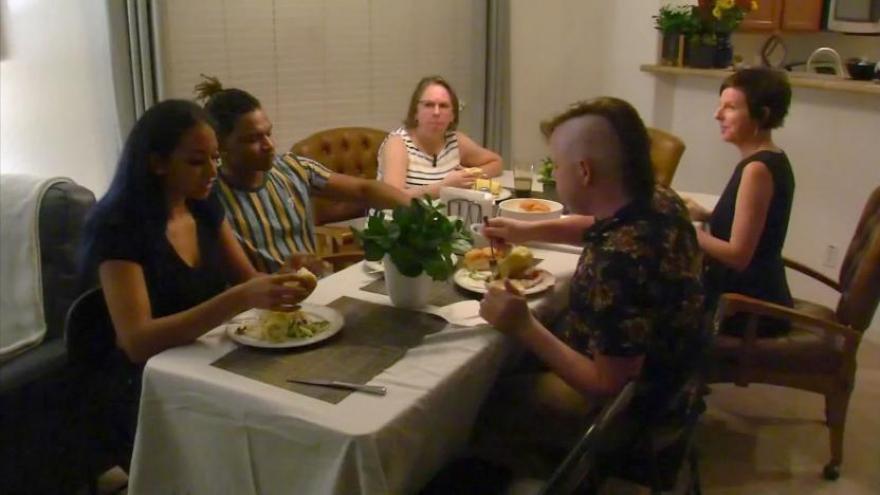 From left, Wanda Dench, her husband Lonnie Dench, Jamal Hinton and his girlfriend Mikaela Autumn. Lonnie Dench passed away in April from complication caused by Covid-19.

(CNN) -- Four years ago, a grandmother accidentally invited a stranger to her Thanksgiving dinner via text message. Ever since, they've celebrated the holiday together and despite the pandemic, this year was no exception.

Wanda Dench and Jamal Hinton celebrated their fifth Thanksgiving on Friday in Mesa, Arizona, but there was an empty seat at the dinner table. After 43 years of marriage, Dench's husband, Lonnie Dench, passed away in April from complications caused by Covid-19.

"I wasn't looking forward to it at first because Lonnie wasn't going to be there. The past seven months have been so difficult, but this was really important to me," Dench, 63, told CNN.

"I can't even explain how much joy I had, having good food with my favorite company. We laughed, we had a great time, we reminisced about the past. It was so good for all of us."

The two shared a Thanksgiving dinner with Hinton's girlfriend and Dench's daughter and grandson. The small group decided to celebrate Thanksgiving on Friday so they could get tested for coronavirus before celebrating with their own families so they don't risk spreading the virus.

"At first it was sad. We had a photo of Lonnie at the table with a candle lit, and we were all shaky in the beginning but it lasted five minutes before we were back to ourselves," Hinton, 21, told CNN. "We just told jokes and stories and shared our memories of Lonnie, so it was amazing."

From strangers to friends to family

Dench and Hinton are a pair of unlikely friends. All it took to bring them together was a couple of texts to the wrong number.

Dench, a grandmother of six, meant to text her grandson to invite him to her 2016 Thanksgiving dinner, but accidentally texted then 17-year-old Hinton while he was in class.

He was confused that someone claiming to be his grandma had texted him. She sent a smiling selfie of herself at work. She wasn't his grandma, but he asked if he could still have a plate.

"Of course you can," she replied. "That's what grandmas do ... feed everyone!"

So he showed up at her home to share the meal, and the two immediately became friends. Eventually, he and his girlfriend began going on regular double dates with Dench and Lonnie.

"It all has to do with this feeling. There's just this connection. It feels like we've known each other in past lives," Dench said. "There's absolutely no generational gap between us. The conversation just flows, we never run out of things to talk about."

When Hinton first showed up on Dench's doorsteps, he was worried there would be awkward silences or moments where he wouldn't know what to say. What he didn't expect was how she would very quickly become one of his closest friends.

"Whenever we met, we would spend four or five hours, just talking and talking. It was never awkward, Wanda and Lonnie became two close best friends to me," Hinton said.

"There's nothing about her that is mean, or uncaring. It feels like I have told her my whole life story, and she always listens and shares her own story. She's just the most loving person. She's pretty much perfect."

For Dench and Hinton, spending Thanksgiving together is a cherished tradition they both hope never has to stop. But without Lonnie, things feel a little bit different.

Lonnie passed away on April 5 after battling coronavirus and suffering from double pneumonia caused by the virus, according to Dench.

"I didn't believe I would have to go home without him," she said. "Even when he was in the hospital, I thought he would get better and come back to me. He was my soul mate. He was my biggest cheerleader."

What everyone remembers most about Lonnie, she added, was his kindness. He was known for offering random donations to hospice centers, paying for people's meals without them knowing, and helping anyone he sees in need.

Hinton's memories of him are no different.

"Lonnie was never the quiet guy. Right when I walked in the door the first time I met him, he didn't even reach out for a handshake. He just immediately pulled me in for a hug," Hinton said. "He was the kind of guy to always bring your hopes up whenever you felt down. Losing him was losing a best friend."

Hinton and Dench are still healing from their loss, and say Lonnie's memory will live with them forever. For now, they just hope his story will encourage people to be more careful during the pandemic.

"Just have patience," Dench said. "I know it isn't easy, and everyone is frustrated and just wants to get back to normal. But we need to have hope and always care about other people."