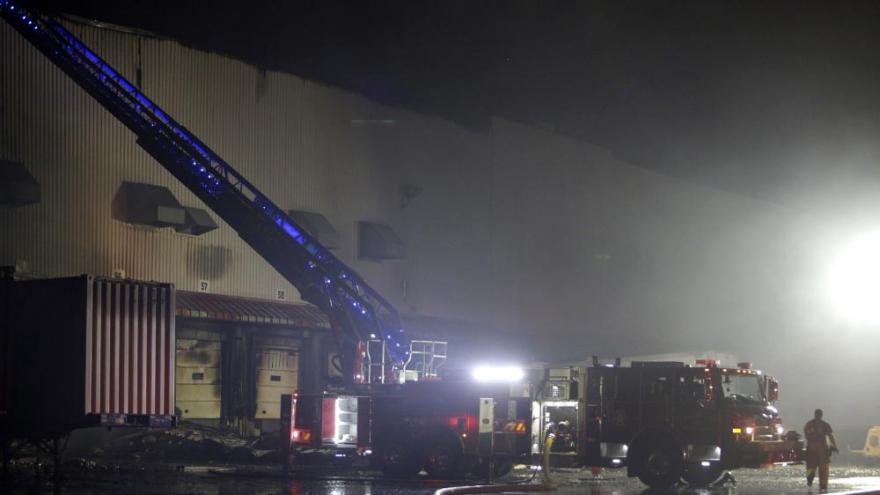 Firefighters work on cleanup after a fire ripped through a distribution center for the QVC home shopping television network in Rocky Mount, North Carolina.

(CNN) -- A body was found Sunday in a North Carolina distribution center for QVC, the shopping television network, one day after a five-alarm fire tore through the facility.

At least 75% of the building was destroyed in the fire, according to Corey Mercer, the fire chief in Rocky Mount, in the northeastern part of the state.

"At approximately 11:30 am, Fire Search and Recover members located a body on the outbound side of the loading dock of QVC," the Edgecombe County Sheriff's Office said in a news release posted on its Facebook page Sunday. "At 4:00 pm today the body was positively identified as 21-year-old Kevon Ricks,

"Our thoughts and prayers go out to the family of Mr. Ricks as well as all team members affected by this tragedy," the release states.

Fire officials were called to the QVC center, one of the largest employers in the county, around 2 a.m., when more than 300 employees were working at the facility, said Edgecombe County Manager Eric Evans.

One person was reported missing by his family, who had not been able to get in touch with him after the fire, according to Evans.

"I'm saddened by the loss of life during the QVC Distribution Center fire in Rocky Mount," North Carolina Governor Roy Cooper said in a tweet. "I've been in contact with local and state officials about that tragedy and taking steps to help families hurt by the loss of more than 2,000 jobs."

More than 40 agencies from six counties responded to the fire and worked throughout the morning, according to Mike Causey, North Carolina commissioner of insurance and state fire marshal.

"We are standing by to understand what this means economically to employees and we are ready to assist in any way we can," Rocky Mount Mayor Sandy Roberson said in a statement on his Facebook page thanking first responders.

More details regarding shipping and delivery will be released once the exact impact is known, QVC said on Facebook.