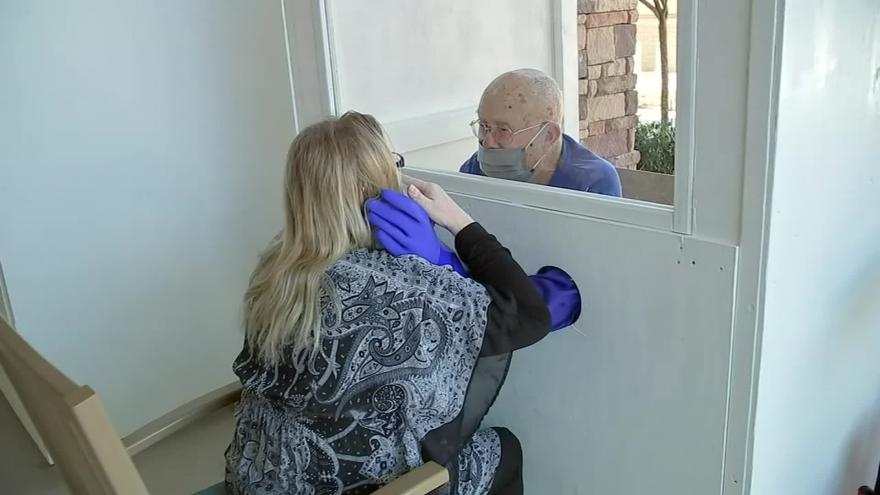 A resident of a Texas assisted living facility embraces a loved one using the \'hug booth.\' Credit: KTRK
By Alaa Elassar, CNN

But for thousands of nursing home residents across the United States who've been quarantining for months because of the coronavirus pandemic, hugs are a luxury they can't afford.

Luckily for residents of Heartis Clear Lake, an assisted living facility in Webster, Texas (about 25 miles southeast of Houston), an employee's idea came to life with the help of a teenage Boy Scout, who designed three "hug booths" that allow people to embrace without touching at all.

"In March, when things shut down, one of my residents told me the only thing she missed was human touch," Becky Hudson, the lifestyle director at the facility who came up with the idea, told CNN. "When she said that, I put my gloves on and held her hands and she was just crying. That's when I started thinking of ways for our seniors to be able to hug their loved ones without risking their lives."

To protect vulnerable seniors, many nursing homes and assisted living centers closed to visitors early in the pandemic. Some residents were even barred from leaving their rooms to interact with others who live in the same facility.

Across the United States, more than 100,000 residents and staff of nursing homes, assisted living centers and group homes have died of Covid-19, according to a Kaiser Family Foundation analysis of state-reported data.

In September, Hudson shared her idea -- a booth with gloves that would allow people to touch without skin-to-skin contact -- with local Boy Scout Troop 848 in hopes they would help.

Immediately, 17-year-old McCain Penrod decided to take on the project. For nearly a month, with the help of his dad, fellow Boy Scouts and friends, he tried out various designs before building three wooden booths.

Each booth features a plexiglass window, so loved ones can see each other, and two large, sanitized gloves for the senior residents to put their hands through to hug friends and family.

"When I was talking to some of the residents, I noticed this wasn't a want, but a need," McCain told CNN. "There was a lot of satisfaction to be able to provide that need, especially to those most vulnerable during the pandemic. The booths brought a slice of life back to a group that needed it most."

On November 25, a day before Thanksgiving, McCain delivered the booths to the facility. Since then, everything has completely changed for the nursing home residents, according to Hudson, who said she was "shocked" at how well McCain designed the booths.

"I immediately saw an enormous difference. Some residents who were normally active had become withdrawn when they stopped seeing their family members. Most of our residents have dementia and they were just confused why their children stopped coming to see them," Hudson said.

"They declined emotionally, but the hug booths came in and they could finally see them and hold their hands, and now they're finally doing activities again, they want to come down for their meals."

The project has helped residents so much that Hudson is now encouraging other nursing homes to build booths.

"The hug booths changed everything and I truly believe all nursing homes should have them," she said.