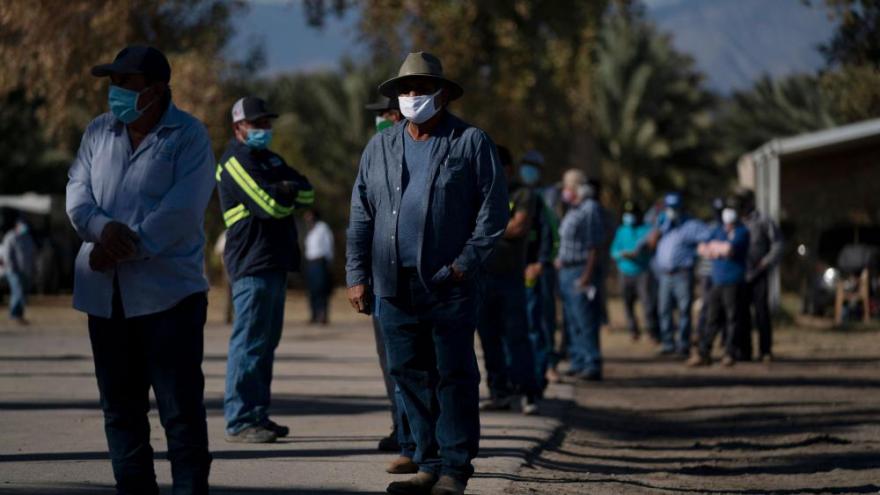 Southern California city, Coachella, is including farmworkers among those who must receive hazard pay for the risks they are undertaking during the Covid-19 pandemic. In this image, farmworkers wait in line to receive the Covid-19 vaccine in Mecca, California on January 21.

(CNN) -- A city in California is including farmworkers among those who must receive hazard pay for the risks they are undertaking during the Covid-19 pandemic.

Coachella, a Southern California city known for its popular annual music festival, passed an ordinance on Wednesday that requires retail pharmacies, grocery stores, restaurants and agricultural businesses in the city to provide additional compensation to their workers given the threat they face from the coronavirus.

Under the mandate, affected businesses that employ more than 300 people nationally or more than five people in the city will have to pay their workers an additional $4 an hour for at least 120 days. The regulation would also prevent businesses from retaliating against workers by limiting or reducing their pay.

Coachella follows several other cities on the West Coast that have required grocery stores to reinstate hazard pay for employees in recent weeks -- months after it ended for most workers.

But the city is unique in extending that requirement to agricultural workers -- and, according to the Los Angeles Times, Coachella Mayor Steven Hernandez has said the ordinance is the first of its kind in the nation.

The Coachella Valley, a region in Riverside County's Colorado Desert, is home to an estimated 8,000 agricultural workers, a majority of whom are Hispanic or Latino.

Those workers have been some of the hardest hit by the coronavirus crisis. A recent study conducted by the University of California, San Francisco, found that Latino food and agricultural workers experienced a 59% increase in mortality during the pandemic.

Beaman-Jacinto was among several council members who shared their thoughts on why they feel farmworkers should be included among the essential workers to receive hazard pay, also known as "hero pay."

Others who welcomed the measure included employees of Food 4 Less and Rite Aid, according to the Desert Sun newspaper.

Some groups opposed the measure

"Like all businesses during this pandemic, it's been a huge economic strain keeping things going," Joe Pezzini, president and CEO of Ocean Mist Farms, said during the council meeting. "It's unwise to add another financial burden to already struggling businesses."

Pezzini argued that if the council's intent was to protect farm workers, it should instead make testing and vaccines widely available to them.

Mayor Hernandez said that while he supported the measure to give essential workers extra compensation, he was concerned about the unintended consequences it could have on workers and businesses.

"This is an issue that I think we can all agree, that folks do deserve hazard pay," he said at the meeting. "The biggest question is, 'Who's gonna pay?'"

Hernandez suggested that the city step should step in to provide aid in the event that farms or store owners had to close their doors.

"I made the point yesterday that we have to think of unintended consequences and be ready as a council to respond to them," he wrote in a Facebook post on Thursday. "We have to make sure that in the event farms close, hour gets reduced, and/or farmers go broke- we can help."

Still, some council members maintained that the ordinance was intended to benefit the most vulnerable populations.

"The agricultural industry, which of course is going to face a financial impact if this hero pay passes, has always been opposed to any advances in pay or other protections for farm workers," Beaman-Jacinto said. "We can't let that silence the voices and needs of our residents that we heard tonight."