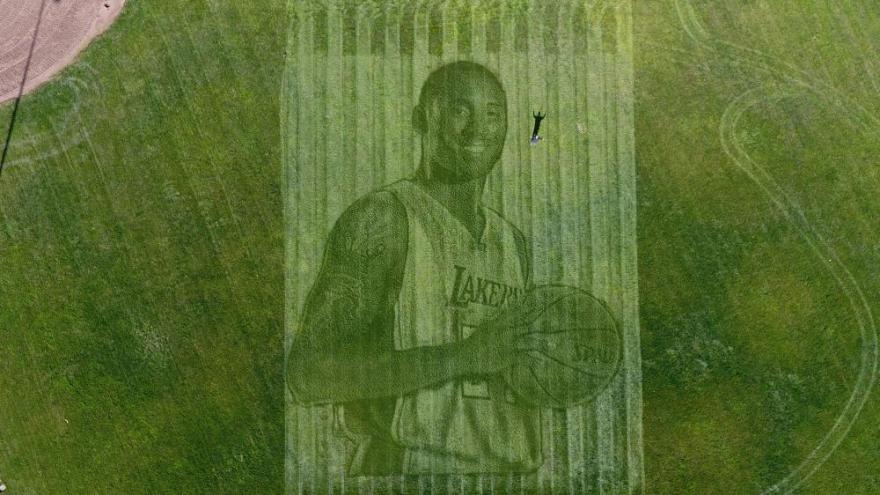 Kelli Pearson and her husband, Pete Davis, created a 115-foot tall mural of Kobe Bryant in a grass field in California.

(CNN) -- Tributes and murals of the late Kobe Bryant have been popping up all around the world. But one created by a California couple can only be seen from the sky.

Using the Turfprinter technology from their company, New Ground Technology, Kelli Pearson and her husband, Pete Davis, created a 115-foot tall and 92-foot wide mural of Bryant in a grass field at a park in Pleasanton.

The image was then loaded into a lawn mower-type machine that Davis moved around the field. With the help of GPS and digital processing, the machine blows air to gently bend the grass away or toward you to make up the dark and light contrast, according to Davis.

For the couple, who said they are big Kobe fans, the decision to create the mural was only natural.

"This tragedy came as a huge surprise. He was an amazing person, amazing family man and an amazing athlete," Pearson said. "Fortunately, we have this technology that allows us to do this huge tribute."

The mural will last for about two days before the grass returns to its normal position, but the couple is hoping the tribute will create a lasting effect on their community.

"For me, it's a community effort," Davis said. "You feel helpless and there's really nothing more you can do in the situation. But in our space, I did it to represent our community and let the community be a part of this closure."

The 41-year-old basketball legend, his 13-year-old daughter Gianna and seven other people were killed Sunday morning in Southern California in a helicopter crash.