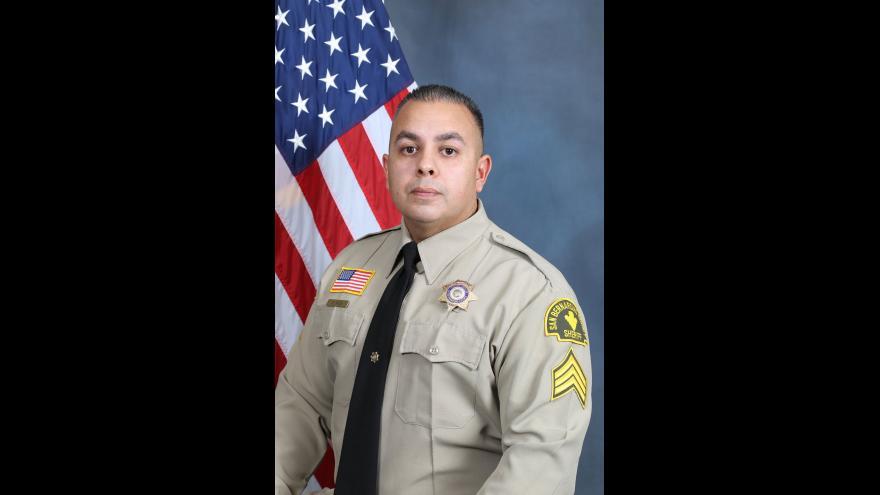 Sgt. Dominic Vaca died after being shot in the line of duty in San Bernardino county Monday.

(CNN) -- A 17-year veteran of the San Bernardino County Sheriff's Department in California has died after being shot in the line of duty Monday, the department said.

Sgt. Dominic Vaca, 43, was shot after pursuing a motorcycle without a license plate, San Bernardino Sheriff John McMahon said in a video statement posted to Twitter. Vaca died later in the day in hospital, the sheriff said.

Vaca and other deputies from the Morongo Basin Station were conducting extra patrols for off-highway vehicle violations in Yucca Valley, according to McMahon.

The deputies saw a man driving a motorcycle without a license plate and attempted to stop him. After a pursuit, the driver fled on foot into the desert, the agency said on Twitter.

When the deputies located the motorcycle they could not find the suspect, McMahon said.

"As they approached the motorcycle they attempted to locate the rider and the rider started firing at the responding deputies," the sheriff said, and one of his deputies was struck.

Vaca was airlifted to a local hospital, but "the gunshot wound he sustained earlier today was too severe for him to overcome," McMahon said in the video statement. "Our prayers are with him and his family as we all mourn this difficult time."

McMahon said that the suspect, who has not been named by authorities, was pursued by additional deputies and started shooting at them, prompting an exchange of gunfire that left the suspect dead.

A handgun was recovered from the scene, he said.