Car carrying 3 teens lands in icy pond; a guy who can't swim jumped in to save them 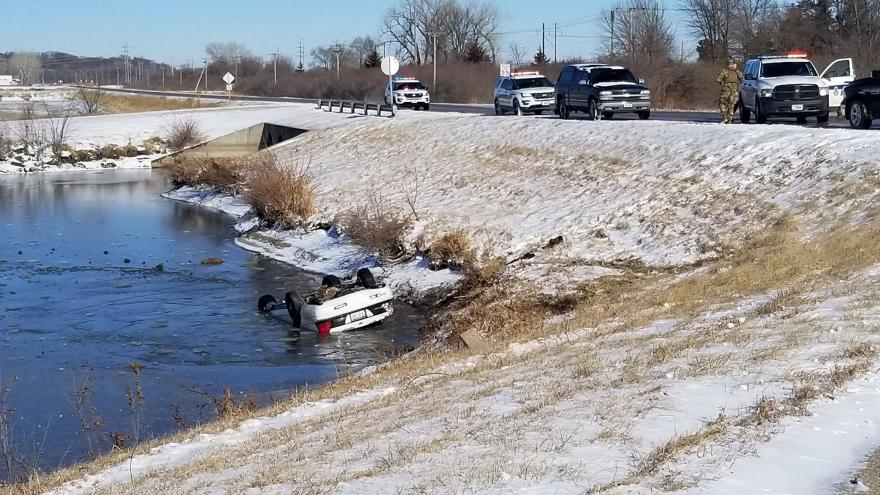 (CNN) -- Terry Ingraham went out in the bitter Nebraska cold Saturday to try to catch some shots of eagles, but his camera malfunctioned.

Sitting in his truck, trying to fix it, Ingraham instead caught sight of a dangerous wreck: a 2004 Crown Victoria with three teens in it crossed some railroad tracks, then lost control.

The car careened off the roadway, hit a fire hydrant and landed upside-down in a nearby pond.

Ingraham saw the car stop, fall through the ice and begin to fill with water.

Then Ingraham, who cannot swim, ran down a hill toward the pond. He heard someone screaming.

"Get me out! Get me out!" he remembered them yelling.

Unsure how deep the water was, Ingraham raced in. The air temperature measured in the 20s, he recalled, intensifying the icy water's bite.

The car kept filling with water.

Ingraham realized the pond, at least right there, only was knee-deep.

He tried to open the sedan's back door. It wouldn't budge.

He tried the front door.

It gave, and Ingraham pulled the 19-year-old driver, Jaxon Duin, out, he said.

But two more people were still inside, Ingraham said. And they weren't moving.

Ingraham grabbed someone, who immediately grabbed back at his arm, the photographer told CNN. He pulled that passenger to safety.

The last rider also held tight to Ingraham as he pulled them out, he said.

The three teens, including 19-year-old Anton Burkovetskiy and someone who's likely a minor, were taken to Nebraska Medical Center, Erhart said.

"A lot of people don't have to do that, or probably wouldn't," he said of Ingraham's rescue.

"The water is that cold. If he hadn't have been there very quickly, it could have been much, much worse."

Ingraham spoke with one of the teens' mothers via Facebook, he said, and she thanked him for saving her son's life.

"If I would have waited, there's no telling what would happen," Ingraham said. "I'm just a guy in the right place at the right time."